Posted in: Disc Reviews by Brent Lorentson on September 30th, 2014 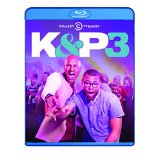 It’s been quite some time since The Chappelle Show went off the air, and it would appear Comedy Central has finally found its replacement.  I wouldn’t go so far as to say the show is on the same par, but what Keegan Michael Key and Jordan Peele bring to the small screen is something that has piqued my interest and shows some potential.  Both Key and Peele got their big break from working on the sketch comedy show MADtv, and it would seem they are taking their talents and what they learned to bring us something that is a little familiar but still fresh and keeps its audience laughing.

The biracial pair takes chances with their show which is a hybrid of live bits in front of an audience and filmed sketches.  Whether they are poking fun at Django Unchained, racial stereotypes or Latino gangsters, Key and Peele manage to keep it entertaining.

Now releasing their third season and with a new season about to hit the airwaves, are they hitting their stride, or have the jokes simply run dry?  Well, I think the answer is somewhere in between.  Sticking to some of their mainstay characters like Luther as well as the movie-obsessed Valet guys, these are welcomed returns for these bit characters that seem to always make me laugh.  But as the season stretches on well the material starts to run a bit dry.

The hit-or-miss nature of season three isn’t enough to deter me as a viewer, but it does have me worried that possibly the duo needs an injection of new writers or perhaps new actors to join in.  There are a few notable cameos in this season, none I’d want to give away since the cameos go hand in hand with the punchline.

With the negative out of the way, when they deliver a solid sketch, the two knock it out of the park.  In a segment where we see Luther, Obama’s translator, being used in a conversation with Michelle and her translator; this was the kind of segment that I wanted more of.  A more subtle segment that worked concerned a husband whose wife discovers her husband is using porn on their computer.  This was a segment that kept things simple and relied on a sight gag that just about everyone can relate to on some level when being questioned by a significant other.

Still, what is missing from this season is a sketch that you find yourself revisiting again and again.  Sure, there are laughs to be had, and there are many amusing sketches, but nothing as memorable as “A-Aron” or the husbands talking behind their wife’s backs.  The pair attempted to inject new blood in a segment, “Metta World News” but despite its return in every episode, for me personally it was a bit that just fell flat.  In fact, it seems when the jokes were running stale, it would lead to one or both of Key & Peele to find themselves in drag.  The occasional cross-dressing bit is one thing, but the pair find themselves in drag just about every episode.

Hopefully this is just a stale season and when they return for a fourth season we’ll see them bounce back with some fresh new material.  But I won’t be getting my hopes up.

Key & Peele is presented in its original 1.78:1 aspect ratio.  The 1080p image is arrived at with an AVC MPEG-4 codec at an average of 28 MBPS.  For a sketch comedy show this doesn’t look bad, but great wouldn’t be a word I’d ever use to describe this.  When they are up on stage in front of the audience the image is sharp and clear and we get a lot of detail.  But as this gets into sketches, it seems the darker it gets the flatter the image gets.  Not much shadow definition, and there is some banding issue but nothing major.  The image serves for what they are trying to accomplish and nothing more.  This season they do go for more retro style bits where we see some 80’s style VHS-looking bits.  The most notable of these is a commercial for a self-defense class; the attention to detail to make it look so amateur and like a multi-generation bootleg is excellent.

The Dolby TrueHD 5.1 track is nice here if not a little more than needed.  For the moments where they are live with the audience we are given clear audio.  The audience applause and cheers are there, but it never gets distracting. During the sketches we get a few moments where we might catch some ambient noise, but everything is relatively minimal and serves the Blu-ray release nicely.

Van and Mike Show:  Honestly, I found these bits to be funnier than most of the bits we get in the actual show.  All together we have seven segments with Van and Mike. These were characters played by Key and Peele that we were first introduced to in the second season supplements, and this time around the characters felt much more natural as they give their opinions on the show.

The Super Episode: The Best of Season 1 & 2: (21:36) As the title implies, this is a best-of episode where Key and Peele introduce their favorite bits they performed over the previous two seasons.

Outtakes: (5:32) I’m normally not a fan of outtakes, but this one actually has some entertaining moments where we see them break character.

While I enjoyed the previous two seasons of the show, I’m starting to worry that the guys have hit a dead end with keeping their jokes fresh.  Sure, there are plenty of laughs over the season, but unfortunately they are jokes we’ve seen before.  I like these guys and hope they can put together something that doesn’t feel so rehashed.  The guys can perform and entertain; the writing needs an injection of something fresh, but I haven’t given up on these guys just yet.

Brent Lorentson is a horror writer and film critic based out of Tampa, Florida. With a BA in Digital Film, he co-wrote and co-directed Scavenger Hunt. His short stories have appeared in various horror anthologies. In 2019 his short script Fertile Blood will be a part of the anthology horror film Slumber Party. He is currently working on his first novel A Dark and Secret Place set to be released in late 2019. Favorite Films: Taxi Driver, Fight Club, I Saw the Devil, The Wild Bunch, Dawn of the Dead, A Clockwork Orange, Pulp Fiction, Heathers, The Monster Squad, and High Fidelity.
The 100: Season 1 (Blu-ray) Criminal Minds: Season 9