Posted in: Disc Reviews by Gino Sassani on February 25th, 2015 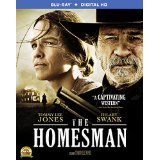 “There’s been some trouble with the women hereabouts…it’s bad.”

What exactly is a Western? That’s the question that the cast and crew of The Homesman struggle with here. They appear to be divided on the subject, and the same sentiment will likely make this one a little harder to pigeonhole. That’s not necessarily important except when it comes to marketing a film. An audience wants some kind of an idea what they’re getting when they see it on the shelf of their local video store. Tommy Lee Jones wrote, directed and stared in this period piece, and he’d rather you not call it a Western. Others connected with the film are on board with the genre label. I guess I fall somewhere in the middle. Westerns often deal with cowboys and Indians. Well… there are some brief Indians here. They don’t figure too prominently in the story, however. Other times the genre deals with gunslingers, bandits, or outlaws of one kind or another. Not so much in The Homesman. There are horses, and the cinematography certainly lends itself to the wide open spaces of the traditional Western. Usually Westerns take place in the period just after the Civil War to about the end of the 19th century. The Homesman takes place earlier, in 1854. One thing is for certain. It’s a frontier movie with Western elements that, in the end, might not really matter. Let’s call it a redemption story and leave it at that, shall we?

As the film begins we meet Mary Bee Cuddy, played by Hilary Swank. Cuddy, as we will be reminded throughout the film, is rather plain-looking and more than a little bossy. She’s single with property and animals out in the NebraskaTerritory. She’s well-liked but can’t seem to rope a husband even with her above-average station. Likely it’s less the plain look and more the bossy nature that keeps men near enough to be friends but far enough to avoid the M word. Still, Cuddy is doing better than some of the married women in the territory. Three of the ladies have gone mad. We’re talkin’ toys-in-the-attic insane. Disease is taking cattle, crops, and children, and it’s left a nasty mark on these women. Their husbands don’t know what to do.

There’s a church five weeks’ ride away that will take them in and try to return them whole to their families. Problem is that someone has to get them there in a wagon that looks more like it’s transporting desperados than batty women. The menfolk don’t step up, and it’s Cuddy who manages to have the task fall to her. Hey, it’s not like she’s got anybody waiting for her at home. So she sets out on the long journey.

Along the way she finds squatter George Briggs, who has been set up with a noose around his neck by vigilantes because he squatted in someone’s home. Cuddy sees an opportunity and saves George’s life, first securing a promise that he’ll assist her in her task. With few options left to him, George agrees. For a large portion of the film we watch them settle into the task.

The film’s greatest aspect is also its most limiting flaw. There are so many beautiful locations here, and Tommy Lee Jones lingers quite a bit during this journey. We get plenty of time to enjoy the vistas and enough intimate and quiet time with the characters that we get to know them quite well. Of course, you can only linger for so long before the pace of the film begins to feel bogged down in the mud, which is quite a feat when you consider the dry and dusty conditions of this particular landscape. The film eventually takes on the feel of hesitation. Lee is reluctant to move on and does so only as a last resort.

That kind of pace relies heavily upon the actors, and this is a good pair we have going here. Both Jones and Swank share some unique chemistry that’s actually stolen when the film can’t avoid the expected temptation. It’s a sad moment in the film, not only because I got the feeling that I lost these characters, but also because events also shift in an unexpected way. I won’t reveal that pivotal moment, but the film changes at this point, and not for the better.

I should warn you that Jones performs some sleight of hand here that does great disservice to his film. It is clear from the start that this is Cuddy’s story. Jones is an important part, of course, but Jones goes out of his way for 20 minutes to establish this as her story. And it is her story until quite suddenly it’s not. It’s really George’s story, and the shift was enough to take away the good faith Jones established with me for the first hour and a half. For me it’s a fatal flaw. The last act of the film finds Jones and his character of George Briggs much more awkward. He does things that come out of nowhere and honestly reveal Jones’ age a bit more than he likely intended. He goes a little Clint Eastwood, but in slow motion. I’ve never seen a rage go in slow motion like this one appears to go. There’s more than a little unintended comedy here. The final scene is almost as crazy as the three characters in the film. It’s one of those “what was he thinking” moments.

The screenplay by Tommy Lee Jones is based on a novel by Glendon Swarthout. I have not read the book, so I can’t say how much of the pacing and character shift problems are directly from the source material. It doesn’t really matter, though. As a filmmaker Jones has a responsibility here to remember that he’s making a movie and not narrating a book. I think he fails a bit here after establishing a pretty good start.

It’s also likely not an accident that the film appears almost like a play throughout. Jones stages his action very much like you might a live production. There’s little fluff here, and the action is almost never very dependent on the things around the characters. This would work just as well on a stage with a painted backdrop.  It worked for him quite well when he teamed with Samuel L. Jackson for The Sunset Limited, which was actually based on a play. It’s not as effective here.

Jones has a lot of respect in the industry, and it’s certainly deserved. That allowed him to populate his film with an outstanding cast. We have impressive names who were willing to show up for very limited parts. John Lithgow plays the town’s leader and pastor. James Spader delivers a very brief performance as a greedy hotel owner. Prison Break’s William Fichtner plays one of the husbands. Friday Night Lights standout Jesse Plemons plays another of the husbands. Of Course, Meryl Streep plays the woman who is willing to care for the three patients. It’s a major part, to be sure, but a brief one as well.

It’s likely Tommy Lee Jones was attracted to the film because of some of the themes that haven’t been explored so much in cinema. There’s certainly a lot here about the standing of women in those days as well as the state of mental health care. It’s also a chance to play in the playground of the Western landscape, even if he doesn’t want to think of the film in those terms. In the end this is very much a series of character studies.

The Homesman is presented in its original aspect ratio of 2.40:1. The 1080p image is arrived at with an AVC MPEG-4 codec at an average 25 mbps. This is a very beautiful film to watch. The cinematography is nothing short of outstanding. Fortunately, you’re given a high-definition image presentation that brings it all to you with wonderful detail and sharpness. It’s not a colorful film. The landscape is bleak and devoid of much vibrancy. However, there are moments when color provides striking contrast to that image. The bright blue clothes Jones wears at one point provide some splash. There are also the colorful buildings that once in a while stand out freshly-painted against the drab. Black levels are pretty solid.

The DTS-HD Master Audio 5.1 does more with silence than you might expect. This is a quiet and intimate film that accents the isolation and close quarters even in the midst of a vast horizon. It is in these moments that the sound design does its best work. There’s a lot of atmosphere here without the need for loud scores or distracting aggressive surrounds. Dialog is always the place where all of the audio is framed.

The Origin: (21:25) The writers lead this piece as cast and crew talk about the film’s vision. Jones goes down the list of characters and provides his own candid thoughts.

Shooting The Film: (27:18) I guess this is the behind-the-scenes feature, and there is plenty of footage of the film’s production. It’s very quiet and low-key, much like the film itself. There’s a lot of Tommy Lee Jones love-fest going on, followed by another for Swank.

Beyond The Western: (11:45) Cast and crew offer their differing thoughts on if this is indeed a Western or not.

There’s little doubt that mot of the people in this film are here for Tommy Lee Jones. It comes through in the bonus material and the fact that such an impressive list worked for much less than they usually get. It’s one of those passion plays where everyone worked hard and had a great time. That certainly comes across, but is it enough to take this film higher than its limitations? In the end, I have to say no. It’s a great rental. It’s worth seeing once. I don’t think there’s anything here I feel I’ll want to revisit, however. “Three crazy women and five weeks is a lot more than I bargained for.”

Gino Sassani is a member of the Southeastern Film Critic's Association (SEFCA). He is a film and television critic based in Tampa, Florida. He's also the Senior Editor here at Upcomingdiscs. Gino started reviewing films in the early 1990's as a segment of his local television show Focus. He's an award-winning recording artist for Omega Records. Gino is currently working on his 8th album Merchants & Mercenaries. Gino took over Upcomingdiscs Dec 1, 2008. He works out of a home theater he calls The Reel World. Favorite films: The Godfather, The Godfather Part II, The Body Snatcher (Val Lewton film with Karloff and Lugosi, not the pod people film), Unforgiven, Gladiator, The Lion King, Jaws, Son Of Frankenstein, The Good, The Bad And The Ugly, and Monsters, Inc.
Exclusive Interview With Director Jesse Baget & Producer Steven Barton Of Zombieworld Horrible Bosses 2 (Blu-ray)