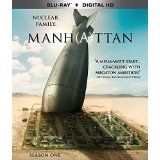 “There’s something I need to tell you. We’re building a weapon. It’s not like any weapon the world’s ever seen. It draws its energy from a fast-neutron chain reaction. It releases the power of an ancient star. If it works, and it’s going to work, it will be the more destructive than all the bombs dropped in all the wars in history put together. It’ll bring armies to their knees. Cities will disappear in the blink of an eye. The world will be united in peace by the most just and noble country in the history of mankind or it will burn to the ground. Whoever builds it first, there’s the endgame. So it has to be us, whatever it costs.”

It’s one of those dramatic stories where mankind is altered forever. If it weren’t absolutely true, someone would have had to make it up. Every child in schools around the world knows about the atomic bombs that ended World War II. We’ve all seen the terrible destruction that exceeded even the expectations of the scientists and engineers who designed and built these bombs. We all live in the aftermath of these events. Yet little is known about the people who devoted their lives to making it a reality, not only those directly involved, but their families and the support network necessary to bring them all together. Enter WGN America, and the tale is finally told. Now the first season of Manhattan, spelled as Manh(a)ttan, is available on Blu-ray from Lionsgate.

Manhattan was, of course, the code-name of the project that developed the bomb. It was so secret that even Vice-President Truman was left in the dark until the death of FDR placed the decision to use it squarely upon his broad shoulders. The workers and the support staff were housed in a small community where secrecy was the number-one priority. Manhattan explores all of the side effects of that secrecy. People live with paranoia and constant supervision. Their calls are monitored, and their mail is censored. Supplies are scarce. Women can be bribed into working overtime for a pair of nylons. Families have no idea what work their husbands, fathers, and even wives are doing. The series explores their experiences as much as those of workers on the project.

“A hundred American kids have been buried since the last time we walked through that gate. By tomorrow morning, there’ll be a hundred more. And you want me to slow down?”

Inside the project there are two competing groups. Frank Winter (Hickey) heads up the group that believes implosion is the answer. On board is his best friend Glenn Babbit (Stern), who attempts to be the calming voice of reason in the group. But he has some past associations that will come back to haunt him here. Helen (Herbers) is the lone woman scientist on the group. Paul Crosley (Lloyd) is a Brit and a little too full of himself. He can’t be trusted, and his disloyalty to his group will cost him dearly. Louis (Chernus) is the portly young one with dreams of comic heroes who makes the rookie mistakes.

The implosion model is, of course, the model that won out, but for now they are actually playing plan B to the gun-barrel model led by Reed Akley (Harbour). He is getting most of the resources. He’s just brought in Charlie Isaacs to get his design over its mathematical hump. Charlie ends up caught up in the rivalry and torn between the two sides.

Intentions might all be on winning the war, but both sides are willing to do things that border on treason to get their model to be the one built. Both teams work under the legendary Dr. J. Robert Oppenheimer (London). They also know they’re in a race with Hitler, who also has an advanced atomic project. While it may have been the Japanese who finally felt the sting of the completed bombs, the project was always planning to use the bomb in Europe on Germany. Of course, it didn’t work out that way, but the shadow of Hitler’s team stands quite menacing over the American project.

Outside of the project the base life is most demonstrated by Frank’s wife Liza (Williams). She has her own PhD in biology but finds she’s treated as a simple housewife by the politics of her age and living on a military base. Unable to stretch her scientific muscles, she resorts to investigations of what is being built at the base. Unfortunately, her own history will thwart her attempts to discover any kind of truth.

The base life is also explored largely through the relationship between Frank and Liza, but also Charlie and his young wife Abby (Brosnahan). She’s the daughter of a wealthy socialite who married against the wishes of her parents and now finds herself trapped in a lifestyle she finds worse with each passing day. There’s a lot of tension in these relationships, which only make the burdens of the husbands that much harder.

This is very good stuff here. There’s a real eye for detail and authenticity. While these stories are largely fictional, they play against a significantly historic background. While the Soviets were our allies, you can see the birth of what will become the Cold War with a West Wing favorite Richard Schiff as a government interrogation master, there to uncover spies and communists. Naturally, he was brought there by Thomas Schlamme, who pretty much made his mark on The West Wing. He brings that talent for creating wonderful character interrelations, and they abound here. The performances are all quite compelling. Still, the series is most effective when it takes us inside the heads of these complicated characters. That’s where the bird’s eye view of a particular moment in history becomes the most revealing. It also manages to keep us thoroughly engaged without the payoff of the bomb itself. We’re being taken on a slow ride here, but you’ll enjoy every minute of it.

Each episode is presented in its original broadcast aspect ratio of 1.78:1. The 1080p image is arrived at with an AVC MPEG-4 codec. The high-definition image presentation adds to the authenticity of the period piece. The colors are mostly warm with an accent on browns and oranges. The New Mexico scenery is rather drab and colorless, just as it should be. The buildings are also quite plain. It all builds to an atmosphere that puts you pretty solidly in a certain time and place. You get fine detail, and most important you get textures that bring the what would be dull images to life. It’s as good as television looks.

The DTS-HD Master Audio 5.1 won’t win any awards for dynamic sounds or aggressive surrounds. If you’ve seen the kind of work Thomas Schlamme has done in the past, you know it is all about the dialog. You get exactly what you need. There are a few rather nice musical cues just for accent.

There are commentaries for select episodes.

Ground Zero – Bringing The Bomb To Screen: (14:45) Cast and crew mostly talk about their characters. This is on the second disc but contains spoilers for episodes you may not have seen before. You should watch it after you’ve seen the entire season.

P.O. Box 1663 – Creating A City That Didn’t Exist: (10:09) This feature looks at the sets that were built out in the New Mexico desert. It was a 10-acre area that was transformed into this community. Tons of production design information can be found here.

Now I Am Become Death – J. Robert Oppenheimer: (9:57) This is a mini-bio on the scientist. Daniel London, who plays him in the show, also offers his take on the man.

Recreating An Era – Costume Design: (10:02) Of course, there has to be a feature on all of that period-piece wardrobe.

I love how the show captures the psychological aspects of these characters. It’s really fine work by writers, directors, and particularly the actors themselves. They were living with the largest secret on the planet, and many of them knew the ramifications for the world. It was the stuff of nightmares, and most were reluctant to do it. The only thing worse, for them, then creating this awesome weapon was the idea of Hitler getting there first. “Ever hear of Pandora’s Box?”

Gino Sassani is a member of the Southeastern Film Critic's Association (SEFCA). He is a film and television critic based in Tampa, Florida. He's also the Senior Editor here at Upcomingdiscs. Gino started reviewing films in the early 1990's as a segment of his local television show Focus. He's an award-winning recording artist for Omega Records. Gino is currently working on his 8th album Merchants & Mercenaries. Gino took over Upcomingdiscs Dec 1, 2008. He works out of a home theater he calls The Reel World. Favorite films: The Godfather, The Godfather Part II, The Body Snatcher (Val Lewton film with Karloff and Lugosi, not the pod people film), Unforgiven, Gladiator, The Lion King, Jaws, Son Of Frankenstein, The Good, The Bad And The Ugly, and Monsters, Inc.
Wild (Blu-ray) Exclusive Interview With Jamie Bamber Of John Doe: Vigilante