Posted in: Disc Reviews by Brent Lorentson on April 30th, 2015 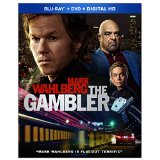 “I need to know what you are worth when I leave you nothing.”

These are the parting words that Jim Bennett (Mark Wahlberg) is left with from his dying grandfather.  At first these words may seem a bit harsh, but the more time we spend with Bennett we start to understand the grandfather’s intentions.  The Gambler, a remake of the 1974 film with same title, follows Bennett along his downward spiral as his gambling addiction drags him down to the point where death is imminent, yet death seems to be the escape Bennett so desperately craves.  In other words, this is not exactly the film you watch to get into the holly jolly spirit of the holidays.

Wahlberg steps into the role of college professor by day and terrible gambler by night with the kind of gusto I quite frankly didn’t think he had in him anymore.  The role of Jim Bennett isn’t simply a well-crafted character, but instead a role Wahlberg was born to play.  What is most shocking about this performance is that there is just about nothing likeable about Bennett.  His self-destructive gambling habits seem to be motivated by nothing more than being born over-privileged, and when he is given chances to be bailed out from his debts he simply manages to squander the money away, whether it be at a blackjack table or a roulette wheel.  But just like the brutal head-on collision you can’t look away from on the highway, we can’t look away from the impending implosion that Bennett is walking into as he racks up debts with numerous heavy-hitting criminals around town.

Bennett has a week to pay off his tab of $240,000, though he seems to have no desire to have his debt wiped away; instead he seems to be toeing along a suicidal path, only he is too afraid to do the deed himself.  It’s over the course of the week Bennett seems to make a breakthrough with some of his students, Amy (Brie Larson), a hungry writer who is in on Bennett’s after-hour secrets, and Lamar (Anthony Kelley), a struggling student who is a rising star on the court.  It’s these interactions with the students that bring life into his very glib after-hours lifestyle and manage to shine some hope into Bennett’s life.

I haven’t seen the original film that this was based on; this is something I plan on remedying as soon as I can.  But beyond the great performance that Wahlberg delivers, I couldn’t help but appreciate the look and the style of the film.  Too many films seem to want to glamorize this reckless lifestyle and make it seem fun and exciting, though what director Rupert Wyatt gives us is only a glimpse at this ugly world that exists in the dark alleys and behind locked doors where no one should go looking.  Wyatt presents a dark underworld that simply reeks of violence, but yet there is very little violence even depicted in the film, and when there is violence, well, let’s just say Bennett has had it coming for a long time.

With actors like John Goodman, Michael Kenneth Williams, Richard Schiff, and Jessica Lange filling roles throughout, the film is a caliber which you don’t see often enough in these gritty hard-boiled films.  This is a film that has an attitude about it where it knows it’s a good film, but this isn’t the kind of film that will break any records at the box office.  For me this is a film that is a little bit of Drive meets Rounders.  Neither film was a box office sensation, but those who saw the films and liked them, really like those films.  What’s most surprising is this may be one of the best-constructed films of the year. This is a film where every scene matters; there is no fat, and every dialog exchange has depth and drives the film in a forward motion.  This is where screenwriter William Monahan deserves the most credit; it is not often that a film comes along with not just great dialog where its characters are talking to sound cool, but writing that many would-be screenwriters should pay attention to.

The Gambler is presented in its original aspect ratio of 2.35:1. The 1080p image is arrived at with an AVC MPEG-4 codec at an average 35 mbps. The high-definition image presentation is quite good. Color is the key here, and while much of the film has a gray, monochromatic feel, that’s not completely the case. Color is a key component in building these distinct worlds. You’ll find the Asian scenes with plenty of olive green colors. The world of John Goodman’s mobster is saturated with red. The gangster world is noticeably black, but quite sharp with its contrast. You will be able to fully appreciate the production design, because the film is rich in textures. These seedy environments translate well enough for you to fully experience them. Black levels are strong, and you will be delighted by the range of shadows in the film.

The DTS-HD Master Audio 5.1 Dialog is crucial to this film. It is the conversations between this odd mix of characters that makes the film. Wahlberg’s monologues in the classroom are a particular treat for fans of the character study. Surrounds are almost never aggressive with the exception of a harsh music cue from time to time. Silence plays a role here that should not be underestimated at all. This is a case where the audio design must complement and never overpower the images.

Mr. Self-Destruct – Inside The Gambler: (14:12) Here you’ll learn plenty about the original 1974 James Caan film. You’ll get clips, and cast and crew offer the differences in the philosophies of making a remake/reimagining. Wahlberg talks about his emotional choices for his character, including some in conflict with the powers that be. Most of the behind-the-scenes footage centers on the classroom scenes.

Dark Before Dawn – The Descent Of The Gambler: (16:26) This is very much a production design feature. We look at certain choices in location, sets, and main themes of the movie.

Changing The Game – Adaptation: (9:02) Here we get some direct comparison with the 1974 film. You get clip comparisons while cast and crew talk candidly about making a new version.

In The City – Locations: (9:27) Visit the locations that build this underbelly of L.A.

Deleted Scenes: (23:40) There are six with a handy play-all. Most of this is extended versions of scenes already in the film.

This is a film that takes away the romanticized notion that all or nothing is ever a good thing.  This is a film that digs into the character flaws of people who seem to be obsessed with losing and can’t find happiness until they’ve done more than scraped rock bottom.  Jim Bennett does more than scrape rock bottom; he embraces it, and despite all those who wish to help him, only he can pull himself free of the darkness.  Whether it’s watching Bennett lose hand after hand in a stunning time-lapse sequence, or the degrading speeches to his students about how none of them are likely to ever achieve true success, this is a film knows how to get under your skin and frustrate you, because it is never easy to just sit back and watch a man destroy himself.  While this may not be my best picture of the year, this is easily one of the more impactful pictures I have seen this year.

Brent Lorentson is a horror writer and film critic based out of Tampa, Florida. With a BA in Digital Film, he co-wrote and co-directed Scavenger Hunt. His short stories have appeared in various horror anthologies. In 2019 his short script Fertile Blood will be a part of the anthology horror film Slumber Party. He is currently working on his first novel A Dark and Secret Place set to be released in late 2019. Favorite Films: Taxi Driver, Fight Club, I Saw the Devil, The Wild Bunch, Dawn of the Dead, A Clockwork Orange, Pulp Fiction, Heathers, The Monster Squad, and High Fidelity.
The Mentalist: Season 7 Avengers : Age of Ultron