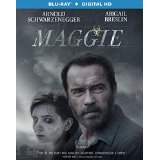 Maggie is a slow zombie movie. You might assume I’m describing where this film falls on the fast zombie vs. slow zombie spectrum. (For the record, the monsters in Maggie do move at a decidedly deliberate pace.) However, the deliberate pace also applies to the way first-time director Henry Hobson unfurls his story in this bleak zombie drama. Everybody in this film — including a playing-against-type Arnold Schwarzenegger — shuffles and lumbers their way through their lives, whether or not they’ve been infected with a lethal virus. In other words, this is pretty much the last thing you’d expect from a movie that has both Schwarzenegger and zombies…and that’s a big reason of why I dig it.

The action picks up a few months after the worldwide outbreak of the Necroambulist virus. I find this to be a curious and interesting time to check in on a global catastrophe. (Think 28 Weeks Later.) Most films either dramatize this sort outbreak as it’s happening and our heroes try to prevent it, or they are post-apocalyptic stories that don’t begin until well after the world has been laid to waste. As a result, Maggie can probably be best described as “mid-apocalyptic.”

The film opens with the voice of Maggie (Abigail Breslin), who is trapped in the city after curfew and urges her father Wade (Schwarzenegger) not to come looking for her. Wade eventually catches up with Maggie at the quarantine wing of a hospital. She has been bitten on the arm, and Wade is told the virus is eventually going to spread until “the Turn” takes effect. (Symptoms include an elevated sense of smell and an appetite for human flesh.) Wade is allowed to take Maggie home with the understanding that she’ll be placed back in quarantine once Maggie’s symptoms worsen. But Wade — having glimpsed the inhuman conditions for people in quarantine — detests the idea of having Maggie live out her final days away from home, which puts a strain on his relationship with second wife Caroline (Joely Richardson).

The story is simple enough and it’s told on an intensely personal level, despite the global implications of the virus. Hobson intentionally keeps his focus on Wade’s farm while the events of the outside world play out on the fringes of the screen. (We’re told farmers have been encouraged to burn their fields to stop the spread of the disease, which accounts for the periodic plumes of smoke in the distance and the barren landscape.) Although Wade breaks a zombie’s neck within the movie’s first 10 minutes, the movie resists having Schwarzenegger go on a quippy killing spree. (The on-screen body count here is less than a handful.)

I realize this is likely a disappointment for fans of zombie horror and for anyone who has ever seen a Schwarzenegger movie. In fact, some might bypass the word “disappointment” and call it a straight-up betrayal. After all, what’s the point of casting Schwarzenegger in a zombie movie if you’re not going to have him mow a bunch of them down? The action movie icon is also credited as a producer for Maggie, which means he likely played a significant role in shepherding the project to the screen. Despite the easy jokes about his lack of acting range, Schwarzenegger has always proven to be savvy about his own persona. On top of gamely (and successfully) using his hulking body and thick Austrian accent for comedies (Twins, Kindergarten Cop), he deflated his own action movie god image in Last Action Hero. (I remain convinced a big reason that very funny movie tanked is because people didn’t realize Arnold was sly enough to be in on the joke.)

Schwarzenegger is pushing 70 now. (He’s 67, to be exact.) So despite his best efforts, Arnold’s days as an action movie superstar are numbered. Wade is the most human character Schwarzenegger has ever played, which is fitting because the drama in Maggie stems from how much humanity is left in the title character as she slowly transforms into a monster. Being a mid-apocalyptic drama, the viewer is left to fill in some blanks in the story. (Why is Wade seemingly afforded special treatment by both the local sheriff and a kindly doctor?) The movie is most effective when it’s at its most ordinary. (When Wade tells Maggie to “stop picking” at her fatal bite wound in a fatherly tone, he could just as easily be talking about a pimple.) Two of the best sequences involve people chatting and hanging out: Wade and Maggie reminiscing about her late mom and Maggie enjoying a temporarily carefree outing with her friends…for what is probably the last time.

Of course, saying that this is the most “human” performance of Schwarzenegger’s career is another way of saying this is the most average person he’s ever played. And however many words you can use to describe Schwarzenegger, “average” is probably not one of them. So, again, why cast Arnie in this movie as opposed to a Dennis Quaid? Well just like his most famous role, Schwarzenegger doesn’t actually say a heck of a lot so much of the performance is in his chiseled face, which is covered by a raggedy beard for one of the few times in his career. (The beard here also serves to cover up some of the obvious cosmetic work the actor has undergone over the years; personally, I think a little gray looks good on him.) Schwarzenegger is understated but remains thoroughly effective; his hulking physique and imposing presence also help you accept the amount of leeway Wade gets in the film.

Breslin has her own zombie movie credentials, but this is a much different performance from her work in Zombieland. The former Little Miss Sunshine has grown into an effective, mature performer while maintaing that star-making spark. Maggie is as sullen as any self-respecting teenager, but she also lets us see her fear and her love for her family. Richardson is solid (despite a wonky American) accent, and a little underused as Maggie’s stepmom; Caroline is a good wife and mother who deeply cares for Maggie, but is still made to feel like an outsider because of Maggie’s intense bond with Wade.

It’s no spoiler to say there’s no miracle, 11th hour cure for the Necroambulist virus, so the ending is a downer. Then again, so are the beginning and middle of the film. If you’re looking for head-bashing zombie thrills…well there’s a new Walking Dead spinoff premiering soon followed by the original flavor. Maggie offers a smaller-scale, more openly emotional take on losing a loved one and trying to hang on to your humanity. I like brain-splattering action as much as the next guy, but I’m also excited to have this thoughtful alternative from a most unexpected source.

Maggie is presented in an aspect ratio of 2.40:1. The 1080p image is arrived at with an AVC MPEG-4 codec at an average of 36 mbps. The palette here is as drained of color as Maggie’s face eventually becomes. The muted presentation serves the somber story well. Razor-sharp detail is largely sacrificed in favor of a grayish digital sheen (and some digital grain) that seems off-putting at first. However, the vaguely smoky atmosphere also evokes a world that is often on fire. The overall result is quite effective, even if black levels aren’t very inky. The most striking pop of color comes from a literal blood bath. Overall, this is an impressive visual presentation that manages to make gloominess look striking.

The DTS-HD Master Audio 5.1 track is a tad aggressive, especially for a film set in a sparsely populated planet. The director wisely kept ambient chatter and animal/zombie noises off the rear speakers, and the track is at its best when it grants David Wingo’s heavy, mournful score enough space to play. However, there are instances where it seems like the filmmakers became a little insecure about their sound mixing; there are constant thunder claps, which bring the subs to life and hint at a storm that never actually comes. The subs also lightly purr whenever Wade jumps into his beat-up old truck. Fidelity is good and the dialogue is clear throughout.

Director’s Commentary: Director Henry Hobson, like his movie, resists the urge to fill in silent passages with mindless chatter. But when Hobson speaks, he reveals interesting information about the production and some of the dramatic choices he made. That includes intentionally leaving the “zombie stuff” in the background and scrapping an extended opening sequence, which accounts for the confusion in the movie’s opening minutes. (Did Maggie run away from home at the start of the film? Why was she in the city by herself?)

Making Maggie: (18:14) An above average featurette featuring comments from cast and crew. Hobson talks about his desire to make a zombie drama (as opposed to the umpteenth zombie horror/action movie) and Schwarzenegger’s peers heap praise on him for playing against type.

Interviews with Cast & Crew: Features input from Hobson (8:16), writer John Scott 3 (6:34), along with actors Schwarzenegger (19:48), Breslin (7:19) and Richardson (8:10). There is no Play All option. Some of the material here can be seen in the aforementioned featurette, but there are interesting insights to be found here, like Scott 3 writing this movie from a very personal place and Schwarzenegger calling this the most human story he’s ever done.

Deleted Scene: (2:15) Yes, that’s “scene” as in singular, and it’s an intimate moment between Wade and Caroline. Fleshes out the strain that Maggie’s condition has put on their marriage.

It’s interesting to me that this movie is making its Blu-ray debut at the same time Arnold has reprised his most famous role on the big screen. The reason Arnold Schwarzenegger became a star — as opposed to O.J. Simpson — is because he was able to infuse the deadly machine with personality. (And, in the classic sequel, humanity.) So I find it fascinating that Schwarzenegger’s most daring project in years is out at the same time that he’s thrown the Terminator safety blanket over himself. (Which wasn’t even that safe, it turns out.)

As much fun as it is to watch Arnold “play the hits” for fans, I’m much more excited by the prospect of him taking on more roles like the one in Maggie than I am about seeing him potentially appear in Terminator 6 and 7. It’s certainly not a zombie film for everyone, but it’s an “Arnold” film that was way overdue.