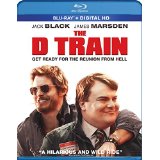 The D Train was not what I expected…and thank goodness for that. The film boasts that it’s from the “comedic geniuses who brought you Nacho Libre and Wayne’s World,” although the only thing those two movies have in common is that they’re both comedies with, um, people in them. Meanwhile, the glossy poster makes it look like an inspirational drama, which doesn’t exactly mesh with the phallic-sounding title. In other words, there’s nothing about The D Train that hints at the intriguing dramedy lurking underneath.

Dan Landsman (Jack Black) is the unpopular self-appointed chairman of his high school’s alumni association. The group is struggling to lure former students to their upcoming reunion when Dan spots former cool kid Oliver Lawless (James Marsden) on TV in a Banana Boat sunscreen ad. (Given the comically inflated significance of the commercial, I assume/hope The D Train producers were handsomely compensated by Banana Boat.) The commercial is a light bulb moment for Dan: if he can get a “hot-shot” actor like Oliver to attend the reunion, more people will follow and Dan will be a hero to the committee colleagues who mock and shun him.

So far, so Get Him to the Greek. Dan concocts a phony business deal in California to fool his technophobic boss (Jeffrey Tambor) into letting him fly out to the West Coast. The excitement of hanging out with Oliver is so great that Dan barely notices he’s a two-bit actor with a drug dependency. Nevertheless, the duo connects on a surprising level and Oliver agrees to attend the reunion. However, things are off from the moment Oliver returns to his hometown. Oliver’s ease with Dan’s wife (Kathryn Hahn), teenage son (Russell Posner), and friends intensifies Dan’s insecurities, which leads to a major blow-up at the reunion.

You’ll have to excuse me for being a little vague in my description. Even though there’s no Sixth Sense-style twist to protect, The D Train does explore emotional territory that I wasn’t expecting based on the promotional materials and the film’s first act. There are sex and drugs (but no rock and roll) here, and they might clash with the more dramatic ideas at first glance. But rather than being gratuitous throwaways, the movie surprisingly portrays the psychological damage sex, in particular, can cause. Call it “meaningful raunch.”

To be fair, co-writers/directors Andrew Mogel and Jarrad Paul do throw a lot of ideas against the wall in their feature film debut. I just personally thought they managed to make a good deal of them stick. The strongest of those is the idea that “peaking in high school” — which is typically used to describe an adult loser who lives in the past — might still be preferable to not peaking at all. (Better to be a Has Been than a Never Was.)

For a while, the filmmakers seem to have created a demented world in which Dan’s scheme to lure Oliver and save the reunion is actually a reasonable idea. (This also a world in which Dermot Mulroney, amusingly cameo-ing as himself, is an idol to Dan and Oliver, who are played by actors considerably more famous than Mulroney.) Dan seems completely delusional for believing that Oliver is a superstar. Yet the movie eventually bumps up against the notion that, to a guy like Dan who married his college sweetheart and never left his hometown, the down-on-his luck actor who left town and (kinda) made it as a Hollywood actor *is* something of a superstar. Then again, there’s also a grass-is-greener debate to be had whether Oliver’s lifestyle is really any more desirable than Dan’s. (Who has a caring wife and two children.)

Of course, when Jack Black is your star, you’re never too far from veering back into the demented zone. I didn’t like Black or Dan as much when both the actor and the filmmakers seemed to have contempt for their aggressive loser of a main character. I softened as The D Train gradually revealed that Dan’s quiet desperation and overeagerness are likely rooted in his horrible high school experience. (Rather than resorting to flashbacks, the movie conveys this through Dan’s hands-off interactions with his own sexually-confused, high school-age son.) At first, Marsden seems to be playing a self-absorbed, pouty-lipped caricature of a young-ish actor. (Basically, playing James Franco.) However, his performance lets us see the shine and spark that Dan’s hero worship ignites in Oliver. It’s a sneakily tricky role — Oliver’s jerkiness and selfishness has to be pitched just right — but Marsden pulls it off with aplomb.

Even though this is mostly a two-hander, the strong supporting cast gets plenty of comedic space to shine. Tambor is particularly hilarious with his deadpan aversion to cell phones and computers, and there’s a funny recurring joke with Hahn’s character being repeatedly woken up by Dan for trivial reasons. Each of those two performers also get dramatic moments to shine as Tambor’s character points out the ridiculousness of Dan’s scheme, and Hahn gets to play out a jarring betrayal with Black.

The D Train doesn’t always stay on track, but I don’t mind a few detours…especially when they lead to interesting places I didn’t expect to visit.

The D Train is presented in an aspect ratio of 2.40:1. The 1080p image is arrived at with an AVC MPEG-4 codec at an average of 39 mbps. There’s finer detail than I expected here, starting with the opening close-up of a roll of lockers in an empty high school hallway. The movie also displays some versatility in its visual palette, beginning with the overcast Pittsburgh suburbs before exploding to life with the sunny Banana Boat commercial. Black levels are solid if unspectacular, and they get their most notable workout during the Dan and Oliver’s all-night benders in dark Hollywood bars. There is no aliasing or banding in this blemish-free image that is overall a cut above most low-budget dramedies.

The DTS-HD Master Audio 5.1 track is heavy on dialogue, which is largely confined to the front speakers. The rest of the speakers come to life during scenes at various crowded Hollywood bars and (of course) during the reunion. Even the subs momentarily spring to life during the synth-ier cuts in Andrew Dost’s score. Besides a whooshing jet engine noise that flies from one channel to the next, this isn’t the most dynamic track in the world, which is fine for this particular material.

Gag Reel: (3:38) Your basic flubbed lines and curses, with an extra side dish of Jack Black mugging.

Deleted Scenes: (7:05) There are eight total scenes. A few of them are extensions of existing material, including longer montages of Black acting playing up the more manic persona we’re used to seeing (and was smartly trimmed from the final cut). Features a Play All option.

Again, The D Train was not at all what I expected. I’m sure a decent number of people — especially those expecting a side-splitting comedy — will find this movie frustrating and disappointing. I personally found it to be a refreshing change of pace, even if the changes in tone can feel a little jarring.

Then again, the film does a strong job of conveying the ways in which Dan and the rest of the characters are jarred alongside the audience. Even though I realize The D Train‘s quirky sensibility isn’t for everyone, I’d still recommend you hop aboard.