Posted in: Disc Reviews by Gino Sassani on October 28th, 2015 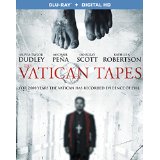 “Dark forces are rising. The frequency of possession is increasing all over the world.”

Must be Global Warming…check that ,Climate Change. It seems the whole warming thing wasn’t exactly working out for these guys. So like a business with a bad reputation you change the name and pretend that’s what it’s been like all along. There is an alarming increase in the frequency of movie possessions all over the world. But it’s not Global Warming or Climate Change that’s to blame. Hell, it isn’t even Bush’s fault. It’s got to do with the color green. Devil possession has been a popular horror sub-genre since The Exorcist took the world by storm in 1973. Filmmakers are chasing that success, and filmgoers are hoping to see something that special again. It’s not going to happen. No film has ever come within miles of hitting us like The Exorcist did over 40 years ago. We all keep chasing that elusive high, but we’ll never see its likes again. Now, that doesn’t mean we can’t have a little fun while we’re looking.

“For 2000 years, The Vatican has investigated occurrences of unexplained evil. Since the early 1900’s these cases have been captured on film and video and the evidence catalogued.”

That’s where The Vatican Tapes comes in. Look at it as an X-Files unit within the Catholic church. The film begins with a series of news items and quotes from some high-level Vatican people. They include Vicar Imani (Hounsou) and Cardinal Bruun (Andersson). They run a secret unit within the church that keeps this collection of video evidence chronicling evil throughout the world. Now they’ve come upon a case they believe requires the direct intervention of Bruun. We’re not just talking about another run of the mill Devil possession here. This is the big one…the Antichrist. It’s going to require the big guns.

“I warn you that what you are about to see and here is very disturbing indeed.”

Enter Angela (Dudley). She appears to be a normal young woman living with her boyfriend Pete (Amedori) and trying to get her military father, Roger (Scott) to accept the guy. So they’re celebrating her birthday together. A knife cut while serving up some cake sends Angela to the ER for some stitches and a strong antibiotic. Infection sets in, but Angela’s personality is changing as well. Before long she’s in a coma for 40 days. Just as they’re about to pull her plug she revives, but Angela has really changed. An incident with a baby in the nursery has the hospital send her to a mental hospital where she appears to have incited a riot. They want her gone, too. Their last hope is young Father Lozano (Pena) who has been keeping an unnaturally close eye on Angela from the day of the cut. It’s time to beat the Devil out of poor Angela. No, I’m not talking domestic abuse here. I’m talking exorcism. It’s Father Lozano and Cardinal Bruun against the demon. Let’s just say that doesn’t work out well. Not sure how they’re going to explain the results to their homeowner’s insurance company. Mine didn’t like the “lightning hit my pipes” story. They’re going to love this one.

As the film starts it turns into an above-average possession film. We get a chance to get to know a few characters and relationships so that when things begin to deteriorate we have some sense of feeling not only for Angela but for her family. The film manages to bring on some creepy moments both in the hospital and mental institution. They play out the riot a bit too long, and it’s merely gratuitous after a few short minutes. I was surprised to learn this was their cut-down, restrained version.

The real performance here is the work of Michael Pena. I’ve really come to love this guy. From Fury to The Martian to Ant Man (Baskin-Robbins don’t play) to this film, he is the kind of actor who doesn’t know how to disappoint on screen. Here he has a far more laid back character, and Pena has to use more nuance to bring Father Lozano to life. The film is worth a watch just for his performance.

The film was originally written as a found-footage affair. Thankfully some powers that be saw there was more to this than that. Some of that feel remains. Part of the story is indeed shown through various security-type cameras. It fits the narrative and gives us moments very much out of the Paranormal series. We get those time-lapse segments watching a disturbed sleep in very much the style of Paranormal. It isn’t overused and serves as just one storytelling method. I ended up appreciating the various shooting styles with no headache.

The problems start to mount at the end of the film. The exorcism is a bit of a joke and one of the worst versions of that element I’ve seen to date. There doesn’t seem to be a structure or a plan. There are hints of the Cardinal’s past with this demon, but it’s over and done with one sentence. There could have been so much more foreshadowing and drama here. The exorcism itself is a throwaway scene with terrible computer-generated fire and destruction scenes. Like many films of this nature, it all gets too carried away with itself and ignores the nice foundation work that the film so carefully builds. This film starts out strong and suddenly jumps tracks…or maybe that was a shark… only to discard everything that made it special. The film goes from a strong collection keeper to a Red Box special in the course of the final act.

The Vatican Tapes is presented in its original aspect ratio of 1.78:1. The 1080p image is arrived at with an AVC MPEG-4 codec at an average 35 mbps. There are a lot of different kinds of footage here. The high-definition image presentation does a solid job of providing as realistic view as possible. Even the non-cam footage looks very much like a clean modern documentary. Of course, the image suffers when we’re viewing through an inferior source. The sharpness actually works against the film in the climax. The f/x do not appear to have near the same resolution as the rest of the material. Fake fire and blood look pretty bad at times. Black levels are deep with plenty of shadow definition that diminishes expectantly inside the surveillance material.

The DTS-HD Master Audio 5.1 is typical with this kind of film. There are some sudden uses of sub bass bumps intended to give you a jump in your seat. The surrounds are used to add that creepy whisper or scratching sound that immerses you into the horror atmosphere. Dialog is fine, and the score never intrudes upon the film’s necessary moments.

Talk Of The Tapes: (29:20) This is a clip-heavy making-of feature. Cast and crew talk a lot about the film’s religious images and symbols. They are almost apologetic to the Catholic Church at times. There some pretty good behind-the-scenes footage. A lot of time is spent describing the characters.

Deleted/Extended Scenes: There’s over a half hour of extra footage.

The film had a limited release. It spent a month in a little under 500 screens. It wasn’t much of a hit and ended up more or less really a direct-to-video release. I think there’s enough here to entertain the horror fans, particularly the possession sub-genre followers. There is such a good film forming here that I am a bit angry that they let it fall apart so badly in the end. It’s almost as though one team filmed the first 2/3 and another crew took over the last. There’s an obvious franchise potential here. It’s a pretty good idea, these modern Vatican X-File hunters, and it could lead to ideas beyond merely possession. Now I’m not sure it will get that chance. Have you ever seen a football runner make a wild long dash to the end zone, weaving skillfully around tacklers, only to drop the ball just as he’s about to score? You can appreciate the heck out of the run but leave disappointed. There’s room for a sequel here. But if it’s the same people who are responsible for the end of this film…”That’s the day we most fear.”

Gino Sassani is a member of the Southeastern Film Critic's Association (SEFCA). He is a film and television critic based in Tampa, Florida. He's also the Senior Editor here at Upcomingdiscs. Gino started reviewing films in the early 1990's as a segment of his local television show Focus. He's an award-winning recording artist for Omega Records. Gino is currently working on his 8th album Merchants & Mercenaries. Gino took over Upcomingdiscs Dec 1, 2008. He works out of a home theater he calls The Reel World. Favorite films: The Godfather, The Godfather Part II, The Body Snatcher (Val Lewton film with Karloff and Lugosi, not the pod people film), Unforgiven, Gladiator, The Lion King, Jaws, Son Of Frankenstein, The Good, The Bad And The Ugly, and Monsters, Inc.
Tuesday Round Up: October 27, 2015 The Benoit Jacquot Collection (Blu-ray)