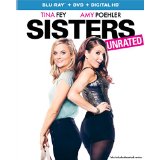 Between their stints on Saturday Night Live and their subsequent sitcom hits, Tina Fey and Amy Poehler are two of the most successful comedic voices of the new millennium. (I happen to think Fey’s 30 Rock and Poehler’s Parks and Recreation are both among the five best comedies to debut in the last 10 years.) The longtime friends — dating back to their Chicago improv days in the early ‘90s — have also proven to be funny together, most notably during their well-received gigs hosting the Golden Globes. I’m telling you all of that to tell you this…I can’t believe how bad their new movie is.

Poehler is Maura Ellis, the goody two-shoes daughter of Bucky and Deana (James Brolin, Dianne Wiest). Fey is Kate Ellis, Maura’s older sister and the family’s bawdy black sheep who has just been kicked out of her apartment. Bucky and Deana have sold the girls’ beloved family home — dubbed “Ellis Island” — and they need their daughters to come down to Orlando to pack up their rooms. (They force Maura to tell Kate the news, since the latter doesn’t take bad news well.) Before having turn the house over to the snobbish new owners, the Ellis sisters decide to have one final mega-bash in their childhood home.

The party starts at about the movie’s 45-minute mark and it comprises most of the rest of the film’s 123-minute running time. (That’s for the Unrated Editon; the R-rated theatrical cut is 118 minutes.) Even though the Ellis Island bash is attended by a steady stream of funny people (Rachel Dratch, Samantha Bee, Jon Glaser, Kate McKinnon, to name a few), they’re largely relegated to banging out a singular unfunny note. (To be fair, some of the supporting characters are occasionally amusing; I appreciated Bobby Moynihan’s all-out commitment to obnoxiousness.)

But even before the police show up at Ellis Island (twice) because of noise complaints, Sisters is a shrill, aggressively unfunny experience. Writer Paula Pell (SNL, 30 Rock) based the story on her relationship with her own sister, but the movie required a firmer hand than the one director Jason Moore (Pitch Perfect) was willing to apply. The movie’s simplistic story is shakily propped up by oodles of improv that results in scenes dragging on way too long. (Maura incorrectly pronouncing the Korean name “Hae-Won” appears to be much funnier to Poehler and company than it is to anyone else.) Even the movie’s bawdiness and F-bombs feel forced, at least when compared to the similarly indulgent and formless comedies Paul Feig has made with Melissa McCarthy (Bridesmaids, The Heat, Spy).

You don’t have to strain too hard to see some of the issues a better movie might examine more deeply. Those themes include the difficulty of letting go of your childhood for good, the irresistible pull of reliving your glory days, and a few others. Unfortunately, these promising story beats are drowned out by surprisingly square comedy — a creaky “Old people are bad at Skyping” joke gets a nice little twist, but a group of lesbians playing some surprising tunes at the party is a genuine groaner — and superfluous storylines. (Maura is more of a mother to Kate’s daughter than Kate is; this under-baked storyline only pops up often enough to justify the sisters’ catfight in the mud toward the end of the film.)

Fey and Poehler previously teamed up for 2008’s Baby Mama. That movie wasn’t anything to write home about either, but it hewed closer to the actress’s comedic strengths. I applaud Fey (usually the “straight man”) and Poehler (who excels at playing broad characters) for playing against type. But Fey mostly feels like she’s trying too hard to be outrageous, while Poehler feels a bit wasted here.

Among the few people who get out of this thing unscathed are John Leguizamo (embracing the sleaze as Kate’s high school ex), Maya Rudolph (as haughty nemesis Brinda; reminding everyone once again that she deserves more work), WWE star John Cena (showing off some nice deadpan as an intimidating drug dealer), and Ike Barinholtz (displaying some relaxed, pleasing leading man chops as James, a love interest for Maura).

Then again, Sisters is the kind of movie that thinks shoving a foreign object up James’ rectum is a worthwhile way for all of us to spend a few minutes. I don’t know about you, but that’s a party I’d rather not attend.

Sisters is presented in an aspect ratio of 2.40:1. The 1080p image is arrived at with an AVC MPEG-4 codec at an average of 27 mbps. The film is largely set in Orlando, so we get a bright image with pleasingly warm tones early on. Even though the movie’s centerpiece party takes place at night, we get some pops of color thanks to some questionable (and garish) wardrobe choices. Black levels when the characters venture outside are solidly deep and offer good separation. Overall, this is a strong, blemish-free HD presentation from Universal.

The DTS-HD Master Audio 5.1 track is as dialogue-driven as you’d expect from a comedy. The rear speakers briefly pipe up for a PA announcement while Kate is traveling. Otherwise, the surround sound field only gets a workout when the Ellis sisters and their guests rock out to a new track at their party. (That includes everything from Snow’s “Informer” to Daft Punk’s “Doin’ it Right.”) The latter tracks — courtesy of an unexpectedly hip DJ — represent the rare times the subs make an appearance.

How to Throw a Party: (1:36) Party-planning advice from the Lesbians, which gives actresses Kate McKinnon and Colleen Werthmann a chance to riff. Not sure these very minor characters were worth their own special feature.

Grown Up Parties Suck: (5:18) Improvisational outtakes from the section of the film right before Kate and Maura’s party takes off. Features performers like Bobby Moynihan, Brian d’Arcy James, Samantha Bee, John Lutz and others at their deadpan best.

The Alex Chronicles: (2:51) Speaking of Moynihan, his (intentionally) annoying character gets the spotlight here. (We see him become increasingly manic, just like he does in the movie.)

The Kate and Pazuzu Chronicles: (2:05) Fey riffs next to a wonderfully deadpan Cena. The WWE superstar holds his own extremely well.

A Teen Movie…For Adults: (10:26) The closest thing to a conventional “Making of” on this disc. We get cast and crew comments, along with a look at the construction of the massive “Ellis Island” set.

The Original Sister: (6:40) Writer Paula Pell based the film on her relationship with her own sister. (She was the “Maura.”) Various cast members take turns reading painful excerpts from Pell’s diary.

Deleted Scenes: (18:03) There are nine chapters, and some of them (Kate collecting a cover charge from her party guests) are recurring gags with multiple beats. We also see the hoity-toity Geernts (Santino Fontana, Britt Lower) get their comeuppance.

Extended Scenes: (16:54) There are also nine (equally inessential) chapters here, including longer versions of the Ellis sisters running into Brinda at the store and bonus footage of Greta Lee’s Hae-Won.

Gag Reel (3:17) There are some green screen shenanigans along with Fey reverting into a Christopher Walken impersonation. Otherwise, we get the typical sort of flubs.

The Improvorama: (8:40) Fey and Poehler try out a bunch alternate punchlines throughout the film. (Sample: Fey repeatedly fills in the blank when Kate says, “Shake my hand and smile right now, or ______“)  Other cast members (like Cena, Lee, and John Leguizamo) get in on the act during Kate and Maura’s catfight.

Feature commentary with Tina Fey, Amy Poehler, director Jason Moore, and writer Paula Pell: A predictably chummy and goofy conversation that features some production details (Long Island subbed in for Orlando) and a lot of chop busting. I was surprised by how much of the story — even the ultra-handsy way Kate and Maura first greet each other — was taken from Pell’s life.

Fey and Poehler simply haven’t been able to transplant their small-screen comedic mojo to the movies. Even people who aren’t particularly big fans of either performer will likely concede that they can do better than the dumb, disappointing Sisters.

Do not RSVP to this party.