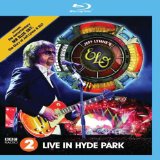 In the late 1960’s three musicians came together with an idea. It was a somewhat unconventional idea. Roy Wood and Bev Bevan were part of the band The Move when they met up with Jeff Lynne from The Idle Race. The three hit it off almost instantly. So much so that before long Lynne would also become a member of The Move so that he could work with Wood and Bevan. But that wasn’t going to be the ultimate goal. The unconventional idea that the three had involved combining rock and roll with classical music. Of course, other bands had done orchestral arrangements, most notably the Beatles. But their idea was to fuse the concepts more integrally together. The idea was to have live violins and cellos as part of the actual band itself. Lynne would once describe the concept as picking up where the Beatles had left off. Together they invented a new way to rock “n” roll. That invention was the Electric Light Orchestra, or ELO to the fans.

The band started with a bang. The first album, while not a huge commercial success, received more than its share of attention. But band squabbles would almost doom this ambitious project before it got off the ground. Roy Wood left the band to form his own and took some members with him. It looked bleak for the struggling concept. But that might have been the best thing that could have happened. Jeff Lynne would become the controlling force, and the band would go on to enjoy commercial success to go along with those critical appreciations. The band’s second album was called No Answer, but it wasn’t really intended to carry the title. A secretary with the record company was assigned to contact Jeff Lynne to get the correct album title. He wasn’t home. Naturally, the secretary made the notation “no answer”. The notation was misinterpreted as the album title, and the mistake would be a permanent entry in the band’s discology.

When Out Of The Blue hit in early 1977, the band soared right to the top. With this new success, the band found its identity. The flying saucer on the cover would become a trademark for the band. The concerts which this then-17-year-old attended came complete with extraordinary lasers and a saucer that lifted and opened to reveal the stage. It wasn’t until years later that the scandal broke that much of the music we heard on the Out Of The Blue tour had been pre-recorded. The final years of the band saw releases without much of the actual orchestra still intact. Most of the strings fell to keyboardist Richard Tandy and his keys. When the band appeared to have disappeared forever, Bev Bevan attempted to resurrect the band with the debuted of his new version he called The Electric Light Orchestra Part II. The band released two studio albums with vocalist Eric Troyer sounding suspiciously like Jeff Lynne. Lynne sued the group over the use of the ELO name. A compromise was reached that gave Lynne a percentage of the band’s money and allowed the band to keep the name and use the library of mostly Lynne-composed songs at their concerts. That effort didn’t last long. Lynne eventually followed up the demise of ELO Part II with a new studio CD that was pretty much a solo release. Since that time Lynne has become a much-sought-after producer. He’s resurrected carriers of the likes of George Harrison and Roy Orbison. Even Helen Reddy and Brian Wilson got the Lynne treatment. He produced music for Tom Petty and Randy Newman. Together with Harrison, Orbison, Petty, and Bob Dylan the band created two albums as the farcical Traveling Wilburys.

Jeff Lynne took a bit of a hiatus from it all for more than a decade. There were recorded tracks that sat in the cans, and he disappeared from the musical landscape for a while. That all changed in September of 2014. ELO was chosen to headline the BBC Radio Festival In A Day event. Lynne assembled an impressive band, but of course there wasn’t so much ELO to be found. Only Richard Tandy from the original lineups joined Lynne on the Hyde Park stage. Lynne’s bad feelings with the rest of the guys appears to be intact. Still the band was a pretty solid gathering of talented musicians. Instead of having a pair of cello players in the front, this band was accompanied by the BBC Concert orchestra, and they provided the fullest ELO sound you’ve ever heard.

Lynne was in top form. His voice hasn’t appeared to have suffered over the years. Yeah, there are a few high things he can’t reach any more, and he adjusted nicely by dropping the octave to make the song fluid. He even forgot a few lines, and you can see him struggle to check out the teleprompter that was placed at his feet near his monitor. Whatever the band lineup, this was golden ELO, and the only flaw that I could see was there just wasn’t enough of it. But then again, can there ever be enough ELO?

The same can be said for the gathering crowd. The audience appears to span miles around the stage. Anyone who thought ELO’s days were behind them should take note of the throngs that gathered to see this concert.

All Over The World

Can’t Get It Out Of My Head

Don’t Bring Me Down

ELO Live In Hyde Park is presented in its original aspect ratio of 1.78:1. The 1080i image is arrived at with an AVC MPEG-4 codec at an average 25 mbps. I like that this film was made using actual 35mm film. The hig-definition image presentation is certainly sharp. When the camera pulls close to the performers you’ll see sweat stains on their clothes. The backdrop is a giant video screen, and those images blend so perfectly with the stage that you’ll swear some elements like rain are actually there. Black levels are wonderful and combine with absolute perfect contrast to accent the tight laser lights and other lighting effects. None of the detail is lost in either the brightest or darkest of lighting conditions.

The LPCM 2.0 is exactly what Lynne wanted it to be. Instead of a surround experience, he was intent on reproducing these songs in the kind of environment in which they were born and thrived. It’s a fine choice, and you won’t miss the larger mix. It sounds incredibly full and dynamic just the way it is. The subs pick up much of the bass and those essential cello undertones. The lyrics are completely clear, and the overall mix is the perfection that Lynne is so famous for.

Mr. Blue Sky: (1:20:03) This is more a tribute than documentary. Lynne participates throughout, even offering acoustic performances of songs with Richard Tandy from his home. We get a peek at his recording process as he’s attempting to re-record many of the ELO classics. Fellow musicians Tom Petty, Paul McCartney and Ringo Starr offer their thoughts on the man and his music. There’s some nice vintage recording studio footage and some nice stories along the way.

As you might have guessed, I’m a huge fan of ELO. As a songwriter myself, I count Jeff Lynne as one of my most important influences. Like Lynne, I love to write and work with cello in my music. It’s quite a compelling combination. I first heard the band back in the mid 1970’s. I saw them live in 1978. Ever since that moment, it seems that “I can’t get it out of my head”.

Gino Sassani is a member of the Southeastern Film Critic's Association (SEFCA). He is a film and television critic based in Tampa, Florida. He's also the Senior Editor here at Upcomingdiscs. Gino started reviewing films in the early 1990's as a segment of his local television show Focus. He's an award-winning recording artist for Omega Records. Gino is currently working on his 8th album Merchants & Mercenaries. Gino took over Upcomingdiscs Dec 1, 2008. He works out of a home theater he calls The Reel World. Favorite films: The Godfather, The Godfather Part II, The Body Snatcher (Val Lewton film with Karloff and Lugosi, not the pod people film), Unforgiven, Gladiator, The Lion King, Jaws, Son Of Frankenstein, The Good, The Bad And The Ugly, and Monsters, Inc.
The Jungle Book (2016) Contest: Win Tangerine On Blu-ray From Magnolia Home Entertainment