Posted in: Disc Reviews by Brent Lorentson on June 15th, 2016 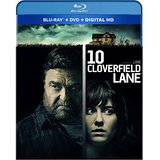 The simplicity of the film is what works so well.  It’s a scenario that can be believed by any member of the audience, and how stubborn our minds can be.  When watching the film you can understand how this was a film that managed to sneak under the radar.  While first time director Dan Trachtenberg deserves a nod of praise for his execution of this film; the real heroes are Damien Chazelle and the two writers, Josh Campbell and Matthew Stuecken, who created the project.  Having seen Chazelle’s work on Whiplash and Grand Piano, I can’t help but feel it was his influence that gives this film the old school Hitchcockian feel.  This is a brilliantly-crafted script that will put this film on the map for film geeks for years to come.

10 Cloverfield Lane is presented in a 2.39:1 aspect ratio. The 1080p image is arrived at with an AVC MPEG-4 codec at an average of 27 mbps. This is a very intimate film, and with a good portion of it taking place in the shelter, there are not too many moments for the high definition to really be effective.  There is plenty of detail captured, but it’s not till the final act of the film where we really get to appreciate the image quality.  With the characters all under what seems to be fluorescent light, there are moments where the hues seem a little off, but it’s nothing that is too distracting.  I didn’t see any digital artifacts or any compression issues.  In the end, most of the film that takes place in the shelter, though technically is shot well, is nothing I would call very visually appealing.  It’s everything beyond, from some wide landscape shots to some special effects that make up for the claustrophobic environment for most of the film.

The 5.1 Dolby Digital TrueHD is where the film shines, and come award season don’t be surprised if this film gets some technical nominations.  The dialog is clear throughout the film, but what is so well executed is the sound design for what we don’t see on camera.  The “helicopters” overhead and the possible cars moving over the shelter are very effective, and by the use of speakers we have the sounds coming from all directions giving us the isolated feeling as the characters would have.  Then factor in the brilliant score by Bear McCreary that immerses us into the action on the screen as Bernard Herman was able to do when he worked with Hitchcock.  This is basically as good as it gets for sound.

Audio Commentary with Director Dan Trachtenberg and Producer J.J. Abrams:  This is Trachtenberg’s first commentary, and, well, at times it gets a little awkward as Abrams tries to navigate him through the beats while discussing the film.  Though there are plenty of interesting bits on the making of the film, but it’s a bit much how we hear how great everyone is and the numerous times it seems Trachtenberg seems to have taken notes from Abrams concerning decisions made on the film.

Though there are several mini-features here, I simply elected to hit the play-all button, which seemed to keep a better flow going for the features.  All together the runtime for all the segments is (34:42).

Cloverfield Too: Members of the cast and crew discuss the story of the film and what drew them to the project.

Bunker Mentality: A feature about what went into the design and construction of the shelter.

Duck and Cover: A quick feature about the design of the suit that is made in the later portion of the film to survive outside the shelter.

Spin-Off:  Goes into the practical effects in the film, mostly involving the effects with the incidents where vehicles are wrecked.

Kelvin Optical: This is a feature that gave a little more depth to what happens during the making of the film as it goes into post-production.  We get to see some of the editing process as well as the use of digital effects as they are laid into the film.

Fine Tuned: Here is my favorite portion of the film where we get to see how the score was performed and how sound elements were created for the film.

End of Story: Basically an overview of the film and its production and how it ties into the first Cloverfield film.

As we approach the mid-point of the year, 10 Cloverfield Lane remains as one of the best films I’ve seen this year.  John Goodman is simply phenomenal in this film and remains as my pick for best supporting actor of the year; if he doesn’t at least get a nomination, that will be a travesty.  This is one of those thrillers that with multiple viewings continues to hold up and could possibly reach modern-classic status in time.  Don’t let anyone give away the film, go into this with as little information as possible and let this film unfold for you.  This is the perfect film to curl up with when you’re planning a date night at home or simply want to watch something that is more than over-budget special effects film.  This is a thriller that shows how good a film can be when the right talent finally comes together with a good story.

Brent Lorentson is a horror writer and film critic based out of Tampa, Florida. With a BA in Digital Film, he co-wrote and co-directed Scavenger Hunt. His short stories have appeared in various horror anthologies. In 2019 his short script Fertile Blood will be a part of the anthology horror film Slumber Party. He is currently working on his first novel A Dark and Secret Place set to be released in late 2019. Favorite Films: Taxi Driver, Fight Club, I Saw the Devil, The Wild Bunch, Dawn of the Dead, A Clockwork Orange, Pulp Fiction, Heathers, The Monster Squad, and High Fidelity.
Tuesday Round Up: June 14, 2016 A War (Blu-ray)