Posted in: Disc Reviews by Gino Sassani on July 7th, 2016 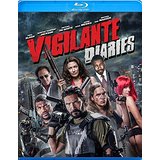 “That’s me, Mike Hanover, and I just killed a man in a taco shop bathroom. Hey, he started it. I been hiding near the border looking for The Vigilante…”

You’ve found him. Anchor Bay’s The Vigilante actually started life as a web series. The web episodes followed the exploits of The Vigilante, played by Paul Sloan and his sidekick The Kid, played by Kevin L. Walker. It was pretty much a hyper-superhero kind of series with ramped-up action on a limited budget. Now we have a feature film version that is quite the mixture of genre films. You get a little grindhouse mixed with some Leone Spaghetti Western with extra sauce. Throw in The Expendables with a side of Deadpool. Stir in some graphic novel clichés and season it all with a bit of exploitation film violence and characterizations. The result is a film that doesn’t take itself very seriously and might be good for an entertaining ride. That is, if you don’t overcook the whole thing. At about 108 minutes, let’s just say it was bordering on overcooked.

The film overcomplicates its plot. See if you can follow this paint-by-numbers version. The Vigilante (Sloan) once worked as an international mercenary for Moreau (Madsen). Once betrayed, he decides to hang up his special ops gig and become a bit of a superhero. With his sidekick The Kid (Walker), he travels the globe taking out thugs and criminals. He becomes an internet sensation when Michael Hanover (Mewes) catches his work on camera while filming a documentary. Hanover sees himself as part of the team and goes a little too public. But now The Vigilante is missing. He’s been captured by Armenian mob godfather Andreas (Nshanian), who wants revenge because The Vigilante killed his brothers. Now The Vigilante is being tortured by the deadly but hot Raven, played by Chasty Ballesteros. Hanover, with the help of The Vigilante’s pregnant wife, Jade (Lord) sent their own private army to the rescue. Unfortunately, as The Vigilante gets rescued, Hanover gets captured for his own session with Raven. Once Hanover is rescued, Jade is taken. Are you sensing a pattern here? All while Moreau is sending his own hit squad after our hero, because he’s ticked off the guys who pay the bills. That squad is led by Barrington, played by Michael Jai White. This game of musical captives and over-the-top henchman is only an excuse for comedic levels of carnage and bad acting.

I never saw the web series, but this film obviously has more money to spend than would have been used on an internet show. There are actually a few nice locations and set pieces. The film appears to have traveled a bit with its cast and crew. It’s also obvious that they all had a good time making the film. Most of the actors are hamming it up big time. That goes double for Kevin Smith’s go-to actor Jason Mewes, who eats scenery like you’ve never seen before. Madsen is no slouch in the ham department.

There’s a lot of cheese here, and that’s fine. Unfortunately, the film often falls into complete chaos with little inner logic. One scene features an ambush in a parking garage with full-out automatic weapons while one guy has a pistol with a silencer. The rest of the guys are making more noise than a 14-year-old at a Justin Bieber concert. The cast is filled with 90’s action heroes and martial arts personalities. It all could have used a little direction. Instead it goes on for far too long without actually getting anywhere. Even a cameo by Danny Trejo couldn’t make this one work. A stinger promises there’s more to come. That’s a little scary.

The Vigilante Diaries is presented in its original aspect ratio of 2.40:1. The 1080p image is arrived at with an AVC MPEG-4 codec at an average 25-30 mbps. This high-definition image presentation does have its high moments. There’s some detail here that looks better than the budget would suggest. Unfortunately, there a lot of really bad CG here that cheapens an otherwise rather sharp picture. Black levels are strong except, again, when CG is involved, which happens far too often in this film. Some of the locations look stunning. There’s a monastery exterior that’s quite nice and an opera house interior with nice layers of smoke and light. It’s not enough to balance against crappy CG.

The Dolby TrueHD 5.1 is often alive with explosions and gunfire. It all gets a nice boost from a pretty solid bass response. Dialog is fine most of the time, but as I’ve already mentioned, I think the mixing on the score is unfortunate. It intrudes in several places and completely ruins any immersive qualities the rest of the sound field might provide.

Behind The Scenes: (7:26) Mostly a promotional piece with very little real production footage.

I can appreciate this kind of film when it keeps me entertained. I don’t need a complicated story or even exceptional thespian performances. I don’t like going around in circles with a plot merely intended to set up the punchlines, as in fists and CG blood. That’s the rub of this job. You have to watch them no matter how bad. You see I have this deal with Hollywood. They make ’em. I watch ’em. “There is no discharge from this service.”

Gino Sassani is a member of the Southeastern Film Critic's Association (SEFCA). He is a film and television critic based in Tampa, Florida. He's also the Senior Editor here at Upcomingdiscs. Gino started reviewing films in the early 1990's as a segment of his local television show Focus. He's an award-winning recording artist for Omega Records. Gino is currently working on his 8th album Merchants & Mercenaries. Gino took over Upcomingdiscs Dec 1, 2008. He works out of a home theater he calls The Reel World. Favorite films: The Godfather, The Godfather Part II, The Body Snatcher (Val Lewton film with Karloff and Lugosi, not the pod people film), Unforgiven, Gladiator, The Lion King, Jaws, Son Of Frankenstein, The Good, The Bad And The Ugly, and Monsters, Inc.
Shrek: Anniversary Edition (Blu-ray) Kung Fu Panda 3 (Blu-ray)