I Am Wrath (Blu-ray)

Posted in: Disc Reviews by Brent Lorentson on August 1st, 2016 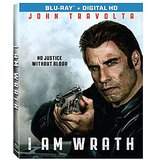 Don’t let the artwork scare you off. Yes, the cover design for this disc may be the worst I’ve seen this year, but the movie actually isn’t half bad.  John Travolta has hit a bump in his career, and it seems the big blockbuster projects just don’t seem to want to reach out to him.  Sure, he has a habit of going over the top in roles, but for the most part he’s still one of the few personalities I still enjoy seeing on the screen who’s been around since before I was a kid.  Then you’ve got Chuck Russell (Nightmare on Elm Street: The Dream Warriors and The Blob remake) dusting off his director’s chair to helm a film again, and, well, I Am Wrath quickly starts to become a film I can be excited about.

I Am Wrath makes a very conscious decision to open the film with images of violent acts caught on security cameras.  Lately you can’t even watch the news without hearing about a shooting or some sort of violent attack that has been caught on film.  Though it’s an effective way to start the film, the problem is it doesn’t really tie into the rest of the film except to point out from the beginning that there is a lot of violence occurring in the world. So if you were worried or hoping for some sort of social commentary, well, that isn’t here.  Instead what we’ve got here is a by the numbers revenge film. It’s nothing to complain about, but if you were hoping for a story with a little more meat, sorry, but this comes up short in that department.

Travolta plays Stanley Hill.He seems to be your average guy with a happy, loving family, but all that is destroyed in an attempted robbery that goes wrong.  After his wife is killed, Hill does what he can to cooperate with the police and is even able to finger the man responsible for killing his wife, but instead of getting justice, the police simply let the man go.  Hill is understandably upset, and upon reading a couple passages from the Bible, Hill decides it’s up to him to find justice.  And here is where it is revealed that Hill is former Black Ops, and of course has the training to take down small armies.

Helping Stanley take down the criminal syndicate is Dennis (Christopher Meloni), who used to be one of Stanley’s comrades.  One of the film’s strengths is the chemistry between Travolta and Meloni, whether it’s the simple banter or how the two work together during the film’s action sequences; they are what make this film fun to watch.  What’s surprising is the amount of action that is spread throughout the film. Considering the film is made on a smaller budget, you couldn’t tell that from just looking at it.  The action is well-shot and well-choreographed.

So if it has all these positive things going for it, why am I not just embracing this with more love?  Well, because we’ve seen this all before, and it gets predictable to the point where you can just call out to the screen what is going to happen next.  There’s nothing wrong with a predictable action romp, but in these days when you have The Raid, well, the bar has been set, and if you are not ready to jump in the sandbox and attempt to compete with that film, well, you run the risk of being a forgettable film.  And that is what is what plagues this film. It executes its scenes well and manages to be fun, but the story has been recycled to death, and nothing new is brought to the table.

I Am Wrath is presented in a 2.40:1 format.  The 1080p image is arrived at with an AVC MPEG-4 codec at the average of 30 mbps.  The film is conservatively shot by Andrzej Sekula, who is most famous for shooting both Pulp Fiction and Reservoir Dogs.  The film has just the right amount of grit while presenting a sharp image.  When the film literally slows down at moments, there is a motion blur that just has the sequence come off as cheesy rather than stylish.  Overall it looks good, but really nothing stands out.

The DTS-HD Master Audio 5.1 is what you would expect from an action-heavy film.  The gunfire is well-spread and the dialog is clear,  There is one moment, though, in a club where we see people dancing, and, well, it’s obvious that the extras have no idea what beat they should be dancing to.

Commentary with Director Chuck Russell and Writer/ Actor Paul Sloan:  It’s fun listening to Sloan see his script come to life for the first time; it’s like a little kid at Christmas at times.  The duo makes this a fun and informative experience with very few moments of silence.

While the film certainly is far from perfect, I always have fun seeing Travolta on the screen, and I like seeing Chuck Russell back at work.  This is better than your standard straight-to-DVD action film, but it’s also not exactly breaking the mold.

Brent Lorentson is a horror writer and film critic based out of Tampa, Florida. With a BA in Digital Film, he co-wrote and co-directed Scavenger Hunt. His short stories have appeared in various horror anthologies. In 2019 his short script Fertile Blood will be a part of the anthology horror film Slumber Party. He is currently working on his first novel A Dark and Secret Place set to be released in late 2019. Favorite Films: Taxi Driver, Fight Club, I Saw the Devil, The Wild Bunch, Dawn of the Dead, A Clockwork Orange, Pulp Fiction, Heathers, The Monster Squad, and High Fidelity.
Exclusive Interview With Jason Lockhart Of All American Bikini Car Wash Tuesday Round Up: August 2, 2016