Posted in: Disc Reviews by Gino Sassani on August 22nd, 2016 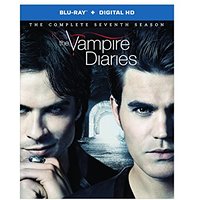 The Vampire Diaries is finally living up to its name. Elena is asleep until Bonnie dies, so the characters have promised to keep a record of all the goings on in Mystic Falls and with their lives. And there’s a lot to write about. Mystic Falls has been evacuated so that Lily and her family of heretics won’t kill everybody in town. They’re living in the Salvatore mansion, and Carolyn is carrying twins that don’t really belong to her. And Damon…he’s just being…Damon. All of them are either trying to steal or running away from something called The Phoenix Stone. Elena’s going to have a lot of catching up to do, and so do you if you haven’t been watching all along.

What is Mystic Falls? Who the heck are Damon and Elena, you ask? Bonnie? You’ve got questions. We’ve got answers, but not here. You’ve heard me say this before, and it’s become more and more true of television shows these days. If you don’t know what I’m talking about, you’re just not ready for Season 7 of The Vampire Diaries. But you are in luck. You can check out my reviews for the previous seasons here: Vampire Diaries Reviews. Then you can pick them up and start a mega-marathon session. Once you’re up to speed, join us back here for the next thrilling installment.

Bonnie’s spell from last season freed Lily Salvatore (Wershing) from their prison. She’s Damon and Stefan’s mother, and she thinks she has a calm, civilized little family going here. Of course, they’re as calm and civilized as the Manson Family. The heretics are vampires who are also witches. They’ve been locked up for a hundred years or so and are a bit eager for blood. They include Valerie (Blackmore) who is actually the rather sane member of the group. Then there are the lesbian vampire chicks Nora (Byrne) and Mary Louise (Liane). They are quite the bloodthirsty pair. The show might think it’s breaking new ground here, but Hammer did the lesbian vampire thing much better back in the 1970’s with their Karnstein Trilogy. They aren’t the worst of it, however. Lily wants to bring back their patriarch, Julian (Lasance), who is completely crazy and power-hungry. He becomes the big bad for everyone in the first half of the season. That battle will split our lovers and cause the expected carnage. Meanwhile, Matt (Roerig) is trying his best to patrol the streets and keep humans from entering the city and getting themselves invited as lunch. He’s moving up from cop to Sheriff.

The season’s Macguffin is an interesting thing called The Phoenix Stone. Alaric (Davis) wants to use it to revive his dead wife. Instead he releases other vampires. It turns out that the stone is a Hell for vampires. When a vampire is stabbed with a dagger containing the stone, that vampire ends up in a Hell where they have to discover their unfinished business. If they do and a witch casts the spell, they can return. As you might expect, both Damon and Stefan spend a little time in Vampire Hell. Damon’s ends up being the strongest episode of the season and another exceptional performance from Ian Somerhalder.

There’s also another new strong character in Rayna Cruz, played by Leslie Anne-Huff. She is the one who is supposed to possess the dagger and stone. She’s from a long line of vampire hunters who send vampires into the stone. She can track them once she’s marked them with her dagger. This puts more than one of our heroes on the run throughout the first half of the season.

Add to all of this that Caroline is pregnant with magical twins. The girls are actually the unborn babies of Alaric and his dead wife. There’s a Gemini coven out there who needed these babies to survive and had them transplanted to Caroline. Actress Candice King really gives her best performance of the series this season. The plot point might be a little lame, but you have to give King a lot of credit for providing a ton of heart in the role.

The big trouble for the first half of the season is the overuse of flash-forwards and flashbacks. There is a storyline that takes place three years in the future. We get it in short bursts in the style you might recall from How To Get Away With Murder. The problem is that we’re getting these threads in too-short pieces. When the show finally catches up to the three years, it’s been such a buildup that it’s rather anticlimactic in the end. That leads us to the second half of the season.

Rayna pretty much becomes the second half’s big bad. But she’s just not ruthless enough, and the actress never sells us on that quality. It’s obvious to the show’s powers that be that she can’t really carry that big bad mantle on her own, so we also have a secret group called The Armory. These guys have been keeping powerful artifacts and beings hidden from the world. They have an awesome bat-cave, and it is here that the season’s dramatic finale is set. It’s a pretty explosive finale and sets up Damon and Enzo on a journey that will likely kick off next season’s festivities.

If there is a problem with the season, it’s not really the time jumps. The show can’t seem to move away from Elena. I understand that she would be mentioned from time to time, but her presence still dominates a series that is, quite frankly, better off without her. I was looking forward to the show taking advantage of the characters that remain, and it has. Both Matt and Caroline have evolved into very strong and compelling characters. If anything Matt is underused here. But Damon’s character in particular gets too bogged down in the angst of Elena that we don’t always get to see that great Somerhalder performance.

A new twist I do like is that this season has also become The Vampire Diaries Roadshow. Characters are on the move a bit this season. From Alaric’s trip to Amsterdam looking for a spell to use the stone to the running characters end up doing from said stone. This season sees a cross-over with The Originals in New Orleans. There are also stops along the way in New York, North Carolina, Dallas, and The Philippines. I like that aspect of the season, because I thought the show often got too bogged down in Mystic Falls.

The Vampire Diaries is presented in its original 1.78:1 aspect ratio. The 1080p image is arrived at with an AVC MPEG-4 codec. Warner has gone back to 8 episodes a disc. It’s a criminal idea and someone needs to be fired. The bit rates come in at the early teens. That’s barely over DVD specs. You should NEVER have compression artifact on a DVD. For merely pennies more we should be getting 2 more discs. This is a shameful transfer of a series that has wonderful production design. The show’s execs should be furious. I have given Warner a lot of credit for putting these shows out on Blu-ray. Let’s respect the fans with strong high definition video presentations.

There are a few Audio Commentaries on selected episodes. There are spoilers, so do not listen to them until you’ve seen the season through at least once.

Directing Vampires: (7:20) Paul and Ian take us behind the scenes as they each direct an episode this season. They also take Twitter questions.

If the show is going to finish strong next year in its final season, it will have to move away from Elena. I suspect we will actually see just the opposite. I’m afraid the season will be one long slog toward the reunion of Damon and Elena. Perhaps that’s how the fans want it to end. Me, I thought the show could have had new legs if it had just moved on. It won’t be taken but my advice to Julie Plec…”Don’t try to get the band back together.”

Gino Sassani is a member of the Southeastern Film Critic's Association (SEFCA). He is a film and television critic based in Tampa, Florida. He's also the Senior Editor here at Upcomingdiscs. Gino started reviewing films in the early 1990's as a segment of his local television show Focus. He's an award-winning recording artist for Omega Records. Gino is currently working on his 8th album Merchants & Mercenaries. Gino took over Upcomingdiscs Dec 1, 2008. He works out of a home theater he calls The Reel World. Favorite films: The Godfather, The Godfather Part II, The Body Snatcher (Val Lewton film with Karloff and Lugosi, not the pod people film), Unforgiven, Gladiator, The Lion King, Jaws, Son Of Frankenstein, The Good, The Bad And The Ugly, and Monsters, Inc.
Once Upon A Time: Season 5 (Blu-ray) Tuesday Round Up: August 23, 2016