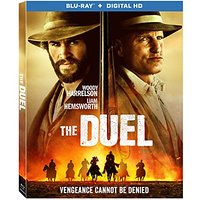 “You’re about to witness a Helena duel…a most noble affair of character and honor.”

A “Helena duel” is also a brutal, bloody ritual where two combatants are joined at the wrist before engaging in a knife fight to the death. That combination of genteelness and barbarity is at the heart of The Duel, a Texas-set Western that reaches for grandiosity and doesn’t quite get there, but is nevertheless thoroughly entertaining.

The film opens in 1866 and gives us an illustration of the titular Duel as charismatic preacher Abraham Brant (Woody Harrelson) stabs an adversary to death in Helena, Texas. About 20 years later, the dead man’s son grows up to be Texas Ranger David Kingston (Liam Hemsworth), who is tasked by the Governor of Texas (William Sadler) with a special mission. David is charged with finding out why Mexicans are being murdered near Mount Hermon, a small town run by Abraham.

David assumes a new identity and sets out for Mount Hermon with wife Marisol (Alice Braga), who dreaded being left at home by herself again. Once the couple arrives, they immediately get in the good graces of Abraham, who appoints David town sheriff and takes a special interest in Marisol. However, there’s danger around every corner — most frequently from Abraham’s live-wire son Isaac (Emory Cohen) — and David eventually discovers the truth about the murdered Mexicans.

There are a lot of interesting elements in The Duel, which was previously on the 2009 Black List of best unproduced screenplays. The movie nods to everything from Gangs of New York (a charismatic villain killing the father of our young protagonist in the opening sequence) to Cormac McCarthy’s “Blood Meridian” (Abraham is heavily based on that novel’s Judge Holden). Harrelson’s pale, hairless appearance here also makes it hard not to compare him to Marlon Brando’s Col. Kurtz in Apocalypse Now (with Hemsworth sent to neutralize him in the Capt. Willard/Martin Sheen role). Obviously, these are lofty touchstones to try and emulate, so The Duel tries to remix them in telling its own story.

Sometimes that story gets a little jumbled. For example, there was some solid dramatic potential in David balancing his desire to avenge his father’s death vs. his duty as a Texas Ranger. However, both elements are largely tossed aside once Abraham sets his sights on Marisol. The marriage between David and Marisol is quietly tenuous to begin with since she was initially given to him as repayment of a debt, a nice detail that complicates their connection. On the other hand, a subplot involving an Irish brothel worker (Felicity Price) who also finds herself stuck in Mount Hermon feels superfluous because David already has more than enough motivation to take Abraham out.

Harrelson — with his folksy cadence and a slightly mad glint in his eye — makes for a magnetic villain, even if he (literally) pales in comparison to Brando’s Col. Kurtz. Early on, it’s fun to watch the cat-and-mouse game between Abraham (who mentions Helena out of the blue to try and elicit a reaction out of David) and his young adversary. To be honest, I’m not the biggest fan of Hemsworth and his wooden line delivery in big-budget spectacles. (Harrelson and Hemsworth previously co-starred in the Hunger Games films.) However, I enjoyed him in the neo-Western Cut Bank and he makes for a solidly laconic, physically imposing hero here. The tools are here for Braga to be an equally important part of that relationship triangle, but Marisol is ultimately too passive of a player. On the other hand, Cohen is great as Abraham’s sniveling punching bag of a son.

In addition to the Helena duel sequence — which gets a redux toward the end — the story offers a chilling, satisfying answer to why/how those Mexicans are getting killed. (The movie also slyly notes that the Governor of Texas only sent someone to investigate the deaths at Mount Hermon only after a prominent Mexican was killed.) The result is a thrilling manhunt toward the end. Of course, it all comes down to a mano-a-mano confrontation. The Duel might be relatively short on action, but it is engaging throughout its 110-minute running time and quite effective once the bullets start flying and the knives come out.

The Duel is presented in an aspect ratio of 2.40:1. The 1080p image is arrived at with an AVC MPEG-4 codec at an average of 19 mbps. A wide aspect ratio is a good start for any Western. In The Duel, it helps showcase the movie’s expansive vistas during David and Marisol’s trek to Mount Hermon. The wide format also adds an element of scope during the movie’s climactic manhunt. Otherwise, this is a clean image that doesn’t quite pop from the screen. (Perhaps due to the relatively low bit rate.) The movie’s rainy opening duel sets a murky tone, but we do eventually get some lush greens. And while Abraham’s all-white wardrobe is properly resplendent, black levels could have been inkier and offered more defined separation.

The DTS-HD Master Audio 5.1 track doesn’t shy away from silence, which is somewhat surprising for a movie with so many outdoor scenes (and the potential for ambient/atmospheric noises). The most lively non-action scene, in terms of rear speaker activity, involves Marisol entering a church filled with snakes during one of Abraham’s sermons. There’s some understated sub activity whenever a galloping horse appears on screen, and every instance of rifle fire is accompanied by a forceful pop. Overall, a solid, well-balanced track.

Audio Commentary with director Kieran Darcy-Smith and production designer Toby Corbett: The pair engage in a consistently informative chat, but they’re not afraid to pipe down and let the movie speak for itself. (In fact, Darcy-Smith and Corbett do just that so the mournful piece of music that plays over the opening duel can take center stage.) Otherwise, we get some interesting anecdotes about filming in Mississippi (the director got a nasty infection on one leg after being bitten by a spider) and the construction of the tiny town of Mount Hermon (which is Corbett’s area of expertise).

The Duel is more of a character-based drama than a straightforward shoot-em-up. The movie is probably a bit too ambitious at points where a more streamlined story might’ve been appropriate, but I don’t mind it too much when storytellers take big swings. Check this out if you’re interested in a Western-tinged “Heart of Darkness.”