Posted in: Disc Reviews by Gino Sassani on October 27th, 2016 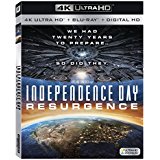 “The countless lives we lost in the War Of ’96 did not perish in vain. They inspire us to rise from the ashes as one people of one world. For 20 years the world has seen no armed conflict. Nations have put their petty differences aside. United, we rebuilt our families, our cities and our lives. The fusion of human and alien technology not only enabled us to defy gravity and travel at unimaginable speeds. It also made our planet finally safe again.”

Not so fast there, cowboy. There would be no need for a sequel to the 1996 hit film Independence Day if the big bad aliens weren’t coming back. Unfortunately, the aliens made the same mistake that Dean Devlin and Roland Emerich made with the film’s sequel. They both waited too long.

The first Independence Day was a groundbreaking film. It was a disaster movie on the scale that Irwin Allen could only dream about. The f/x were cutting-edge, and there were great characters that we could care about. A lot has changed in 20 years. Just as the film’s aliens discovered that we had the time to integrate their technology to create better weapons, the movie-going public has since been exposed to mind-numbing f/x that have truly become somewhat commonplace. There’s nothing here that could be considered a milestone in film technology. This is a sequel that came too late to capture all of the magic of the first film. And that’s actually too bad, because I was holding out hope that somehow Resurgence would take me into that world and dazzle me like they did 20 years ago. That just never happens here. Somehow I’m beginning to understand Will Smith’s decision to stay away from the franchise that really brought him to the world’s attention as a serious movie actor.

You get the idea from the opening lines of the film above. Earth has morphed the alien technology with our own. We have defense bases on not only our moon but a moon of Saturn. We have fancy new ships and big crazy laser cannons. Jeff Goldblum’s David Levinson is now the Director of the ESD (Earth Space Defense) and has guided this transformation of technology to protect us from the inevitable return of the aliens. Bill Pullman’s former President has been having nightmares that are really a connection to the aliens. Judd Hirsch returns as David’s father and remains the more endearing character in the film. He’s written a book called How I Saved The World, but is having trouble getting it noticed. Brent Spiner’s crazy scientist has been in a coma since the first invasion and has just now reawakened. Ships around the world are turning back on, and the Saturn moonbase has gone dark. Yes, they’re back. The stage is set for Resurgence to try to suck us back in.

There’s also a “next generation” of characters that represent the new world of this alien/human hybrid technology. Will Smith did not return, and his character is an honored hero who died in one of the early test of the hybrid technology. Now his son Dylan Hiller (Usher) is the hotshot fighter pilot. He’s part of a triangle of characters that includes Patricia Whitmore (Monroe) who is the daughter of the former president and has followed in his footsteps first as a fighter pilot and then in politics as a White House speech writer. She’s a childhood friend of Dylan’s and in love with disgraced pilot Jake Morrison who was responsible for an accident that affected Dylan. Now the two who have been enemies must all come together when things get bad. Jake is played by Liam Hemsworth, who is no stranger to the space opera. He was once a frontrunner to play Captain James T. Kirk, a part that went to Chris Pine, while his brother got to play the iconic captain’s father. These three characters do have a little nice chemistry, but the script and pacing never really allow it to develop as characters did in the original film.

Another issue is that this human/alien technology makes the film’s 2016 a very different place than the real 2016. A strength of the first film was how easy it was to relate to these people and places. I couldn’t relate to this world. It’s as alien as any futuristic world and is no longer the world outside of my window. In fact, the film appears to double down on that flaw. The screen is often too busy showing off the new look of the technology that with each frame I found myself more and more distanced from the place on the screen. In two movies I went from being a participant to being an uninterested observer. What’s the difference? About $500 million in ticket sales.

Independence Day: Resurgence is presented in its original aspect ratio of 2.39:1. The ultra-high-definition  image is arrived at by an HEVC codec. The ultra-high-definition image presentation is pretty amazing. I got to see the original in 4K recently, and this image blows that one away. Here the difference in real world technology is put on display. Colors rock in the new image, particularly when there are fiery explosions. Much of the film has a cold color temperature that might not blow out color, but makes up for it in detail and crystal clarity. Surprisingly, there is not as much texture here as the first. That’s the difference between practical f/x and computer-generated images. Black levels are the deepest I’ve seen to date. That also allows for wonderful contrast in the inky blackness of space dominated by the sharp pinpoints of starlight.

The Dolby Atmos presentation defaults to a sweet 7.1 track. With this much action you can’t help but feel the film happening all around your comfortable theatre seat. The dogfights allow for lasers to zip past your head while the scream of fusion-drive engines swoosh all about your room. There’s a dynamic score that takes full advantage of the original Arnold score. In all of this mayhem there is plenty of space for dialog and the quieter moments.

There is an Audio Commentary with Roland Emerich.

Deleted Scenes: (8:24) There are eight with a play-all option. There is also an option for a Roland Emerich commentary.

The War Of 1996: (5:11) This one is made to look like a news-extra look back at the events of the first film and the evolution of the story to this one. It’s a bit of a bridge that features many cast members in character.

It’s Early ABQ!: (3:07) An appearance by the Levinsons on a local morning talk show.

Another Day – Making Independence Day: Resurgence: (55:25) This is a rather nice behind-the-scenes feature in four parts with a handy play-all option. You get everything here. Tons of conceptual art while cast and crew take you on the set to see all the secrets of the f/x.

It might not be completely fair to compare this movie so much with the original. But it’s not just me. The filmmakers themselves go too far out of their way to reproduce certain moments and images from the original. You get the people exiting their cars in the middle of the street to see disaster. Even the dialog at the film’s end is a rather pitiful word-for-word from the first. The late Robert Loggia makes a cameo that is a little sad. He’s obviously unhealthy and passed shortly after the appearance. I loved the actor and character, but sometimes it’s best to let it be. It reminded me of all the times events paraded a debilitated Mohammed Ali in front of the cameras. Most of us didn’t want to remember him like that, and I’m pretty certain he wouldn’t have wanted us to remember him like that. I understand why the film was finally made and why they would want to conjure images of the first. I’ve wanted a sequel for years. They just waited too long. Fox wouldn’t run any press screenings for us when the film was hitting theaters. Now I know why. One thing that hasn’t changed for Devlin & Emerich: “They like to get the landmarks.”

Gino Sassani is a member of the Southeastern Film Critic's Association (SEFCA). He is a film and television critic based in Tampa, Florida. He's also the Senior Editor here at Upcomingdiscs. Gino started reviewing films in the early 1990's as a segment of his local television show Focus. He's an award-winning recording artist for Omega Records. Gino is currently working on his 8th album Merchants & Mercenaries. Gino took over Upcomingdiscs Dec 1, 2008. He works out of a home theater he calls The Reel World. Favorite films: The Godfather, The Godfather Part II, The Body Snatcher (Val Lewton film with Karloff and Lugosi, not the pod people film), Unforgiven, Gladiator, The Lion King, Jaws, Son Of Frankenstein, The Good, The Bad And The Ugly, and Monsters, Inc.
“31 Nights Of Terror” Contest: Win Abbott and Costello Meet Frankenstein On Blu-ray Papa Hemingway in Cuba