Our Kind Of Traitor

Posted in: Disc Reviews by Brent Lorentson on October 28th, 2016 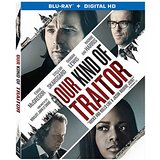 When it comes to spy novelist John le Carre (Tinker Taylor Soldier Spy, The Night Manager), his books seem to produce great films and mini-series but are far from being box-office darlings. Each production of one of his novels seems to be filled with talent in front of and behind the camera.  When it comes to the release of Our Kind of Traitor, despite the impressive cast it’s a film that managed to slip through the cracks and seems to have limped its way to a DVD/Blu-ray release when really it’s a film that deserves to be appreciated more on the big screen.  While it may not be filled with the spectacle of special effects and explosions, it’s a film that garners some impressive performances throughout and has a story that quickly pulls the viewer in.

Perry (Ewan McGregor) and his wife Gail (Naomie Harris) are supposed to be on a romantic holiday.  It’s the kind of holiday a couple takes together to try to salvage their relationship before throwing in the towel and heading to divorce court.  Perry is a professor with infidelity issues, while his wife is the breadwinner of the family as an overworked attorney.  For them it seems the vacation has worked and the intimacy in their relationship has been rekindled, that is until Perry accepts an invitation from a Russian stranger.  Dima (Stellan Skarsgard), is an overpowering presence as he convinces Perry to tag along with him as he goes to a lavish house party and later for a morning tennis match.  What Perry believes is nothing more than generous hospitality is instead a charade to pull him into doing something very dangerous.

While I understand films have an expectation for you to suspend your disbelief while the story plays out on the screen, I had a hard time believing any of the above would happen.  When it is revealed that Dima is a money launderer for the Russian mob and has evidence that links the mob to political players in the UK, sure, this is the espionage portion of the film that comes into play, but I never could believe this.  So when Perry agrees to deliver a flash drive to members of MI-6, I felt this was more of a stretch than believing McGregor was at one time a power Jedi.  Perry still goes through with handing over the flash drive and in the process is detained at the airport; it would seem the professor really believed he’d be able to just walk away with no questions asked, since he was just helping out a Russian mob figure that got into a jam.  I mean, really, we’re supposed to think a reasonably intelligent man would have such terrible decision making skills?

Then enters Hector (Damian Lewis), an agent with MI-6 who has had his career moderately disgraced by a son who got into trouble.  He also has a score to settle with the Prince who has ties to the Russian mob.  Hector sees Perry as a pawn to use with Dima to get the information he needs to help clear his son’s name.

Because of the performances I was able to look past how unrealistic this story was; after all, seeing a professor of poetry threatening a Russian gangster simply seems like a silly scenario, but to everyone’s credit, they make it work. McGregor just has the right kind of doe-eyed charisma that has us rooting for him while everyone else seems to just want to use him.  While we’re supposed to be on board with Gail being some kind of powerhouse attorney, we don’t get to see the verbal showdowns between her and the British officers like you’d expect; instead they seem to just make her an emotional supportive role. Yeah, a bit of a sexist move, considering I think the film would have worked more if the roles of Gail and Perry had been reversed, since it’s more believable that an attorney could talk her way through these intense meetings, more so than a guy with a poetry major. Heck, when they offer him a gun at one point I felt the scene was a bit silly, since I figured his wife would have handled the situation better.

When the film reaches the midway point it seems to have finally hit its stride and manages to be engaging and doesn’t let up as everyone seems to be trying to outmaneuver the other.  Sure, Dima is a bad guy, and Hector isn’t quite the innocent figure either, but seeing how they are willing to do what it takes to protect their families does allow them to be more likeable characters than they should be. By the time the film concludes, while it’s not exactly a remarkable film, I at least don’t feel I wasted my time, and it does manage to entertain throughout; after all, isn’t that what a film is supposed to do?

Our Kind of Traitor is presented in the aspect ratio 2.40:1.  The 1080p image is arrived at with an AVC MPEG-4 codec at an average of 24 mbps.  Despite having beautiful locations throughout the film, there is an overall coldness to the film.  With the exception of a birthday sequence, the film seems to lack any warmth; all the lushness of the color palette has been muted.  The saturation of the film works in setting the tone of the film, even in a scene at an airport where the whites have been blown out it still manages to have a dull look to it.  In the nighttime shots especially when the film heads to the French Alps, there seem to be more blues here, and the night shots still offer plenty of detail without crushing the blacks.

The DTS-HD Master Audio 5.1 track makes an impact when it is needed.  Most of the film relies on dialog exchanges, and throughout we have clean, crisp dialog.  When the language shifts to Russian, thankfully we are given subtitles.  In the rare moments where we have scenes of action or gunfire, there are some moments where the dynamic range of the speakers is used, most notably in a scene in the final act with a dog that is killed off screen by oncoming attackers.

The Making of Our Kind of Traitor: (10:58) The standard collection of brief interviews with cast and crew about what brought them to the movie with a couple of BTS clips.

Deleted Scenes (5:27) Nothing really stands out here; once you see the scenes, it’s easy to see how this was simply fat from the film.  There are five scenes total.

The Cast: (3:27) Members of the cast talk about their characters; nothing much added from the making-of feature.

The Story: (3:05) The cast and crew give their insight as to why they believe this is a important and relevant film that needed to be adapted and made.

If you can manage to turn off your brain and just let the film play out for you, I’m sure you’ll have a good time with it.  It’s a shame films like this are pushed away from having larger theatrical releases, because this is a film that could have benefited from a wider release.  While it’s not perfect, it’s still a fun little thriller with some really good performances sprinkled throughout.

Brent Lorentson is a horror writer and film critic based out of Tampa, Florida. With a BA in Digital Film, he co-wrote and co-directed Scavenger Hunt. His short stories have appeared in various horror anthologies. In 2019 his short script Fertile Blood will be a part of the anthology horror film Slumber Party. He is currently working on his first novel A Dark and Secret Place set to be released in late 2019. Favorite Films: Taxi Driver, Fight Club, I Saw the Devil, The Wild Bunch, Dawn of the Dead, A Clockwork Orange, Pulp Fiction, Heathers, The Monster Squad, and High Fidelity.
Papa Hemingway in Cuba Mr. Church (Blu-ray)