Posted in: Disc Reviews by Brent Lorentson on September 29th, 2017 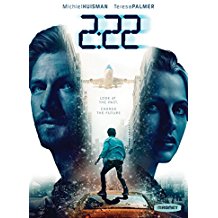 With a title like 2:22 it’s more than a little on-the-nose to point out something major is going to occur at this time.  For a film about premonitions, it’s a shame the film opens up as it does, because it leaves no mystery to the audience and simply tells us what is going to happen, or at least something close enough in the film’s final act.  I hate films that are done in flashback just as much as I hate it when it doesn’t put in the effort to conceal how things are going to unfold.  In a lot of ways the film is like Groundhog Day, only instead of the same day replaying over and over, it is the same events occurring over and over for our protagonist to figure out.

Dylan (Michael Huisman) is an air traffic controller who is good at his job; he claims it’s his ability to see patterns that helps him do his job as well as he does, though after a freak accident in the control center nearly causes two planes to collide, he is put on a temporary suspension. It just so happens that Dylan meets Sarah (Teresa Palmer), who was on one of the flights that almost collided, and the two seem to fall for one another at first sight.

The romance angle with the story is really the film’s strength.  The chemistry between Huisman and Palmer works well enough that we can see these star-crossed lovers belonging together. But as Dylan continues to see the patterns shaping around him, with people and events repeating day after day at the same time, Dylan starts to lose it as he sees that all these connections seem to revolve around some major event that is going to take place at Grand Central Station in New York at 2:22.

What’s annoying is the audience seems to figure this film out way faster than its lead character, and the solution seems to be so obvious it’s frustrating that it is never even addressed. I understand the need to have suspension of disbelief when watching a film and the need to just throw out logic, but it seems all this could have been prevented with a few quick decisions.

There is a leap in judgment that Dylan makes at one point in the film where he believes that he and Sarah are reliving events from the past.  While I’m fine with the character making these decisions, we just don’t get to see enough of why he would make this leap and why he seems to be okay with this.  The film wants so badly to be clever but it never puts in the work to challenge the characters or the audience.

As for the first act putting so much emphasis on him being an air traffic controller, it leaves me to believe in earlier drafts of this film the climax was supposed to be at an airport rather than a train station.  Really, when it comes down to it, aside from seeing the near plane collision, the first act of the film serves very little to the plot.  It even introduces us to characters that he never bothers to go back to, and they are supposed to be his only friends.  Basically it’s as though we’re supposed to forget the first act and just go along with the rest of the film.

While the film is ambitious, it never reaches its full potential.  If not for the film’s two leads and their onscreen chemistry, this film would be a complete bust.

2:22 is presented in the aspect ratio 2.35:1.  The 1080p image is arrived at with an AVC MPEG-4 codec at an average of 28 mbps.  The film has a very cold look; there is a slight bit of saturation as well as some blue hues.  Blue seems to be a crucial color in this film, as we see Dylan in it most of the film.  The film has a clean image throughout and has no compression issues.  With the film’s few digital effects they blend well with the final render of the film.

The DTS-HD Master Audio 5.1 track is rather a critical key to the film as it relies heavily on the ambient sounds of the city to help Dylan piece together the patterns.  Between the sound mix and the use of subs in some of the more critical “boom” scenes, the audio is definitely presented well here.

Time with the Story and Characters: (12:29) They discuss the story and the characters while also discussing what they hoped to achieve with the film.

Working with the Director and Cast: (8:40) The director discusses what drew him to the film and the story he wanted to tell.

Recreating New York and Grand Central: (6:20) They take the time to discuss why the locations were picked and recreated for the film.

This is one of those perfect movies for when you are looking for something to watch on Netflix and you’ve seen everything else.  Keep your expectations low and it’s an enjoyable film, but don’t be surprised if you find yourself getting frustrated by the choices the lead characters make.

Brent Lorentson is a horror writer and film critic based out of Tampa, Florida. With a BA in Digital Film, he co-wrote and co-directed Scavenger Hunt. His short stories have appeared in various horror anthologies. In 2019 his short script Fertile Blood will be a part of the anthology horror film Slumber Party. He is currently working on his first novel A Dark and Secret Place set to be released in late 2019. Favorite Films: Taxi Driver, Fight Club, I Saw the Devil, The Wild Bunch, Dawn of the Dead, A Clockwork Orange, Pulp Fiction, Heathers, The Monster Squad, and High Fidelity.
Captain Underpants: The First Epic Movie (UHD Blu-ray) (4K) Modern Family: Season 8