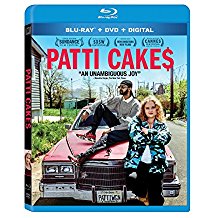 Between 8 Mile and Hustle & Flow, we’ve seen —and heard — our share of hip-hop underdogs. But we’ve never seen one quite like Killa P, aka Patricia Dombrowski…aka “Piggy Azalea” to the haters who want to take shots at her appearance. Either way, she is the white, overweight, wannabe female rapper at the center of Patti Cake$, a Jersey-set indie that became a sensation at the Sundance Film Festival earlier this year.

Patti (Danielle Macdonald) feels like she is hopelessly trapped in suburban north Jersey. She’s a 23-year-old underachiever who works at a karaoke bar and lives at home with her man-chasing mom Barb (Bridget Everett) and ailing, supportive Nana (Cathy Moriarty). So it’s no wonder Patti often retreats into a glitzy fantasy world where she is a hip-hop superstar alongside local idol O-Z (Sahr Ngaujah). Back in the real world, her best friend/hype man Jheri (Siddharth Dhananjay) encourages Patti’s rap dreams and tries to make them a reality by helping her secure a recording studio session and a gig performing at a club. (It’s at a strip club, but still…)

But it’s not until Patti connects with another outsider — a death metal-loving, black anarchist who calls himself Basterd (Mamoudou Athie) — that she really takes her shot. Patti, Basterd and Jheri are joined by unlikely MC Nana to form “PBNJ.” The group lays down enough tracks for a makeshift CD — don’t worry, everyone else in this movie is just as surprised by the fact that CDs are still a thing — and Patti works up enough courage to approach O-Z. Of course, the need for stable employment, Nana’s faltering health, Patti’s own insecurity, and other obstacles conspire to keep her down.

Patti Cake$ is the feature directorial debut for Geremy Jasper, who previously made his mark with music videos for Selena Gomez and Florence + the Machine. You can absolutely feel that sensibility in this movie; it’s not only there in the blinged out fantasy sequences inside Patti’s head — which are impressively rendered on a $1 million budget — but also in some of the rat-a-tat, percussive editing for some of the performance scnes. The director, with a big assist from cinematographer Federico Cesca, employs a documentary-like handheld style that adds real tension to an early, brutal rap battle.

Jasper also wrote the script, and — despite the movie’s effective stylistic touches — his personal connection to Patti’s plight is the major reason this film sings. (Check out the Special Features section for more.) I’m sure the rough language and raunchy lyrics will put a lot of people off, even though tracks like “PBNJ” are legit catchy. But the filmmaker brings great specificity and humanity to Patti and her inner circle.

Patti isn’t a delusional dreamer…she has doubts that severely cripple her progress on more than one occasion. I also enjoyed Patti (the white rapper) forming a bond with Basterd (the black metalhead), the musically bizarro version of her. Barb, a failed backup singer clinging to the very last bits of notoriety, predictably scoffs at Patti’s hip-hop aspirations. But it isn’t just the typical “rap isn’t real music” objection…there’s also an undercurrent of jealousy that Patti still has a faint chance to pursue the stardom that has completely passed Barb by.

There’s a reason we haven’t seen a protagonist like Patti, and I doubt this movie works nearly as well as it does without Macdonald’s terrific work. She is totally believable throughout, whether she’s trading insults in a rap battle or kindly looking after her Nana. The actress does a great job of very gradually transferring Patti’s swagger from her fantasies into real life. Everett is a terrific foil as Patti’s mom; Barb projects all the presence and self-confidence that Patti lacks because (unlike her daughter) she doesn’t have anything to lose at this point in her life. Meanwhile, Moriarty’s deep rumbling voice makes for a shockingly effective hip-hop hook. The rest of the cast is largely made up of novices who impress with their natural charisma. (Dhananjay’s optimism is especially welcome.)

Despite focusing on an unconventional heroine, Patti Cake$ follows a pretty familiar underdog template. But the movie’s thrilling, emotional climax is a testament to the way this movie makes Patti’s hip-hop aspirations relatable to anyone who’s dared to dream.

Patti Cake$ is presented in an aspect ratio of 1.85:1. The 1080p image is arrived at with an AVC MPEG-4 codec at an average of 35 mbps. Early on, it’s a tale of two movies as Patti Cake$ switches between the title character’s glitzy, rap video fantasies and her shabby, strip mall reality. The fantasy sequences show off smoky neon colors, and the inky black levels set the standard for similarly dark scenes inside the karaoke bar where Patti works or the gentlemen’s club where PBNJ perform. The movie eventually settles into Patti’s gritty life in New Jersey, and these scenes are shot in an urgent, handheld style that often results in some intentionally harsh lighting for outdoor daytime sequences. It doesn’t make for the cleanest or sharpest presentation, but it’s a great trade-off since it more effectively immerses us in Patti’s world.

The DTS-HD Master Audio 5.1 track is, not surprisingly, at its best when Patti’s music takes center stage. Initially, the dream sequences have an operatic, over-the-top feel that allows the track to flex its muscles. But when Patti and her friends start recording in Basterd’s secluded shack, the sound field reveals plenty of nuance as we get a little electric guitar thrown in the mix and the beat is slowed down and separated. There’s also good separation in the karaoke bar scenes; when the camera is on Patti tending bar, the music is relegated to the rears. This is a well-balanced presentation throughout, with the subs getting to strut their room-rattling stuff during any scene where we hear one of Patti’s thumping tracks.

A Slice of Cake$: (21:28) There is some terrific, fly-on-the-wall footage of the film being shot in glamorous spots like a strip club and a pharmacy. We also get input from the cast and crew; writer/director Geremy Jasper talks about loving music more than he loves filmmaking and how that passion led him to tell this story.

Director Commentary by Geremy Jasper: The filmmaker serves as an informative — and enthusiastic — guide through this movie…and all the real-life Jersey/New York locations where it was made. (Starting with the “Gates of Hell” at the very beginning of the movie.) I enjoyed hearing about the parts of Jasper’s life that made it on screen along with finding out that many of the performers in this film were new to acting.

Patti $ea$on Music Video: (2:55) The lo-fi video to this track looks and sounds homemade. I promise that’s a compliment.

Lyric Video: (1:33) A cool, creative take on the scene where Patti and Jheri freestyle on the hood of her “Pattiwagon,” with the lyrics springing to colorful life.

Promotional Featurettes: There are four minis here. Making the Music (1:45) focuses on the hard work Macdonald (an Aussie novice raper) did to prepare for her starring role, which earns praise here from music producer Skyzoo; Danielle as Patti (1:24) has Macdonald connecting deeply to her character’s “dream big” aspirations (especially since the actress doesn’t look like the typical Hollywood starlet); Geremy (1:48) focuses on the actor-friendly director, who first came up with the idea for this movie 15 years ago; and Jersey Women (2:04) spotlights the real-life women in the filmmaker’s life who inspired Patti’s mom and Nana in the movie.

Patti Cake$ was snatched up for a hefty price tag after its Sundance triumph, but the movie subsequently fizzled at the box office.

Here’s hoping it finds new life on Blu-ray. (And that Macdonald keeps getting offered juicy roles.) This is a thumping, affecting, rough-and-tumble indie that deserves to be seen.