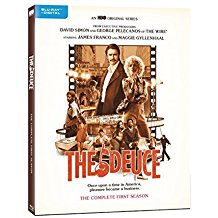 If The Wire isn’t the greatest television show of all time, it’s certainly in the conversation. That landmark HBO series was created by David Simon, who took a journalistic and novelistic approach in telling the story of a decaying city (Baltimore) and its various institutions. Now, Simon has teamed up with crime novelist George Pelecanos for The Deuce, which takes a similarly 360-degree approach in examining Times Square in the early 1970s and the evolution of the porn industry. Capturing every facet of that time and place doesn’t just mean that The Deuce depicts the lives of pimps, prostitutes, and police officers. It also means the show is alternately thought-provoking, tragic and darkly funny.

“You got some pimp in you.”

The Deuce takes its name from the nickname for NYC’s 42nd Street between 7th Avenue and 8th Avenue. The series begins in 1971 and we meet Vincent Martino (James Franco), a Brooklyn bartender who moonlights in Times Square in order to make ends meet…and pay off the many gambling debts accrued by twin brother Frankie (Franco again). Vincent is a hard-working and (more importantly) honest employee, which draws the admiration of made man Rudy Pipilo (Michael Rispoli). After boosting business at one of his jobs by outfitting the barmaids in skimpy leotards, Vincent is offered the opportunity to manage and makeover a failing gay bar in The Deuce. The idea is that Vincent will run and re-invent the bar — which is dubbed the Hi-Hat — and the mob takes will take its cut.

The Hi-Hat soon becomes a hangout and haven for all of the colorful characters in Times Square. That includes pimps like C.C. (Gary Carr) and his newest girl Lori (Emily Meade), who we see arrive fresh off the bus from Minnesota. There’s also bright but bored college student Abby (Margarita Levieva), who forms a connection with Vincent. Both the Hi-Hat and the massage parlor that the Martino Brothers end up managing on behalf of the mob also get unwanted visits from various members of law enforcement. (Let’s just the mobsters aren’t the only ones taking their cut from Times Square’s seedier businesses.)

“When you were little, didn’t you always want to be in the movies?”

“Daddies, husbands, pimps…they’re all the same.”

In addition to chronicling life in NYC during the early ’70s, The Deuce tells the story of the rise and mainstream-ing of the porn industry. More specifically, the series explores all the different ways that sex sells (whether it’s barmaids in leotards or prostitutes literally selling sexual favors in a tunnel). The Deuce also posits the notion that all sex is transactional to some degree. In addition to the parts of the show where a john pays a prostitute for her time, we get interactions like journalist Sandra Washington (Natalie Paul) leveraging the crush that NYC patrolman Chris Alston (Lawrence Gilliard Jr.) has on her in order get information for a story on the police department’s handling of sex workers.

To be clear, The Deuce is adamant about emphasizing the “work” portion of “sex work.” (Gyllenhaal absolutely nails a monologue in the series premiere about how sex is strictly a job for her.) Not surprisingly, there is plenty of sex and nudity in this show, but it is never glamorized. In fact, the scenes on the set of porn films probably go out of their way to show precisely how un-sexy getting naked in front of a camera can be. That being said, The Deuce gains high marks for being remarkably stylish as it evokes the films of the early 1970s. (It’s always a kick to glimpse the movies that are listed in the Times Square theater marquees, which includes everything from Patton to Mondo Trasho.)

The Deuce features plenty of familiar faces from past Simon and Pelecanos shows. Gilliard Jr. is joined by fellow Wire vets Chris Bauer (as a construction foreman who gets sucked into the sex trade), Gbenga Akkinagbe (as Larry Brown, a particularly intense and demanding pimp) and Clarke Peters (popping up for a single memorable scene in the finale), along with Treme alum Chris Coy (as a gay bartender at the Hi-Hat). There are also notable actors making a big impression in small roles — The Big Sick’s Zoe Kazan as Vincent’s philandering wife and Ralph Macchio(!) as a crooked vice cop — to complement some of the fresher faces in the cast. Carr, who brings menace and total commitment to C.C.’s delusions of grandeur about being a pimp, is the standout here and also the winner of the coveted “I Can’t Believe That Guy is British!” award. (Idris Elba in The Wire is a past winner, by the way.) I also enjoyed Dominique Fishback’s strong and sweet-natured work as Darlene, a prostitute who yearns for new experiences but consistently wilts under her pimp’s influence.

Franco and Gyllenhaal are obviously the biggest names here, and they’re both terrific. Franco pulls double duty as Vincent and Frankie and succeeds in creating two distinct characters: Frankie is more of a one-dimensional screw-up, but Vincent has a legitimate arc as he slowly and unwittingly becomes a pimp of sorts. (Much to his own chagrin.) Gyllenhaal is a knockout throughout and often conveys just as much with an expression of wonder (when she first experiences the “magic” of movies) and resignation (as Candy slowly realizes she needs to abandon the life of a prostitute).

There are so many rich characters in The Deuce that I wish we got more than 8 episodes to hang out with them. It’s clear the series has a lot more to say, but these opening episodes do a great job of getting the point across that people who work the hardest are the ones who end up getting, well, screwed

The Deuce: The Complete First Season is presented in its original aspect ratio of 1.78:1. The 1080p image is arrived at with an AVC MPEG-4 codec at an average of 23 mbps. I’ve never been happier that Smell-o-Vision didn’t totally catch on because otherwise The Deuce would overpower you with the stench of cigarette smoke and garbage on the street. The overall presentation has a subtle filmic grain to it that is appropriately gritty to the setting while nodding to the films that were made at that time. (Movies play a big role in The Deuce, even if they weren’t always flicks you could catch in mainstream cineplexes.) Black levels are inky and completely spot-on, which is key since so many of the show’s characters do their work at night or in a dive bar. (The one bright, colorful reprieve is a brief visit to North Carolina, which is a warm deviation from the show’s chillier, urban palette.) This is a top-notch, totally transportive presentation that highlights all of the care that has been taken to re-create New York in the early 1970s.

The DTS-HD Master Audio 5.1 track is more subtle than the visual presentation, in terms of taking us back in time, but still highly effective. The subs rumble to life in an understated way to emphasize the roar of a Cadillac engine. This is a dialogue-driven drama, but the rear speakers lend consistent, immersive support to any scene set on NYC’s bustling streets. The track, however, doesn’t fully get to flex its muscles unless we’re hearing an era-appropriate soundtrack cut (everything from The Velvet Underground to Ray Charles). Not surprisingly, a tremendous amount of attention has been paid to the details; I particularly enjoyed the scratchy audio emanating from Candy/Eileen’s answering machine.

Inside the Episodes: (14:35) These brief featurettes accompany each episode and feature input from co-creators David Simon and George Pelecanos, along with members of the show’s sprawling cast. Pelecanos, in particular, pops up often to point out the ways the show’s storylines mirror real-life events. (Most notably, one prostitute’s tragic fate in the season finale.) We also learn that Washington Heights doubles as 1970s Times Square for the show’s production, since the present-day, Disney-fied Times Square doesn’t look nearly as grimy as it did during the show’s time period.

Audio Commentaries: There are two tracks on this set, one for the 84-minute series premiere and another for the 70-minute finale. Simon, Pelecanos, director Michelle MacLaren (who helmed both the premiere and finale), and stars James Franco and Maggie Gyllenhaal are on hand to talk about the absolute necessity of filming in New York City (the day players and background performers are more authentic) and highlight the show’s themes (you don’t have to wear a flashy suit and a carry a cane to be a pimp). Definitely recommend you listen to these tracks; it’s amazing to learn just how much Simon and Pelecanos drew from real people and places.

The Wild West — New York in the Early ’70s: (11:49) This featurette emphasizes just how dangerous and dirty Times Square was in the early ’70s, when everybody was a hustler and prostitution was barely illegal.

The Deuce in Focus: (8:13) Three of the show’s directors — MacLaren, Franco, and Roxann Dawson — talk about their work on the show, which drew inspiration from Martin Scorsese’s Taxi Driver. Franco is very complimentary of the show’s various consultants (police consultants, mob consultants, etc.) for making his job easier, while MacLaren rightly gets a lot of credit for setting the visual tone of the show. She also points out the cool way the final shot of the season premiere mirrors the final shot of the season finale.

The Deuce: The Complete First Season features all 8 episodes on three discs.

Work is already under way on season 2, and it seems like the show will remain relatively intact even with star James Franco facing controversy. Of course, Simon memorably defied expectations with the second season of The Wire by largely sidelining many of the show’s most popular creations and focusing on a new set of characters. So who even knows what characters will take center stage when The Deuce returns?

What seems certain is that the series will continue to look fantastic and delve even deeper into this world. Season 1 of The Deuce is a slower burn than most of its contemporaries on TV right now, but it is an excellent watch and highly recommended.