Posted in: Disc Reviews by Jeremy Butler on April 4th, 2018 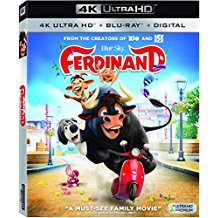 John Cena continues to attempt to branch out from the WWE, this time with an animated film featuring a peace-loving bull in Spain. Granted, John Cena is not first person I envision when I think about nonviolence, but it is an interesting choice nonetheless. Ferdinand tells the story of a bull raised to participate in the matador competitions featured in Spain. Disney continues to buck against the grain, creating a character that contrasts with his circumstances. Naturally, this is an animated film, and being well into adulthood, I am clearly outside the target audience. However, I am fortunate enough to have a daughter who does fit that demographic, so I enlisted her services for this film. Ironically, I actually ended up enjoying the story a lot more than she did. Too be fair to the film, my daughter only possesses a 20-minute attention span. To her credit, she stuck out the entire film, and we can both provide you with the benefit of our experience.

Continuing my earlier statement about the character, Ferdinand (John Cena), unlike the other bulls, does not desire the glory of competing in the matador competition (at this point, the bulls are unaware that they will be killed in the competition). He would much rather spend his time grazing and smelling the flowers. This also contrasts with his size, as he has grown to be a large and intimidating-looking animal, but he remains a gentle giant.

Ferdinand runs away from his breeding ground and eventually finds a place at a farm with a loving family that he grows to love. Under normal circumstances, that would signify the end of our story, and it was also the point where my daughter attempted to get up and leave the room. However, this is a Disney movie, and that would be too easy. Through a series of hilarious circumstances, including a homage to the famed “bull in a china shop” phrase, not only does Ferdinand find himself back in the clutches of matador competition, but he is also chosen to be the matador’s final opponent before returning. With the help of an old goat named Lupe (Kate McKinnon) and three hedgehogs named after Spanish numbers, Ferdinand must find a way to survive the competition and return to the family that he misses so desperately.

So, as I mentioned earlier, I found myself having a deeper connection with the film than my daughter. To be fair, she’s five and has those obvious attention issues. Overall, she did enjoy the story when she fully sat down to appreciate it, especially the dance-off, which got her off her feet and engaging with the screen. If that is not a confirmation of this film’s ability to connect with the younger generation, I don’t know what is. For me, it was about watching this bull that wanted nothing more than to smell the flowers, overcoming the manifest destiny set in front of him. Not to give too much away, but let’s face it, this is a kids’ movie so we all know how it ends.

Witnessing that ending was truly inspiring, as not only did Ferdinand overcome his obstacles, he made history. Further showing that you don’t have to be in the target demographic to be inspired by a film.

Ferdinand also features a well-rounded-out cast that includes comedy veterans Kate McKinnon (Lupe), Anthony Anderson (Bones), and Gabriel Iglesias (Cuarto). I mentioned these three because they were my daughter’s favorite characters, especially Lupe. It shows my kid has sound judgement, because I was very fond of Lupe as well, who served as a loyal presence for Ferdinand to rely on.

Ferdinand is presented in an aspect ratio of 2.40:1. The 2160p image is arrived at with an AVC MPEG-4 at an average of 40 mbps. That’s not really much higher than the Blu-ray. It’s a pretty much average ultra-high-definition image presentation overall. Colors do pop at times, but this is a surprisingly reserved animation project when it comes to colors. A few times you get some nice splashes of red. Black levels are average and can get a little muddy at times. If you’re looking for any reason to go 4K here, it might be that the lighting effects are a bit nicer. There’s even some little touches like camera flare effects that I was able to appreciate here.

Let’s just say that when the bulls’ hooves get to stomping, the DTS-HD Master Audio 7.1 audio track is nice and thunderous, allowing you to fully appreciate the immersive feel. “It’s too loud, daddy.” That’s a direct quote from my daughter, who just so happened to be sitting next to one of our speakers. The soundtrack is mixed well, but the action does overpower the dialog in some areas, like during the bull in china shop chaos. Just keep the volume at a moderate level, and you should be fine.

Ferdinand’s Guide to Healthy Living with John Cena (03:09): This featurette shows John Cena providing some tips how to lead a healthy and good life such as eating right and treating others how we want to be treated.

A Goat’s Guide to Life (03:08): Lupe, everybody’s favorite goat, provides ten tips on how to prepare to be a champion bull. Anybody else find it weird for a bull to be taking advice from a goat?

Ferdinand’s Team Supreme (03:45): Ferdinand introduces you to all his friends and fellow bulls in this featurette. May be beneficial to watch before the movie to familiarize yourself with the cast, but beware of spoilers.

Spain through Ferdinand’s eyes (01:50): A brief educational featurette that gives a quick run-down about the country of Spain.

Confession of a bull-loving horse (03:22): Flula Borg lends his voice to allow majestic horse Hans to express his admiration of our titular character.

Creating the land of Ferdinand (05:49): The animation team breaks down everything that went into creating the world we have just witnessed.

Anatomy of a Scene (04:03): It was one my favorite scene of the movie. In this featurette, the director and producers provide an in-depth perspective of the bulls running through modern-day Madrid.

Lean to Dance with Ferdinand (07:46): My daughter’s favorite featurette; she actually got up and had a dance-off with the screen.

Home Music Video (03:14): Nick Jonas sings his addition to the film’s soundtrack, intercut with scenes from the movie.

Creating a Remarka-Bull Song (03:51): A behind-the-scenes that further address the creation of the song, “Home.”

There is also an art gallery featurette and the film’s theatrical trailer.

Ferdinand is a worthwhile experience that should be shared among the whole family. So pop the popcorn and get to it.

Jeremy Butler is a film school graduate of the International Academy of Design and Technology. He is been writing for Upcomingdiscs since 2012; however, movies have played a big part of his life for much longer. Favorite genres include horror, science fiction/fantasy, and comedy. Favorite movies are V for Vendetta, Boondocks Saints, Kiss Kiss Bang Bang, and The Godfather.
The Sandlot: 25th Anniversary Edition (Blu-ray) Legion Season 1 (Blu-ray)