Posted in: Disc Reviews by Gino Sassani on June 6th, 2018 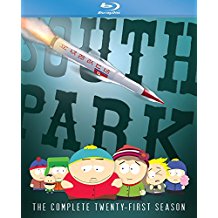 “Look at ’em. Every day people are buying more and more of them Amazon and Google thingies while we just sit here and lose our jobs. It ain’t right. Automated personal assistants and self-driving trucks. Whatever happened to people jobs?”

Not sure machines will ever take over writing good television. With the release of season 21, the one-year experiment South Park had with the year-long story arc has come to an end. I think it’s more than fair to say that the vehicle just doesn’t work on a show that has always flipped off the idea of continuity. Kenny hardly ever dies anymore, but that gimmick was a big riff on the idea of show’s retaining story ideas from one episode to the next. That isn’t to say that elements haven’t been passed on over the years, and this season absolutely keeps many of last year’s arc elements intact. It just doesn’t flow as one long story. South Park is back to the format that we all have known and loved for over 20 years now. If it ain’t broke, don’t fix it, and that goes for you guys, Stone and Parker.

There is one tiny thread that does run through the season, and that’s Cartman’s relationship with Heidi. It doesn’t dominate, but it evolves and eventually resolves itself by the end of the season. This kind of carry-through is fine, because it still allows the individual episodes to work their own independent nature. It also means that I can return to a little South Park review format I like to call The Good, The Bad and The Ugly:

White People Renovating Houses: Sometimes a spoof is actually so spot-on that the exaggerations don’t look quite so exaggerated. Our homes have become overrun by the personal assistants that monitor our conversations in order to allow us to shop and research without much effort. This episode takes it all to a not-so-crazy conclusion. It proves its own point with a little devious trick that Stone and Parker admit was intentional. Watching the show caused Alexa and other devices in the home to be activated by using those activation words over and over again. Leave it to South Park to go this far to prove a point. Cartman, of course, uses the technology in his own devious way, causing a chain reaction of events as one device activates another and so on. There’s a sub-story of people who are put out of work because of the devices but turn out to be unwilling to work as stand-ins. Meanwhile, Randy is running one of those flip-houses shows with a white supremacy tie-in.

Put It Down: Cartman threatens to kill himself if Heidi doesn’t take him back. In true Cartman style, he ends up attempting to create suicide awareness at the same time. He’s obviously looking for attention, you say? No crap. He’s Cartman. The other story involves Tweak. He sends cupcakes to the North Korean government to try to be nice, because he’s getting worked up over the nuclear tension. Of course, in a riff on Trump, Prez Garrison starts tweeting worse and worse taunts and using Tweak as the scapegoat in each so that he actually becomes a North Korean target. The tweets are also causing carnage on the roads, as they are distracting drivers. Clever, but Cartman is what makes this episode gold.

Hummels & Heroin: This is another golden comedy episode of the show. It riffs on the big political opioid war and also finds a clever new angle. Here it’s at a retirement home, where an aged woman runs a druglord operation using Hummels to secure her power over the other residents to participate in her drug operation. It also features a return of Billy’s … I mean Stan’s grandfather. Killer Mike does a rap piece about the operation that is about as funny as this show gets. This goes down in the top ten ever of the show.

Son ‘A Witches: The main plot here’s a little too thin. Randy belongs to an annual witches’ festival that is really just an excuse for drinking. But one of their members is a real witch and is doing horrible things in the community. The group objects to terms like “witch hunt”. Really, the best part of this episode is Cartman trying to talk his friends into killing Heidi for him.

Holiday Special: The politically correct school administration does away with Columbus Day because of the bad rap the explorer is getting. It sends the kids up in arms not to defend Columbus, but because they are losing a free day off from school. Randy takes things too far trying to hide a bit of a Columbus secret in his own past. So he overcompensates and tries to be the anti-Columbus standardbearer.

Doubling Down: Kyle’s attempt to get Heidi to dump Cartman backfires and pushes her closer to him. All the while he’s got a crush on her and has to question his own motives. There’s a Trump connection here that is really thin.

Franchise Prequel: OK. Hasn’t it been Stone & Parker who have made fun of obvious commercial selling out over the years? This episode only exists as a setup for the new South Park game coming out. Nothing more ugly than that.

Moss Piglets: What can be uglier than Heidi starting to look and sound like Cartman? “nuff said.

Super Hard PCness: OK, maybe there is something uglier. It’s an aged Terrance And Phillip trying to make a comeback on a Netflix series. There are some throwbacks to the film, but nothing can make this mess look good.

Stone and Parker are back with their “commentary minis”.

South Park has always been hit-or-miss, but this is a stronger season than we’ve seen in a few years. What has me confused is why all seasons of South Park are not yet available on Blu-ray. “It’s time for us to band together and march in the streets to say we ain’t gonna take it no more.”

Gino Sassani is a member of the Southeastern Film Critic's Association (SEFCA). He is a film and television critic based in Tampa, Florida. He's also the Senior Editor here at Upcomingdiscs. Gino started reviewing films in the early 1990's as a segment of his local television show Focus. He's an award-winning recording artist for Omega Records. Gino is currently working on his 8th album Merchants & Mercenaries. Gino took over Upcomingdiscs Dec 1, 2008. He works out of a home theater he calls The Reel World. Favorite films: The Godfather, The Godfather Part II, The Body Snatcher (Val Lewton film with Karloff and Lugosi, not the pod people film), Unforgiven, Gladiator, The Lion King, Jaws, Son Of Frankenstein, The Good, The Bad And The Ugly, and Monsters, Inc.
A Wrinkle in Time (Blu-ray) RWBY Volume 5 (Blu-Ray)