Posted in: Disc Reviews by Gino Sassani on September 23rd, 2018 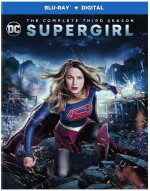 “My name is Kara Zor-El. I’m from Krypton. I’m a refugee on this planet. I was sent to Earth to protect my cousin. But my pod got knocked off course, and by the time I got here, my cousin had already grown up and become… Superman. I hid who I really was until one day when an accident forced me to reveal myself to the world. To most people, I’m a reporter at CatCo Worldwide Media. But in secret, I work with my adoptive sister for the D.E.O. to protect my city from alien life and anyone else that means to cause it harm. I am Supergirl.”

So, you’re asking yourself, who the heck is Kara Zor-El, and what is this D.E.O.? I get it. You’re just not caught up on the CW series Supergirl. It’s not such a good idea to start here, however. You can check out our reviews for the first two seasons here. Catch up on the episodes, and then join the rest of us for Supergirl: The Complete Third Season.

As the season starts, Kara (Benoist) is having trouble dealing with the fact that she had to send Mon-El (Wood) away from Earth so she could poison the atmosphere against an invasion force. Don’t worry. The lead poison only hurt his kind. It’s making her lose focus both at work and as Supergirl, and her friends are starting to notice. She’s thrown herself almost entirely into Supergirl and neglecting Kara. It doesn’t help that the first villain she faces has a psychic ability to project her fears into her brain. But with a little help from her friends, she starts to recover.

Chad Lowe joins the season as a cult leader who was once saved by Kara and now leads a cult that looks on her as a god. He begins a Kryptonian religion based on a Krypton symbol called Rao. His cult ends up awakening a “planet-killer” entity called Reign. Reign is a personality buried in the subconscious of Samantha Arias (Annable). Samantha has a daughter named Ruby (Tremblay) who is the first to suspect something is different about her mom. Samantha is also a business associate of Lena Luthor (McGrath), who has bought CatCo and is now Kara and Jimmy’s (Brooks) boss. Samantha begins to display moments of strength as the Reign personality begins to assert itself. She has blackouts when she goes full-on Reign. This is a villain who has the same powers as Kara, but because she’s a genetic experiment doesn’t have her weaknesses and doesn’t require the yellow sun rays to keep her strength. The Jekyll and Hyde story here is actually a pretty good one, and actress Odette Annable is a strong presence on the season. It’s a rather nice slow-burn villain who takes several episodes to truly develop. She ends up creating a desert version of the Fortress Of Solitude where she is guided in her prophesy destiny.

Of course, there can’t be just one villain. It turns out that Reign is just one of three “planet-killers”, and the Krypton story is pretty much like Earth’s Four Horsemen of the Apocalypse. There are only three here. The other two are Purity, who shoots deadly flames, and Pestilence, who shares a name with one of the Earth horsemen and spreads disease.

There are other smaller “big bads” along the way. One of these is Heroes alum Adrian Pasdar, who plays a business mogul named Morgan Edge, who is in a deadly rivalry with Lena Luthor. While he doesn’t play into the main threat of the season, his character allows us to see more of Lena Luthor’s fight to avoid falling into the evil ways of her family.

The big return of the season is Mon-El. It turns out he’s been 1000 years in the future and has brought some friends back in time to help fight Reign’s partner, Pestilence. His friends are none other than the Legion of Superheroes. That includes an unexpected wife, played by Amy Jackson. She’s Imra Ardeen, better known as Saturn Girl. The team also includes Jesse Rath, who will remain as a regular Brainiac 5. He’s half human and half AI and a 12th power intellect. They’ve come back in time because Pestilence will evolve into an even worse villain named Blight if they can’t stop her in the past. It makes for a more crowded season, but actually a more compelling year. With the extra characters and sub-plots, the season doesn’t appear to contain the amount of filler that is getting too common. There’s enough going on while the big bad theme evolves so that you feel engaged the entire season.

Other subplots involve Kara discovering a colony of Krypton survivors. They will play into the climax of the season in a rather unexpected way. There’s actually a lot of space travel this season, because The Legion brought a spaceship. But they are not the only ship on the planet. When J’onn (Harewood) is alerted to a civil war on Mars, he and Kara go there in his ship to find a powerful weapon. Turns out his ship is made to look like a classic 1950’s convertible Bel Air. On Mars he discovers his father is still alive and held prisoner. That brings us to Carl Lumley, who plays J’onn’s father and returns to Earth for a while. Lumley is a wonderful surprise for me this season. He’s a brilliant actor and brings so much heart to the show and a nice twist on the Martian mythology of the series and comics.

Of course, there is another traditional crossover even across the four shows. I have to offer HUGE kudos to Warner Brothers this year. Every year I have complained that you only got that show’s episode on each set. The problem with that was they didn’t necessarily release the sets in crossover order, and you had to buy all four titles to have the entire story. This year Warner listened to the fans. You get the ENTIRE crossover event, and in the proper order. I can’t emphasize enough how big of a give this is to the fans, who can save money not having to buy the sets they might not want or be able to afford. It’s also the best way to see the event. Whoever made that decision at Warner deserves a big raise and the thanks of the fans of these shows. Good job!

The finale for the season gets a bit too Buffy the Vampire Slayer or Charmed. It ends up with a coven of Kryptonian witches and a lot of interstellar magic. It was my least favorite part of the season, to be sure.

Each episode is presented in its original broadcast aspect ratio of 1.78:1. The 1080p image is arrived at with an AVC MPEG-4 codec. There are six episodes per disc, and that hurts the bit-rate somewhat. There are good production values here, and you get something better than broadcast or streaming, to be sure. Black levels are fair, and the colors do pop on this show in particular.

The Best Of DCTV Comic-Con Panels At San Diego 2017: (58:27) Instead of the usual panels on each release, this is a compilation of all four in one feature. Again I suspect it will be included with the other sets.

The series appears to have finally found its legs in its third year. It’s been the hardest of the CW DC shows to get established. It first aired on CBS and was brought to CW in its second year. There hasn’t been an opportunity to settle into anything before now. This season certainly does that. There is room to grow now, and I’m very excited that the Brainiac 5 character will be remaining on the series. Now that the show has settled into a network and its place in this universe, the characters are free to “go do superhero stuff”.

Gino Sassani is a member of the Southeastern Film Critic's Association (SEFCA). He is a film and television critic based in Tampa, Florida. He's also the Senior Editor here at Upcomingdiscs. Gino started reviewing films in the early 1990's as a segment of his local television show Focus. He's an award-winning recording artist for Omega Records. Gino is currently working on his 8th album Merchants & Mercenaries. Gino took over Upcomingdiscs Dec 1, 2008. He works out of a home theater he calls The Reel World. Favorite films: The Godfather, The Godfather Part II, The Body Snatcher (Val Lewton film with Karloff and Lugosi, not the pod people film), Unforgiven, Gladiator, The Lion King, Jaws, Son Of Frankenstein, The Good, The Bad And The Ugly, and Monsters, Inc.
Ocean’s 8 (UHD Blu-ray) (4K) The House with a Clock in its Walls