Posted in: Disc Reviews by Brent Lorentson on November 11th, 2018 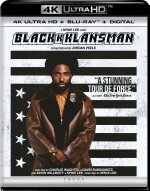 Ever since Do the Right Thing came out in 1989, Spike Lee has been a director that critics and fans have kept an eye on. Over the span of his career he’s done everything from music videos with Michael Jackson, to documentaries, to television shows, but mostly he’s made his claim to fame in film. His films have been all over the place as critical and box office successes. Inside Man to this day may be his biggest success financially, but of all his films it feels the least like a Spike Lee film.  The man has a distinct visual style; most of his films take place in New York, but the typical thing you’ll find in his films is the “black culture” and the topic of race relations.  With his latest film Blackkklansman, Lee ventures into some familiar territory, but for the first time in quite a while he delivers a movie with a strong message but also manages to be entertaining.

It’s the 1970’s when we meet Ron Stallworth (John David Washington). He’s in the middle of an interview to become the first black officer of the Colorado Springs police department. The interview is equally uncomfortable as it is amusing at the same time, and this kind of tone is what plays out over the course of the film.  Let me say from the start this film doesn’t shy away from delivering racial slurs that are pretty much spoken from start to finish of this film.  When Stallworth first gets hired, he’s stuck down in the records room, but it isn’t long before he is asked to help out on an undercover assignment that requires him to infiltrate a gathering where a prominent Black Panther member will be speaking.  This is a scene that is handled really well by Lee as we watch Stallworth listen to the speech; it’s also here where Stallworth meets a potential love interest, Patrice (Laura Harrier) who happens to be a black activist leader.

It doesn’t take long before we see Stallworth is working intelligence, and he decides to reply to an ad in the paper, and it’s what begins his infiltration of the Ku Klux Klan.  It’s here where the spotlight gets turned onto Flip Zimmerman (Adam Driver), who is portraying Stallworth for the meetings with the Klan.  There’s an intense moment where Flip is being questioned by one of the members of the Klan, and they question him heavily about his thoughts about the Jews and his opinion of the Holocaust. It isn’t till later when Stallworth and Flip have a discussion about this that we see how this is affecting Zimmerman’s psyche.  As for the members of the Klan, a good portion of them are portrayed as a group of buffoons that simply like to get together to spout racist opinions and fire off some guns. It’s Walter (Ryan Eggold) who leads their chapter who seems to be the only one that has any brains and seems to have a grip on his rage. To a degree he’s the only one of the bunch that you can possibly garner any sympathy for when he explains where his hate comes from.

When David Duke (Topher Grace) comes into the picture, it’s the phone conversations between Stallworth and Duke that toe the line between cringe-worthy and hilarious.  Grace’s depiction of Duke is a bit startling, because he plays him with such good ol’ boy aloofness that when he’s saying some horribly offensive things it’s hard to stay mad at the character, because you just want to believe a person couldn’t be so ignorant to believe such things.  A conversation occurs where Duke simply explains he can tell if someone were black from the way they speak while he is talking to Stallworth who is *spoiler alert* black.  While these phone conversations are funny at times, we are reminded on the toll it is taking on Stallworth, and while it’s subtle, it manages to be profound.

The sequence that just about steals the film, one that I can see being discussed in film classes for years to come, is a sequence that involves Flip being initiated into the Klan while we are also watching Jerome (Harry Belafonte) reminiscing in great detail of a violent lynching.  This scene only is intensified by the Klan members shouting “white power” and the black activists shouting “black power”.  This is also where we see the members of the Klan proudly sitting together while watching Birth of a Nation.  It’s an unsettling sequence without a doubt.

There are four writers credited for the screenplay, and this is definitely one of those adaptations that will get some attention come award season. John David Washington and Adam Driver put in some great performances here as well, and I hope this is only the start of good things to come for Washington, because like his dad he has the charisma and the acting chops to deliver as a lead performer.

Blackkklansman  is presented in an aspect ratio of 2.40:1. The ultra-high-definition 2160p  image is arrived at by an HEVC codec with an impressive average bitrate of 70-75 mbps. Lee utilized film for this movie, and the 4K truly thrives on native 4K 35mm film. The stock used was processed to have that 70’s feel with the kind of color saturations that era gave us. Colors are warm, accenting the yellows greatly. Lee also provides some rather beautiful establishment shots of the Colorado environments. Here the film takes on a much more neutral temperature that allows you to take in these wonderful vistas. The detail is impressive, as are the incredible black levels.

The Atmos track defaults to a pretty solid 7.1 mix. Of course dialog is the center of the audio presentation. The sound really comes alive in moments where a song is being played from the era. You will find a remarkable new dynamic as the usually sparse audio suddenly comes alive both in the surround speakers and an added bump from the subs. I can’t emphasize enough how huge a difference this is. Dialog comes through fine, which is an important element to the film.

The extra is on both the Blu-ray copy of the film and the UHD. On UHD it’s in 4K but not HDR.

A Spike Lee Joint: (5:09) This is minimal and presented as merely a promotional feature that is made up mostly of a Spike Lee love-fest. You do get a few seconds with the real Ron Stallworth, who wrote the book and on whom the story is based.

Lee has definitely executed one of his most accessible and important films to date, whether it’s juggling the complicated relationship between Ron and Patrice, to covering the various interactions with Stallworth at the police station, and with the Klan there is some powerful stuff here.  Where he loses me is in the film’s final moments where he elects to show us footage from protests that circled around the destruction of Civil War memorials.  It’s as though Lee couldn’t help himself, feeling as though people missed the message of his film, so he injects this footage to incite a reaction.  This frustrates me, because up to this point I feel he delivered an excellent film, filled with haunting imagery at the end of Stallworth’s journey, and he ruined the moment by injecting an over-the-top message.  I’ve been a fan of Spike Lee for years; he’s one of those filmmakers I’ve always admired, but these last five minutes just dissolved from a great film to him getting up on his soapbox.  It’s only five minutes, but it’s so jarring and in your face that it took me out of the film I just watched, and that’s a problem for me.  Still, we get a thought-provoking film that will no doubt evoke strong emotions and hopefully create a discussion, but only time will tell.

Brent Lorentson is a horror writer and film critic based out of Tampa, Florida. With a BA in Digital Film, he co-wrote and co-directed Scavenger Hunt. His short stories have appeared in various horror anthologies. In 2019 his short script Fertile Blood will be a part of the anthology horror film Slumber Party. He is currently working on his first novel A Dark and Secret Place set to be released in late 2019. Favorite Films: Taxi Driver, Fight Club, I Saw the Devil, The Wild Bunch, Dawn of the Dead, A Clockwork Orange, Pulp Fiction, Heathers, The Monster Squad, and High Fidelity.
The Darkest Minds (UHD Blu-ray) (4K) Dr. Seuss The Grinch