Posted in: Disc Reviews by Jeremy Butler on November 11th, 2018 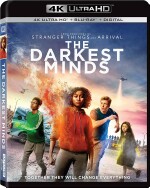 When a disease begins targeting and killing children, you fear for the future of the generation. However, when the children whosurvive develop dangerous abilities, you fear for yourself. That is the situation that Ruby Daly finds herself in. To compound her issues, not only does she have powers that she can’t control, but among the powerful her abilities are among the rarest and strongest. Amandla Stenberg stars in this film based on a young adult novel series. Anyone else sensing a franchise in works. Unfortunately, despite the vacuum let behind by Twilight, Hunger Games (which our star was a part of), and the recently ended Maze Runner, I’m not so sure that The Darkest Minds will be the vehicle to fill the gap. Overall it was a solid opening, but I left the film with more than a few unanswered questions.

Ruby Daly is ten years old when her life changes forever. A disease that targets children ravages the world, killing a large percentage of the world’s children. Those who survive the disease developing abilities varying from enhanced intelligence to mind control. Fearing the threat, the government locks away the children. Ruby is one of those children. Classified by color (Green, Blue, Gold, Red, and Orange, with Orange considered the most dangerous and are to be executed on sight), Ruby is the rarest and considered the most dangerous, so she hides in plain sight and in constant fear until she is freed by a group looking to exploit her abilities. Mistrusting her would-be saviors, she runs away and happens upon a group of children who have escaped a similar circumstance.

Despite being kindred spirits, Ruby keeps her guard up. Or as best she can, as she finds herself drawn to the opposing group’s leader, Liam. They all form an uneasy alliance with the shared goal of reaching a safe haven, run by a legendary Orange. However, life has taught Ruby that nothing is ever what it seems, making her doubt whether this supposed safe haven is really everything that she heard it was.

So it goes without saying that Amandla gives a strong performance and is the biggest asset for this film. I have been a fan of hers dating all the way back to her performance in Colombiana. Since then, I have followed her career closely, and she just gets better with every performance. This is no exception, as a key component of the film is the emotion that she must convey. She is also no stranger to book adaptation, with this being her third (with a fourth to premiere later this year). I have no doubt that if this film becomes a franchise, it will be owed in no small measure to Ms. Stenberg. Her chemistry with her co-star, Harris Dickinson, was above average as well. Dickinson is a compelling everyman and exhibits all the traits of a natural-born leader, but it is his plucky sidekick, Skylan Brooks, who steals the show, providing much needed comic relief.

In regards to my unanswered questions, the biggest is one is in regards to a group that remains shrouded in mystery for the entire film, and there is no real conclusion to what the Children’s League stood for? Why did Liam hate them so much? Additionally, the character of Liam is woefully underdeveloped; a bit more backstory for him would have gone a lot farther to understanding his motivations. Dickinson does a good job working with what he had, but I just would have like to known more about him. I suppose they could be saving it for the next installment in the franchise, but to get to the stage you have to provide a complete story. I’m not sure we got that.

The film did inspire me to look into its source material to determine how closely it followings that path laid out in front of it. I wasn’t able to finish the novel completely, but I’d say for the most part the move stays true to the essence of the original story. There are the obvious Hollywood touches such as the removing of characters and reduction of content, but for the most part, I believe fans of the books will be pleased with the adaptation.

The Darkest Minds is presented in an aspect ratio of 2.39:1. The ultra-high-definition 2160p  image is arrived at by an HEVC codec with an average bitrate of 40-45 mbps. Colors are a vital element of the story here. The various powers are represented in colors from costume to flaring eyes. That makes HDR your friend for this film. The distinctive red, green, blue, orange, and red colors are often quite striking and form the very fabric of the video presentation. Combined with the detail and sharpness of the 4K presentation you also get some rather nice textures. The HDR also demonstrates its superior contrast. There’s a scene at a hotel at night where a black, wet parking lot reflects the colorful road signage. The reflected light is tightly contained in an otherwise inky black and shiny background. The film sports a lot of camera flares. You’d think J.J. Abrams was behind the camera. They certainly offer a bright and laser-like definition. Of course, the digital source is likely a 2K digital master. So you’re not getting complete 4K reproduction here like you would from a 35mm film. Still, it’s a nice chance to check out the capabilities of the HDR.

The Atmos track defaults to a fairly solid 7.1 mix. Certainly there are the large sound f/x that you would expect here, but I was more impressed at how often the film is actually rather quiet. This is where the expanded surrounds show off particularly out in the wild where distant birds and breezes add the kind of nuance that puts you there on the spot. But fear not. There are fiery explosions that will bring the best out of your subs. Dialog stays front and center and clearly audible at all times.

There is an Audio Commentary with director Jennifer Yuh Nelson, Don Levine and Dan Cohn. Nelson is rather quiet and soft-spoken.

Remember- A Look Beyond Ruby and Liam’s Last Kiss: (3:56) You get to see some animatics that Nelson used to get the film green-lit. We’re talking basically animated storyboards set to a song. It’s important to understand in this film that Nelson was an animated feature director, working most notably on the Kung Fu Panda films. This is her first live-action film, and these features demonstrate how she brought those animation and drawing skills to her work here. There’s an optional Audio Commentary with director Jennifer Yuh Nelson, Don Levine, and Dan Cohn. Nelson.

Deleted Scene: (1:28) Yes, there’s only one, and it’s a confrontation between Chub and Ruby. There’s an optional Audio Commentary with director Jennifer Yuh Nelson, Don Levine, and Dan Cohn.

Jennifer Yuh Nelson – Heroine At The Helm: (17:24) This feature is a profile of the director, while cast and crew bring the biggest love-fest I’ve encountered in these things. They’re really testimonials.

There is a series of character profiles:

There are also two promos about filming in Georgia, a production still gallery, and an extended trailer.

The Darkest Minds is clearly marketed for young adult target audience, and those will likely be the ones filling the seats. Though there are many things I did enjoy about the film, I feel that a franchise will likely prove to be out of reach, with a part of that being due to timing. With kids focused on returning to school, I just don’t imagine them flocking to the silver screen for this dystopian sci-fi thriller. Not to mention, it is up against some competition that make the idea of it winning the box office a pipe dream. Which is a same, as if anyone is deserving of a franchise it is Amandla Stenberg.

Jeremy Butler is a film school graduate of the International Academy of Design and Technology. He is been writing for Upcomingdiscs since 2012; however, movies have played a big part of his life for much longer. Favorite genres include horror, science fiction/fantasy, and comedy. Favorite movies are V for Vendetta, Boondocks Saints, Kiss Kiss Bang Bang, and The Godfather.
Can You Ever Forgive Me BlacKkKlansman (UHD Blu-ray) (4K)