Posted in: Disc Reviews by Brent Lorentson on November 15th, 2018 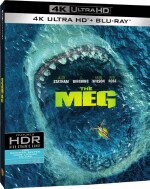 Ever since Jaws splashed onto the screen back in 1975, Hollywood has been attempting to follow its success, and though some films have been valiant efforts, nothing seems to come close to the Spielberg classic.  Sure effects have come a long way over the years, and through the Hollywood magic of special effects they can create a more realistic-looking shark, but to be fair many of the film’s more memorable moments don’t even have the shark on screen.  When I first heard about The Meg, it was going to be in the hands of Eli Roth of Cabin Fever and Hostel fame. This seemed to be like a good pairing that would result in a blood-fest filled with shark carnage that would leave shark fans pleased, but eventually the studio decided to pass, and the project seemed almost dead in the water.  I had known about the film’s struggles to get made for years but hadn’t known that it went back to the 90’s when the rights to the book by Steve Alten had been first purchased.  When the studio signed Jon Turteltaub (National Treasure), it was clear they were aiming to produce a summer tent-pole film, and as my excitement grew, I caved and started reading The Meg series that Alten had published, and I was hooked.  I’ve been looking forward to this film for a while. Could it possibly live up to my expectations? Well, it came close.

The film opens up with Jonas Taylor (Jason Statham) as he is on a deep-sea rescue mission.  While he and the few members of his crew are searching for survivors on a wrecked sub, there seems to be something in the water with them that is attacking the sub.  All we know is that it is something massive, and it forces Taylor to have to make a quick decision that results in several casualties.  It’s years later when a scientific research team is exploring the Mariana trench and is planning to dive deeper than ever before, past a layer that was believed to be frozen.  It’s when the dive team passes beyond this cold layer that we see some beautiful effects as this underwater world we are getting to explore with the team is filled with numerous deep-sea dwellers, though it doesn’t take long before the team is attacked.  Apparently Jonas is the only one available who can possibly save the deep-sea crew; as it just so happens one the crew members turns out to be Taylor’s ex-wife Lori (Jessica McNamee).  This is also the point where it’s discovered Taylor’s claim that the prehistoric megalodon is haunting the deep sea turns out to be true. Why Taylor would make this jump in reasoning from what we saw in the opening scene is beyond me, but I’ve accepted this is a popcorn ride, not something we’re meant to dwell on.

Morris (Rainn Wilson) is the excited owner of the deep-sea facility that has sunk over a billion dollars into the project and is visiting the facility when all these events transpire. Morris seems willing to shake off the mishap with the dive mission once it is discovered that there is a “meg” out there, and he wants to get the team together to hunt down the shark.

Here’s the biggest issue with The Meg: so much happens in the first act, and we’re introduced to everyone in the cast, but there isn’t anything that you could really call character development.  I’m not expecting award-winning writing here, but when the most genuine and fleshed out character is Meiying (Shuya Sophia Cai), an eight-year-old who steals just about all the scenes she’s in, well that’s kind of a problem. By the way, who is looking after this kid? There’s times where she is gone without explanation, then returns with even less explanation.  Then there is the forced love interest between Taylor and Suyin (Bingbing Li), which indeed feels forced considering how fast-paced this film is. How do these characters have time to develop emotions when every other moment they are avoiding becoming shark food?  What’s actually annoying is how little we get to see Taylor and Mac (Cliff Curtis) working together.  In the books Taylor and Mac are a strong duo who are always working together to hunt and kill any and all large nuisance sharks. Well, here we just don’t get that chemistry, and it’s a shame if this is a film looking to become a franchise.  This is genuinely one of those times where I’m scratching my head as to why they just didn’t stick to the book. There would have been plenty more action, suspense, and gore.

OK, so moving on and getting to what matters most, how is the film when we are actually with the shark?  When the film is focused on hunting (or more honestly when the Meg is hunting) the film is popcorn fun, bliss.  Sure, we get several winks and nods to Jaws over the course of the film, but there are some solid jump scares in this film.  There is a great sequence where we get to see Taylor in the water where he’s attempting to tag the shark.  Things get even more nuts when we see a character get into the shark cage to attempt to kill the massive shark.  I love the look of the shark, and when we get to see the carnage it can unleash, well, it certainly is worth catching on the biggest screen you can witness this on.

Without a doubt, if this film rakes in the cash at the box office, we can be sure a The Meg 2 will follow.  Hopefully this time they will follow a little more closely to the source material, because the books are a hell of a good time. Statham shows us he can carry a film as the leading man and can hold his own when squaring off against a giant 75-foot shark.  Considering how we’ve been saturated with superhero films, it’s nice to see a franchise that can possibly bloom here that isn’t filled with giant robots or speeding cars.  While The Meg doesn’t quite give us a reason to avoid going into the water, it’s at least a good reason to return to the theater and enjoy the havoc this prehistoric creature can unleash as the summer draws to a close.

The Meg is presented in an aspect ratio of 2.40:1. The ultra-high-definition 2160p  image is arrived at by an HEVC codec with an impressive average bitrate of 55 mbps. Underwater films really enjoy the advantages of both 4K and HDR. The film’s master was really 2.8K, so much of this is an upconvert, which is true of most digitally-shot films. The shark is often lurking in the shadows and quite camouflaged against the murky water. That’s exactly the intent and adds to the frightening aspects of the film. With the UHD you still get those same shadows and murk, but when the shark comes into focus, you also get a really nice and detailed look at the guy. There are a lot of underwater lights that get to pierce the darkness and murk with so much better and brighter definition without glaring into the space that is intended to remain in shadow. That’s HDR at work in an element just as important as the increased color range. Reds give you the most vivid colors of the film, from a wetsuit to a crane. Black levels are deep with wonderful shadow definition, and it makes all the difference here.

The Atmos track defaults to a pretty lively 7.1 mix. There’s a lot of explosive action here, and it fills the surrounds quite nicely. The subs contribute their delightful depth. But it’s the relative quiet under the sea that delivers some of the impressive attention to detail. It’s so cool when you actually here the nuances of the water and splashes both large and small. Dialog comes through it all just fine. The score never gets in the way, but provides the appropriate rousing moments throughout the film. There’s a nice change-up inside the small subs where the sound collapses just right to deliver the claustrophobic environment of that particular situation. Chopper blades come close enough to make you duck. It’s a pretty immersive audio presentation.

Considering the success the film had and the talk about the scenes that were cut or left unfinished, it’s a shame this is all we get for extras.  Seriously, not even a commentary?

Chomp On This: The Making of The Meg: (12:09) Mostly this is filled with interviews with the cast and crew of The Meg, but what is surprisingly missing are interviews with Jason Statham.  We get some nice BTS footage of some of the films scenes that were shot in open water and in special designed tanks.

Creating The Beast: (10:25)  Here we get a look at all the CGI work that went into creating the monstrous shark.

New Zealand Film Commission: (1:53) A quick plug from the cast and crew discussing how they enjoyed shooting the film in New Zealand.

I went into this film as a fan of the series of books that Steve Alten put out. Though the film distances itself from the books quite a bit, the film is still a fun popcorn ride.  Considering the film’s success at the box office, I’d imagine we’ll be seeing another film or two in the not-too-distant future.  While the film is far from perfect as Jaws rip-offs go, this is one of the better ones that isn’t afraid to show off its CGI effects and remembers to just be fun.

Brent Lorentson is a horror writer and film critic based out of Tampa, Florida. With a BA in Digital Film, he co-wrote and co-directed Scavenger Hunt. His short stories have appeared in various horror anthologies. In 2019 his short script Fertile Blood will be a part of the anthology horror film Slumber Party. He is currently working on his first novel A Dark and Secret Place set to be released in late 2019. Favorite Films: Taxi Driver, Fight Club, I Saw the Devil, The Wild Bunch, Dawn of the Dead, A Clockwork Orange, Pulp Fiction, Heathers, The Monster Squad, and High Fidelity.
Pixar Short Films Collection — Volume 3 (Blu-ray) Vampirina: Ghoul Girls Rock