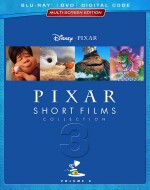 Pixar’s animated films have a staggeringly-high approval rating among both fans and critics. Much of that goodwill extends to the short films that play before each theatrical release (or can be found on subsequent Blu-ray versions). The shorts often compress the warmth, humor, and creativity of the Pixar brand into a neat six- or seven-minute package. For the third time, Disney and Pixar have helpfully packaged a group of short films into a collection that will alternately have you laughing out loud and reaching for a box of tissues.

Pixar Short Films Collection — Volume 3 features 11 previously released Pixar shorts and two all-new mini movies. (These go all the way back to 2012’s Partysaurus Rex.) There is no Play All option, so you have to use the “Short Selection” option from the Main Menu to select the film you want to watch each time. Each short includes an optional introduction with the director talking about his or her inspiration for the film you’re about to see. (I highly recommend you watch the intros before each short film.)

Bao: (7:41) The most recent Pixar short is a touching and odd story about a Chinese woman suffering from empty nest syndrome who forms an unhealthy attachment to…a dumpling. I love the depiction of Chinese culture and I mostly enjoyed the short’s quirky conceit, but things get a little too odd for my taste once our heroine takes extreme measures to hang on to her beloved dumpling. 3.5 out of 5.

Lou: (6:43) An Oscar nominee for Best Animated Short, this is a story about a precocious “Lost and Found” crate named Lou and a schoolyard bully in need of a lesson. The whole thing is sweet enough, but also *very* reminiscent of the sequence in Toy Story where the toys teach Sid a lesson. I absolutely love that scene in Toy Story, but it made this short feel like something I’d seen before…which is not Pixar’s brand. 3 out of 5.

Piper: (6:05) Director Alan Barillaro and composer Adrian Belew win the prize for Best Intro, thanks to their Love Actually-esque use of cue cards. Almost as importantly, Barillaro also won an Oscar for Piper, a cute story about a hungry sandpiper’s first foray into the big bad ocean. Thanks to some stunning photorealistic backgrounds, this might be the most visually stunning short in the bunch. 4 out of 5.

Sanjay’s Super Team: (7:07) Another Oscar nominee for Best Animated Short, this is an action-packed and sneakily touching story about culture clash. An Indian father tries to pass along his culture’s traditions to his son, who is much more interested in the adventures of a (very American) cartoon superteam on television. It’s no major spoiler to say the duo finds a happy medium once Sanjay’s imagination kicks into overdrive. This short is inspired by director Sanjay Patel’s relationship with his dad. 4 out of 5.

Riley’s First Date: (4:40) This amusing Inside Out spinoff short expands on the funny gag from the end of the feature film, which gave us a peek inside the minds of the people around Riley. The comedy here comes from Riley’s dad (who is ruled by Anger) facing off against his daughter’s aloof date, while Riley’s mom tries to use the latest lingo to connect with her. AC/DC’s “Back in Black” plays a key supporting role here. 3.5 out of 5.

Lava: (7:12) My absolute favorite short in this collection is a touching and visually beautiful lava love story about…a lonely volcano. Director James Ford Murphy was very clearly inspired by Israel Kamakawiwo’ole’s ukulele cover of “Over the Rainbow” (which the filmmaker freely admits in his intro). This short represents everything that’s great about Pixar: we get stunning and creative visuals combining with memorable music to create a touching story centered around a completely unexpected hero. 5 out of 5.

The Radiator Springs 500 1/2: (6:12) And we go from my favorite to my least favorite short in the bunch. (To be fair, I’m not much of a Cars guy.) This Western-inspired tale finds Lightning McQueen (Owen Wilson) facing off against a group of hooligans on rough terrain. I know the Cars franchise is especially lucrative for Pixar — and it includes these “Cars Toons” shorts — but Radiator Springs 500 1/2 includes too much of the slapstick humor and shticky punchlines (including actual rimshots) that appeal more to small children. 2.5 out of 5.

Party Central: (5:33) The hopelessly dorky Oozma Kappa fraternity from Monsters University decides to throw a party, with a big assist from a pair of door stations. The party shenanigans are pretty standard stuff, but the best bits involve the monsters inadvertently terrorizing a couple of unwitting parents. It also results in a pretty great punchline at the very end. 3.5 out of 5.

The Blue Umbrella: (6:46) Director Saschka Unseld found inspiration in a broken umbrella on a San Francisco street and his own childhood in rainy Hamburg, Germany. This is another one of Pixar’s patented unconventional love stories: a blue umbrella meets and falls for a lovely red counterpart before the two get separated in a storm. A group of anthropomorphic street signs and objects conspire to get them back together. This excellent short features my favorite score in this collection and combines pleasingly cartoonish character design for the two main umbrellas with startlingly realistic backgrounds. 4.5 out of 5.

The Legend of Mor’du: (6:51) The darkest short in this bunch serves as a strong prequel and companion piece to Brave. The Legend of Mor’du uses great, storybook-style animation to tell the origin story of the feature film’s menacing demon bear. This is such a strong dramatic piece that the goofy prologue and epilogue with the witchy narrator (Julie Walters) feels out of place. 4 out of 5.

Partysaurus Rex: (6:34) Just like both Toy Story sequels so far, this short is way better and much wittier than it has any right to be. Insecure Rex (Wallace Shawn) becomes the life of the party during bath time, where he discovers a whole new group of friends and adopts a new fun-loving identity. Director Mark Walsh combined his love of bath time as a kid with the very real insecurities children feel about fitting in to create this crowd-pleaser. 4 out of 5.

Marine Life Interviews: (2:04) A handful of supporting characters from Finding Dory comment on the feature film’s title character in a series of interview outtakes. Ty Burrell’s beluga whale gets most of the screen time, but this short is too…well, short to really go anywhere. 2.5 out of 5.

Miss Fritter’s Racing Skoool: (2:48) This Cars 3 spinoff also zooms by too quickly to leave a lasting impact, but it at least has a stronger structure to it. The short is a tongue-in-cheek infomercial for the titular racing school and spotlights some of the three-quels key additions. 3 out of 5.

Pixar Short Films Collection: Volume 3 is presented in various widescreen aspect ratios. The 1080p image is arrived at with an AVC MPEG-4 codec at a bitrate that varies with each film but usually settles around low-to-mid 20’s mbps. Not surprisingly, there’s an outrageous amount of fine detail on display in these shorts. (Especially on the photorealistic Piper.) The palette for these shorts is generally very bright but very versatile. There’s plenty of room in this collection for the earthy, resplendent blues and greens of Lava along with the explosions of color that can be found in Sanjay’s Super Team. There are also some inky black levels on display in The Legend of Mor’du, which is both literally and figuratively the darkest short in this collection.

The DTS-HD Master Audio 7.1 track carries a heftier share of the storytelling burden since a lot of these shorts are dialogue-free. That means there’s a greater emphasis on the score, which vacillates between jaunty and sorrowful. The music tends to originate in the front speaker before spreading out to the rears and enveloping the viewer. There’s also pinpoint precision on the way sound effects are deployed, while subs are often used to create both drama (the thunderous, intimidating waves in Piper) and comedy (the thumping beats of Party Central and Partysaurus Rex). This is a wondefully dynamic presentation that even manages to boost the weakest short in this collection: thanks to this track, you can feel Lightning McQueen and his dastardly challengers zoom from one speaker to another in The Radiator Springs 500 1/2.

Filmmaker Commentaries: In addition to filmmaker introductions, each short comes with a commentary track featuring the director and some key crew members. While the intros tend to focus on the inspiration for these films, the commentaries offer more technical detail on the animation process.

Making Bao: (6:02) A peek behind-the-scenes of the latest Pixar short. Director Domee Shi — the first woman to direct a Pixar short — reveals the double-meaning of the word “bao” and talks about her own close relationship with her sweet and protective mother. (There’s also footage of Shi’s mom making dumplings in front of the Pixar crew.)

Caricature — A Horrible Way of Saying “I Love You”: (3:53) Do you ever doodle on a piece of paper during a work meeting? This usually happens when your mind starts drifting, but for Pixar artists drawing caricatures of one another is described as a “close-contact sport.” (Ben Morris — a good-natured assistant editor with bright curly red hair — is a popular target.) This is a cool little featurette that offers a peek at how these artists can capture and amplify someone’s personality with a pencil.

Practically all this stuff is available on previous Blu-ray releases, but this collection is a handy way of getting them all in one spot. The intros and commentary also provide a welcome bit of context and give these talented filmmakers a well-deserved spotlight.