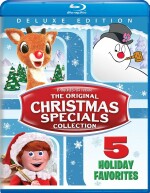 If you were a child in the 1960’s or 1970’s, you were around at the golden age of the Christmas television special. We just celebrated the 50th anniversary of A Charlie Brown Christmas, and there were a ton of holiday charms that came and went each year. But there were a handful that became classics and found their way to the airwaves every year in December. Of course, A Charlie Brown Christmas became one of these, and it is indeed among the best. It was not the only special to become beloved by generations of viewers. Now Dreamworks has brought together seven of the most memorable of these classics. This was a wonderful trip down memory lane for me, as it will be for millions of children of all ages who looked forward to these event broadcasts each and every year. Now you can watch them whenever you want. And they might not be just for Christmas anymore.

If there is a special to rival Peanuts in popularity, it would be Rudolph. The stop-motion animated special first appeared in 1964, a full year before A Charlie Brown Christmas. It became the first and one of the best of these classics. Burl Ives starred as a snowman who told the story of the famous red-nosed reindeer who saved Christmas one foggy Christmas Eve. If you know the song, you pretty much know the story. Rudolph was born with that abnormal glowing honker and was treated rather badly by even Santa himself.

It was more than a Christmas story. It had a strong moral about people who might feel different and isolated from others. The idea was punctuated by an outcast elf who wanted to be a dentist instead of making toys. The theme would also appear on an island where misfit toys live their sad lives because no one will play with them. It’s basically the story of The Ugly Duckling, with the misfit becoming a hero instead of merely beautiful in the end.

Another popular Christmas song served as the inspiration for this Rankin & Bass production. This time they went with the more traditional cell animation and the shorter half-hour format. Again the story pretty much follows the song. Frosty comes alive for Karen and her friends when she uses a washed-up magician’s hat to put the finishing touches on their snowman. He jumps to life shouting “Happy Birthday”. Of course, the magician wants his discarded hat back and plots to steal it from the children even if it means “killing” Frosty.

Another traditional Christmas song provides the story. This one hasn’t been seen quite so consistently as the others. It tells the story of a young orphan boy who has only animals for friends. He’s been taken prisoner and forced to perform while his captor takes the gold he earns. They happen upon the Three Kings following the star to Bethlehem, where he gets to give the performance of his life for the Baby Jesus.

It’s a Rankin & Bass production, but they had a little help this time out. Danny Thomas and Aaron Spelling were also in on the production, with Thomas and his real-life daughter Marlo playing a father and daughter in the voice cast. In fact, this one has a pretty much all-star cast that also included Roddy McDowall and Ed Asner.

The specials are found on four discs. Rudolph, Frosty, and Santa Claus Is Coming To Town each have their own disc. The final two share the last disc.

The Animagic World of Rankin and Bass: (47:00) This is a wonderful special. Many modern animation filmmakers talk about these films and how they came to be. They share the inspiration they had on their careers. It’s a great look at these classic specials. It is also featured on all three of the first discs.

Restoring the Puppets of Rudolph: (3:40) Recently the puppets of both Rudolph and Santa from the 1964 production were found and restored. You get a look at then and now with some of the process to bring them back to their glory.

Reimagining Rudolph In 4D: (10:54) Go behind the scenes of a 2016 short version of Rudolph made for amusement parks around the country as an attraction.

Rudolph The Red-Nosed Reindeer In 4D: (10:51) This is the full short that was used in amusement parks. It was called 4D because it included f/x like smells and snow for the audience.

Gino Sassani is a member of the Southeastern Film Critic's Association (SEFCA). He is a film and television critic based in Tampa, Florida. He's also the Senior Editor here at Upcomingdiscs. Gino started reviewing films in the early 1990's as a segment of his local television show Focus. He's an award-winning recording artist for Omega Records. Gino is currently working on his 8th album Merchants & Mercenaries. Gino took over Upcomingdiscs Dec 1, 2008. He works out of a home theater he calls The Reel World. Favorite films: The Godfather, The Godfather Part II, The Body Snatcher (Val Lewton film with Karloff and Lugosi, not the pod people film), Unforgiven, Gladiator, The Lion King, Jaws, Son Of Frankenstein, The Good, The Bad And The Ugly, and Monsters, Inc.
Fireworks (Blu-Ray) Star Trek: Discovery – Season One (Blu-ray)