Posted in: Disc Reviews by Archive Authors on December 17th, 2018 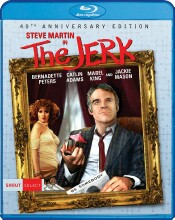 The Jerk, released in 1979, is a rags-to-riches-to-rags comedy film of belated self-discovery. This was Steve Martin’s first starring role in a feature film and was also written by him. It’s hard to watch the film and quite picture Martin as the unknown he really was at the time. Since then Steve Martin has come and pretty much gone from our collective experience. When this film was released, much of this kind of humor was somewhat unique and clever. Today that is not so much the case, and it looks and feels quite a bit dated.

Carl Reiner directs Steve Martin (who co-wrote the script with Carl Gottlieb) in this gag-laden comedy about an idiotic white man, raised by a poor family of black sharecroppers, who doesn’t realize he’s not black. Navin R. Johnson (Steve Martin) is told the horrible truth when he finds himself instinctively tapping his f…et to an easy listening tune on the radio, instead of a low-down blues. His mother (Mabel King) tells him he’s white and Navin takes to the road (in a World War II bomber helmet and goggles) to start a new life in St. Louis. A filling station owner, Harry Hartounian (Jackie Mason), give Navin his first break, hiring him to pump gas. One day at the station, Navin has a brainstorm, concocting an invention called “The Opti-grab,” a combination handle and nose-brace for eyeglasses. But Navin runs into trouble when a crazed killer (M. Emmet Walsh) picks out his name at random from the telephone book and tries to kill him. Navin escapes to a traveling carnival, where he wrangles a job as the “guess-your-weight” man. At the carnival, he discovers his sexual nature, thanks to stunt rider and S&M enthusiast Patty Bernstein (Catlin Adams). But Navin meets the beautiful Marie (Bernadette Peters) and he quickly falls in love. In the meantime, the “Opti-grab” has taken off, and soon Navin is a millionaire.

The Jerk is presented in its original aspect ratio of 1.85:1. The 1080p image is arrived at with an AVC MPEG-4 codec at an average 30-35 mbps. This transfer had good accuracy, but suffered from time to time in this area. In some of the outdoor scenes sometimes greens are vivid, and at other times they are dull. I also noticed a fair amount of film debris in this transfer. The debris is most notable in brighter/outdoor scenes. At times this transfer really delivers, though. In many scenes the actors appear sharp and almost three-dimensional.

The DTS-HD Master Audio 5.1 is what’s on tap here. I felt this film made good use of the center channel and the front lefts and rights; however, it made virtually no use of the surrounds or the LFE. I guess to some extent this is to be expected from a comedy from the 1970’s. I will say however the dialog was very clear and understandable. This is a nice improvement over the DVD of this film but exactly like previous Blu-ray releases.

A Conversation With Co-Writers Carl Gottlieb and Michael Elias: (26:35) The two writers look back on their experience writing the film and being around during the shoot.  There are a lot of clips edited into the interview piece.

An Conversation With Steve Martin & Carl Reiner: (26:35) The two are much more conversational here, so you get more personal moments. It’s actually interesting when their memories don’t quite agree or match up. It gives the piece an unrehearsed or scripted feel.

You get the trailer and the short film piece that has been included since the DVD release.

I loved this movie, just not really the restoration of the print and audio. Story-wise I would put it in my top 10 favorite comedies ever. The video was very inconsistent, and the sound was not used anywhere near to its full potential. Also some decent extras could have helped as well. However, if you are a fan of this film and feel let down by the DVD version, I can confidently recommend this upgrade. If you already have the Blu-ray, I’m not sure if the addition of the interviews will put it over the top for you.