Posted in: Disc Reviews by Gino Sassani on December 17th, 2018 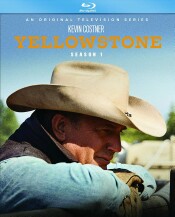 “There’s no such thing as luck, but I sure as hell believe in stupid.”

We’re a visual people, and so most of you will recognize Taylor Sheridan from his role as a chief of police in Sons of Anarchy when the controlled puppet regime had finally left the scene. It’s not a remarkable role, and it’s not a complete surprise that Sheridan found his calling more recently behind the camera. As a writer his first script did hit it out of the park. Sicario is an awesome film populated with compelling and interesting characters who thrived on a broken system. That theme appears to have stuck with him, because the first season of Yellowstone appears to take us back in time to the days of open frontiers and cattle barons who struggled to keep their land amid lawless communities and raiding parties of American Indians who were portrayed as savage beasts who kill women and children in the middle of the night to become to shadows of nightmares and the stories told to keep children in line. These themes are all there, but it takes place in a modern 2018 setting that does indeed make for an interesting new twist on an old idea. This is the dawning of the modern western where lands still stretch for miles and are still owned by a single family. It’s Bonanza in the 21st century, and Kevin Costner thought enough of the idea to star in this television drama series for The Paramount Network.

Kevin Costner plays John Dutton. The name itself recalls those years as a kid watching the myriad western shows that crossed our television screens throughout the 50’s and 60’s. He’s the owner of Yellowstone Ranch, which takes up hundreds of square miles and borders on the National Park of the same name, which we never do get to see. What we do see are the other borders of the Yellowstone. It borders a large and mostly impoverished Native American reservation. The ranch has apparently existed with an uneasy peace with the residents of the reservation. But there is a new chief in town. He’s Thomas Rainwater, played by Gil Birmingham. Rainwater has some kind of a grudge that we don’t get to completely understand in this first season. He’s a political beast who has turned Dutton and his ranch into a common enemy to fuel his own popularity and ambition. When a fence “mysteriously” disappears and hundreds of Dutton’s cattle cross into reservation land, he claims the cattle as his own and is prepared to go to war to keep them. And war is exactly what happens.

All of this takes place in the open ranges of Montana where the Yellowstone Ranch looks very much like the fabled Shiloh of The Virginian. There’s the big mansion where Dutton and some of his family live and the bunkhouse where the cowboys who work the cattle sleep, play cards, eat, and fight. Looking over the scenery, one can almost imagine you were back in the days of the untamed frontier. That is until the helicopter swoops into view. John Dutton might have some old-fashioned ideas of how to make a living, but he’s a rich man who uses modern technology when it serves him. The ranch helicopter is the one concession to the modern age. He watches from the air during cattle drives and branding activities. As John Dutton looks down on his workers and their duties, there’s certainly at least a splash of symbolism to be found here.

Dutton considers himself a kind of god here. He rules the ranch with a brutal and iron fist. Being fired from Yellowstone isn’t quite like leaving a job at the mall. There’s also a caste system much like that found in the early days of the Mafia. Dutton believes that people who have reached the bottom of their lives will be loyal if he becomes their savior. He recruits these “lost” souls into his ranch and its inner circle. But there is a price to be paid to join this elite group. You are branded with the same iron that is used on the cattle. That brand means no one else can touch you, and you’re a part of the ranch family for life. It’s like being made in the mob. Rip, played by Cole Hauser, is one of those lost souls that Dutton “saved” as a child. Now he’s his right-hand man and has grown fiercely loyal to the ranch. He’s not above breaking the law to do what it takes for the ranch.

Dutton is a widower who lost his wife to an accident when his kids were still very young. His children are now grown and have their own kind of lives, but they are never completely out of the family business. These are the characters that bring the real drama to Yellowstone, where it becomes more like Dallas than Bonanza. There’s a lot of stubbornness in his children, and it poses more of a challenge for Dutton than the local reservation trying to steal his cattle and provoke a war.

Kelly Reilly is Beth Dutton and the only girl in the family. She is a corporate raider by profession but has left her job at a firm to return to the ranch where her father is more than willing to take advantage of her cutthroat instincts.

Kayce Dutton is played by Luke Grimes and is one of the more compelling characters in the series. He has become the black sheep of the family who didn’t want any part of the family business and like Michael Corleone finds himself dragged into the conflict. He lives on the reservation with his Native-American wife and their son. He’s been in the military fighting in the Middle East where he feels compelled to return to provide for his family in the shadow of his family name. But he’s better off not going. This is one of the unluckiest characters on television. In just eight episodes he finds more trouble than any one man should endure in a lifetime and most of it by accident. He happens to be near the border when the fight between the reservation and ranch turns violent, and he watches his brother being killed and retaliates violently. (Remember Michael Corleone.) He happens along another road when a meth lab explodes just as he’s passing by, and he ends up having to shoot the guy from the lab who is slowly burning to death with help an hour away. Again he happens to be driving along when a couple of guys are attacking and attempting to rape a young girl. Once again he ends up killing someone because he and they were in the wrong place doing the wrong thing at the wrong time. Don’t go driving with this guy. You might as well put on a red Federation shirt and be done with it. He’s visiting a friend’s family on the reservation when the mother shoots herself in the head because she can’t care for the children. It’s another bloody mess he helps to clean up. Luke Grimes plays him perfectly. There’s a growing rage inside of this guy, and Grimes gives it to us in measured doses without taking him over the top.

Son Jamie is played by Wes Bentley. He’s a lawyer who has been representing the ranch in court while Dad uses rather extralegal means to get things done. He’s been doing this to use his family money and prestige to run for office. He decides to run for Attorney General against his father’s wishes while putting the ranch second. That doesn’t work out for him very well. It doesn’t help that his father is sleeping with the Governor, played by Simon Baker’s co-star from The Guardian, Wendy Moniz-Grillo.

Truth to be told, there really isn’t a “good guy” on the show. They all might have once had admirable motivations for who they are and what they do, but those days are long past. The biggest bad guy of them all is the charismatic Danny Huston as Dan Jenkins, who is also out to destroy Dutton. For a while he tries teaming with Chief Rainwater to attempt to force Dutton from his property, but no one is playing by any rules here, and this might as well be the old west, because it’s certainly still the wild west.

Each episode is presented in its original broadcast aspect ratio of 1.78:1. The 1080p image is arrived at with an AVC MPEG-4 codec. This is a beautifully shot series. The open ranges look quite impressive in this high-definition image presentation. There’s absolutely a movie quality that pretty much all shows claim to have but truly exists here. There’s a lot of texture to be found in the horses and dirty clothes of the cowboys. Colors are rather bright and realistic. Flesh tones are pretty much reference, and I can’t help thinking what this might look like in 4K. Black levels are also nice. Paramount doesn’t load the discs up with too many episodes, so you get respectable bit rates and no compression issues. This is the kind of thing that looks so much better on disc than it ever could through a video stream.

The Dolby Digital TruHD 5.1 track is a bit odd. Few discs are using this format anymore. It’s a nice mix. Not particularly aggressive, but it has its moments, particularly when the helicopter is being used. Otherwise this is a very dialog-driven show, and there’s some nice sub leaking into the dialog so that there’s some depth and authority there. The music is mostly subdued. In one episode they used music from Unforgiven, which was quickly identified by this fan of that film.

Behind The Story: Each episode as a 3-4 minute behind-the-scenes feature that looks at that particular episode. There is plenty of cast and crew interview clips as well as too many clips from the episode you just watched.

There is also a collection of seven features with a total running time of 48:07. There’s a play-all option, but 90% of this stuff was already in the smaller features.

I kind of like the idea of a modern western, and this one has just enough elements of those classic shows and films to rise above the dynastic prime-time soap operas like Dallas. Costner has never been one of my favorite actors, but there isn’t a lot demanded from him here. He can play the quiet heavy, and it works both for him and the character. I’m certainly interested in where the story goes from here. I think that Sheridan is on to something here that can evolve into something special. He doesn’t have the television cred yet. “He doesn’t, but he will.”

Gino Sassani is a member of the Southeastern Film Critic's Association (SEFCA). He is a film and television critic based in Tampa, Florida. He's also the Senior Editor here at Upcomingdiscs. Gino started reviewing films in the early 1990's as a segment of his local television show Focus. He's an award-winning recording artist for Omega Records. Gino is currently working on his 8th album Merchants & Mercenaries. Gino took over Upcomingdiscs Dec 1, 2008. He works out of a home theater he calls The Reel World. Favorite films: The Godfather, The Godfather Part II, The Body Snatcher (Val Lewton film with Karloff and Lugosi, not the pod people film), Unforgiven, Gladiator, The Lion King, Jaws, Son Of Frankenstein, The Good, The Bad And The Ugly, and Monsters, Inc.
Instinct: Season One The Orville: Season 1