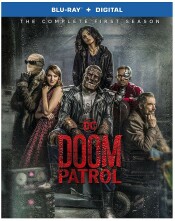 When it comes to the DC universe on television, I feel like Warner Bros. knows exactly what they are doing and truly understands the comics as well as their audience. Ever since they launched their streaming service they’ve been putting out new material that is arguably upping the stakes, knowing that soon Disney will be putting out there new streaming service in a matter of weeks.  I was impressed with Season 1 of Titans. I loved how it was a show targeting a more mature audience, but it was Doom Patrol I wasn’t so sure about.  All I had known about the Doom Patrol was from their one episode in Titans, and from what I saw, I really enjoyed the possibilities.  Well, now that I’ve seen all 15 episodes of Season 1, I can honestly say What the F***?, followed by that was certainly a unique experience.

You think you’ve seen some weird and off-the-beaten-path shows? Well, Doom Patrol is without a doubt the most fun, unique show I’ve seen.  This makes Twin Peaks seem normal, and really, calling the show bonkers is putting it lightly.  Oh, and for those of you with young kids, you definitely may want to steer them clear of this show until you’ve seen what it offers.  From talking cockroaches, town swallowing donkeys, asses with feet that can eat you, and talking streets, that is just a tiny glimpse at the oddball fun this show has in store for its audiences, and seriously, I haven’t even gotten to some of the more absurd aspects of the show.  But please don’t let this scare you off, because this motley crew of misfit superheroes are a hell of a good time to watch, and even more surprising is how lovable they all are.

The Doom Patrol is made up of Cliff (Brendan Fraser), a generic robot with the brain of a former race car driver, Rita Farr (April Bowlby), a former Hollywood starlet who after a freak accident can turn into a giant blob of flesh, Larry Trainor (Matt Bomer), a former pilot who after an accident became possessed by a force of radioactive energy, and then Crazy Jane (Diane Guerrero), who is filled with over 60 personalities who each have their own superpower.  They all live together in a mansion that somewhat looks like the Xavier school for the gifted from X-Men, but rather than a Professor X looking after them, it is the mysterious Niles Caulder (Timothy Dalton).  Really, at first glance this show is almost a DC version of X-Men mashed up with Guardians of the Galaxy, but really, that doesn’t do the show justice, because it really does become its own unique voice.

It’s when Niles is taken by an archnemesis known as Mr. Nobody (Alan Tudyk) that the gang has to work together and leave the safety of the mansion to find Niles.  Each episode takes us on little journeys where we meet a variety of new and interesting characters while also going to some crazy places.  There is Paraguay, where a Nazi scientist has a lab that can turn anyone into a superhuman for the right price … They also can travel through time, as we see in another episode they are pulled into the 50’s… and in one of my personal favorite episodes, we even travel into Jane’s mind, where we see her encountering several of her personalities.  Really, this show doesn’t play by traditional rules, and just when you think you have it figured out, they throw something new at you.

Another character we meet, one who is more familiar to mainstream audiences, is Cyborg (Joivan Wade), who hasn’t quite made it onto the Justice League yet and is helping the Doom Patrol out with finding Niles.  What works with the numerous characters that come and go over the course of the season is the amount of depth each character is given and that they do work in helping develop all of the characters.  It’s when Cyborg and Larry take their search for Danny to “the street”, we get the obvious message of the story.  Danny is not just a talking street; it’s a sanctuary for the weird and unaccepted of society.  Quite literally we see a military agent find Danny, and the next time we see him he’s MC’ing a cabaret for cross-dressers.  This is where we also see Danny attempt to coax Larry out of the closet while Cyborg also seeks acceptance with himself.  This is a message that stretches over the course of the whole season. Sure, it’s a little heavy-handed at times, but for today’s times it’s to be expected, and for some it’s long overdue.

Where the show falters a bit is towards the end of the season, beyond breaking the fourth wall, when the show attempts to wrap up the story, it just doesn’t feel right.  Certain characters seem to just vanish with no real closure, while the “final fight” simply seems so over-the-top and insane, we don’t get closure with these heroes that we’ve watched slowly come together to fight as a team.  Then there are points in the series where it seemed more focused on making a WTF moment rather than delivering on something more meaningful.  For instance, we see Cliff travel to Florida to finally see his daughter who he thought was dead, but we get cheated with a copout moment … Oh, and Cliff wrestling an alligator (would have been awesome to witness) – nope, we only get minor details.  Is this a story they’re saving for another season?  I can only hope, because there is a solid story there that will only add more depth to Cliff.

I’m surprised WB took a chance and gave this 15 episodes. I feel it could have been stronger as 10-12, but honestly, I’m happy to spend time with these misfit characters.

“I think I flexed the wrong muscle.”

The Doom Patrol is presented in the aspect ratio 2.20:1.  The 1080p image is arrived at with an AVC MPEG-4 codec at an average of 18 mbps.  Because of all the wild imagery and the use of digital and practical FX, it’s impressive how good this looks on disc.  There are episodes with entirely white backgrounds, from an assortment of bright colors to dark and shadowy realms, and all of it comes through with plenty of detail.  There are times when the reds seem to pixillate a bit, but it’s nothing distracting.  Even when the FX are clearly overly digital, it kind of works with this show, because everything is so over-the-top.

The DTS-HD Master Audio 5.1 track is very well balanced between the heavy dialog moments and the over-the-top action sequences.  What’s even impressive is how they balance Larry’s dialog that is muffled with the bandages but remains clear. The low bass from the score by Clint Mansell sounds great here as well.

Deleted Scenes: (15 minutes) There are 14 scenes all together, nothing that really changes anything we see in the show, understandably they were cut for pacing reasons.

Gag Reel: (4:35) I think the most amusing part of this reel is that the cursing is bleeped out. Considering how much cursing is in the show, this just seemed funny to me.

Come to Georgia PSA: (5:06) Members of the crew discuss filming in Georgia and how it suited all their cinematic needs.

With there being so many superhero shows and movies out there, Doom Patrol is something fresh that shakes up the genre in all the right ways.  I had a blast with this show, but I know there are people who will hate it for it just being so unapologetically weird, and that’s ok. Hopefully this gets a Season 2; I’d like to see where these characters will go and how they will continue to develop.

Brent Lorentson is a horror writer and film critic based out of Tampa, Florida. With a BA in Digital Film, he co-wrote and co-directed Scavenger Hunt. His short stories have appeared in various horror anthologies. In 2019 his short script Fertile Blood will be a part of the anthology horror film Slumber Party. He is currently working on his first novel A Dark and Secret Place set to be released in late 2019. Favorite Films: Taxi Driver, Fight Club, I Saw the Devil, The Wild Bunch, Dawn of the Dead, A Clockwork Orange, Pulp Fiction, Heathers, The Monster Squad, and High Fidelity.
“31 Nights Of Terror” The Addams Family/Addams Family Values 2 Movie Collection “31 Nights Of Terror” Diabolik DVD: Demented Discs From The World Over