Posted in: Disc Reviews by Brent Lorentson on February 19th, 2020 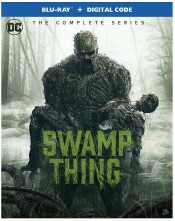 It only took Warner Brothers five days to pull the plug on this series after it debuted the first episode on their streaming service.  This was crushing news for fans who had been looking forward to the series that had seemed to be a promising adaptation of the comic material and bringing it to life. I was one of those fans.  I’m a fan of Swamp Thing, even the cheesy Wes Craven film from back in the early 80’s to the short lived series in the early 90’s.  It’s a character that has struggled to find life and longevity over the years, mostly because the finances and the technology were never really there to make it as good as it could be, but when James Wan came along with his lofty idea to bring this series to life and keep it true to the comics and keep it geared to adults, well, I had hope.  Already the Warner Brothers/ DC Universe streaming service has delivered with their iterations of Titans and Doom Patrol, and if Swamp Thing was to follow in their footsteps, then this was going to be a show to get excited about.  Now that I’ve seen Season 1 and all the plot threads that had been set up to extend the series for future seasons, all I can think is that the cancellation of this series is an undeserved gut punch to fans of the comic and those that will watch this first season, because it builds something that could have been so great but will not be brought to fruition.

Was the first episode “bad”?  Could it be the reason for the shows swift demise?  Not at all; in fact, when it comes to first episodes, this is an awesome fun ride that is helmed by  Len Wiseman (Underworld).  One of the first things that stood out about the show is how striking it looked, not in the sense of being bright and filled with color, but instead it’s with the muddy, foggy look of the swamp that instantly visually sets a tone for the show. The show was uniquely shot in Cinemascope (basically that means its width is about twice as wide as its height), so this helps in creating a sense of atmosphere and depth to the locations and just allows for this world to seem almost bigger than life.  The opening sequence has us witness a trio of men on a boat suffer a vicious attack from what appears to be the plant life of the swamp that has come to life.  My only slight complaint is that the blood looks too CGI, but with the exception of that gripe, I dug what the show had to offer right out the gate.

As for the actual plot of the story, the CDC has been called in to Marais, Louisiana after an illness seems to be killing the townsfolk. Abby Arcane (Crystal Reed) is leading the charge to help find the source of the illness, though she’s not quite happy to be returning to the small town where she grew up.  It’s at the hospital she meets Alec Holland (Andy Bean), a biologist who has been studying the swamp and believes there may be something in the water that is the cause for the illness. It’s when Alec goes exploring into the swamp to find answers that he disappears, and Abby stumbles upon something more horrifying.   As for the town of Marais, it’s under the thumb of a small-town business tycoon Avery Sunderland (Will Patton), who along with his wife, Maria Sunderland (Virginia Madsen) seem to enjoy blackmailing and manipulating those who get in the way of what they want, so obviously Sunderland is somehow involved with the dirty deeds going on in the swamp, but how?

OK, so the relationship between Abby and Alec works well, and this is important that we see it working well and fast because, well, we know that Alec isn’t going to be the handsome scientist for long and eventually is going to be covered in plant life.  As for when Alec becomes the “Swamp Thing”, the role is then played by Dereck Mears, and  when it comes to iconic performances, Mears is “Swamp Thing”.  His presence on screen is a huge part of what makes this show work, and it’s not just a guy lumbering around a swamp. There are some nice emotional bits where Mears manages to convey more than you’d expect beneath the makeup and through his actions.  And then there are the fight sequences. Damn, it is a shame we don’t get more, but seeing him take on other “monsters” and eventually a platoon of soldiers and more, wow, this show delivers on the action, though I’d have to admit some of the strongest material is in the final three episodes of the show.

But then there is more to this show.  There is Doctor Jason Woodrue (Kevin Durand), who is brought in by Avery to find out what is happening in the swamp.  Watching the evolution of this character is pretty awesome as we see him evolve from the cowering scientist that is taking care of his ill wife to becoming something borderline evil.  Durand kills it in this role and somewhat reminds me of a younger Christopher Walken at times, but what he does with the role is something we don’t see enough of in comic book shows or films where we can still empathize with a character where the intentions may be noble, but the actions are sinister.  Then there is Ian Ziering, who I have to admit I wasn’t entirely excited to see in the cast lineup. What he brings to the show is a little bit meta but becomes one of the biggest crimes about this shows premature cancellation.  Ziering is playing Daniel Cassidy, basically a B-rate celebrity who seems to have missed his chance at his big break in Hollywood but can’t seem to escape from the town of Marais.  All I’ll say is there is a cool supernatural aspect to this character and also develops into another cool layer to this show.

If there’s a complaint that I can have with this show, it is that there are so many plot lines that are set up in this season that we will never get a satisfying conclusion to.  It’s not the fault of any of the creative minds behind the show; after all, they were simply planting seeds for future seasons, but it’s still frustrating to be teased with so much cool material and knowing there will be no payoff to it.

From its monster-of-the-week appeal along with some solid character and world building material, Swamp Thing is the show that brought something fresh to the packed superhero, comic book adaptation genre.  Horror fans really got screwed on this one, because it seems like we finally had a show that could cater to our wants and needs, and it was taken away.  If the show had sucked, it wouldn’t be such a big deal, but the tragedy is that this show was good and had the potential to be something great.  Hopefully Warner Brothers and DC will figure out a way to keep this show alive and it’s really not just another dead project.

Swamp Thing is presented in the aspect ratio 2.20:1.  The 1080p image is arrived at with an AVC MPEG-4 codec at and averages from 18-32mbps.  Because the show is low lit and at night a majority of the time, seeing it in the highest definition is almost required to be able to appreciate many of the details that were put into the set and creature designs.  The night footage and black levels are impressive here as we get plenty of texture and depth.  As for the interiors and day shots, they may be slightly washed out. Really, colors don’t necessarily pop in this show, but it does have a nice robust color palette.  One of the fun details, for instance, is in the video store where you not only see the posters with ease but are also able to read many of the VHS boxes.  Now, the CGI blood looks a little off; it doesn’t ever quite match with the night shots, but it is fine.  Then there are the Blue Devil effects that look great, so it balances out.

The DTS HD-Master Audio 5.1 track is really nice, everything from the ambiance of the swamp with the bugs and water to the bass kicking in for the fights as well as the swelling score that plays throughout; this is a well done mix.  The dialog is clear and clean, but that’s to be expected.

I took my time with this one, mostly because I knew this may be the only chance I’d get to see these characters come together with the level of talent behind it.  Sure, this is a show you can binge in a couple of days, but there is so much here in this show to take in and appreciate that again it is a shame its run was cut short.  From the numerous appearances of characters from the comics, to the awesome appearance of Adrienne Barbeau, this is simply the best adaptation of Swamp Thing that we may ever get.  Hopefully something will occur that can give fans at least one more season, and seriously, even after the last episode, watch through the final credits for a tease of what could have been.

Brent Lorentson is a horror writer and film critic based out of Tampa, Florida. With a BA in Digital Film, he co-wrote and co-directed Scavenger Hunt. His short stories have appeared in various horror anthologies. In 2019 his short script Fertile Blood will be a part of the anthology horror film Slumber Party. He is currently working on his first novel A Dark and Secret Place set to be released in late 2019. Favorite Films: Taxi Driver, Fight Club, I Saw the Devil, The Wild Bunch, Dawn of the Dead, A Clockwork Orange, Pulp Fiction, Heathers, The Monster Squad, and High Fidelity.
Donten: Laughing Under the Clouds – Gaiden: 3-Film Collection (Blu-Ray) The Twilight Zone (2019): Season One (Blu-ray)