Posted in: Disc Reviews by Gino Sassani on September 16th, 2020 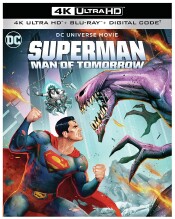 He’s pretty much the oldest of the comic book superheroes still fighting for truth, justice and the American way. Sure, Superman has changed quite a bit over the years. From the black and white George Reeves television series and the early 1940’s cartoons to several film versions over the years, Superman has been an American icon since the 1930’s. With the series of DC animated features, we have seen many of the modern incarnations of the Man of Steel. But this time Warner Brothers and DC took a step back from their ambitious ongoing stories to give fans a little bit of nostalgia and a look back to some of the earliest days of Superman. It has quickly become one of my favorite of this series, and I think you’re in for a treat. This one is for the fan who is still a kid, if not in body, then in heart. And while the story might be somewhat “old school”, you get to take advantage of the best of 21st century technology at the same time as Warner Brothers delivers Superman: Man Of Tomorrow on UHD in 4K.

We see Clark Kent as a young boy watching an old sci-fi film with a friend on television. The youngster shrinks from the depiction of the horrible and dangerous alien in which his friend takes delight. It’s one more reminder that he is an alien and in many ways on his own. We jump forward in time, and Clark (Criss) is about to leave Smallville for the very first time to take an entry-level position at the Daily Planet. There’s no Superman suit, just the ambition to make his mark in the world as plain old Clark Kent. There he discovers that his duties are more like getting coffee than getting the latest scoop. This is in many ways an origin story, but there’s no need to go all the way back to the destruction of Krypton and his arrival on Earth as a baby. This story picks up at just the right jumping-in point for fans and the uninitiated both.

He takes to the sky for the first time when Lex Luthor (Quinto) launches a rocket that goes astray. Dressed in a kind of sweat suit and goggles, he takes to the sky to stop the disaster. It’s the first time anyone has seen him in action, and, of course, young reporter Lois Lane (Daddario) jumps on the scoop and quickly assigns him the name Superman. Questions abound, and she’s determined to find out all she can about the new hero. So while many things have changed over the years, it’s refreshing to see that some things remain constant no matter how many decades have gone by.

Superman gets his second chance to go into action with the arrival of interstellar, space-bike-riding, bounty hunter Lobo (Hurst). Lobo is chock full of information about who Clark really is. Information he wasn’t yet aware of. Lobo identifies him as a Kryptonian and claims there is a rather substantial bounty on his head. Of course, Lobo is in for a few surprises. He’s not aware of the effect Earth’s yellow sun has on the alien and rather unprepared for his ability to fly along with the various other super powers he possesses here. So both characters are in for a period of enlightenment. But it all goes too far when Lobo produces a ring of kryptonite, unaware of just how powerful the material is against his foe. Superman is about to lose his first battle when he is suddenly rescued by another alien living in secret here on Earth. Jonn Jonnz, also known as the Martian Manhunter, comes to the aid of the nearly-defeated Superman. It all looks like a swift conclusion until one of the bounty hunter’s errant weapons infects a janitor and turns him into a power-sucking parasite that eventually grows to huge proportions and threatens Metropolis while stealing Superman’s powers. With our heroes nearly helpless it’s up to … Lex Luthor to save the day? That’s right, folks. Lex pitches in to defeat the giant purple Godzilla lookalike.

In the end the good guys win just like they almost always do. Lex might have helped, but we know that he has his reasons. Getting a lot of information on the new hero in town will come in handy down the road. And let’s face it, Lex can’t take over a world if it’s already destroyed by a monster. So let’s not pat ol’ Lex on the back just yet.

The film gives us a bit of the emotional development of Superman over his power development, and that suits me just fine. This is one of the first times outside of the actual comics where we truly see how it feels to be such an outsider. Clark is learning, but he’s also feeling here. The introduction of the Martian Manhunter is a perfect choice here because he meets someone very much like himself, both in abilities and also being the last of their kind. Jonnz will be a good mentor for Clark, and we get to see the early stages of that relationship. Lobo is a fine villain because he offers an over-the-top character that brings some of the heavy emotional stuff a little down to earth. He’s the comedy relief more than anything else, and it all works rather well in the end. The running time just flies by faster than a speeding bullet. I don’t know if Warner Brothers has plans to take this particular angle forward or leave it as its own little time capsule in the life of their premier superhero. I’d like to see it come forward a little.

The voice cast deviates from the regular cast who have been voicing these characters for most of the animated series of feature films. That was a good choice. We needed to feel we were meeting Clark and Lois for the first time, and too much familiarity would have intruded on the atmosphere of all of that. Zachary Quinto has become quite a favorite actor of mine. From the terrifying villain on Heroes to the beloved character of Spock on Star Trek, he has proven himself quite the force of nature. Here he has to rely on his voice alone, but it really brings out the nuances in Lex Luthor. This isn’t the all-out evil guy we will meet later. But much like Smallville’s version of Lex, this is a guy who could still go either way. Quinto brings out those characteristics wonderfully. All of these elements combine to deliver one of the more enjoyable animated features to come from DC and Warner Brothers.

Superman: Man Of Tomorrow is presented in an aspect ratio of 1.78:1.  The ultra-high-definition 2160p  image is arrived at by an HEVC codec with an impressive average bitrate of 70+ mbps. Animated films often leave plenty of chances for the HDR to show off what it can do in this format. This film is no exception. The colors are bright and vivid, particularly at the end when Clark gets his traditional Superman costume. Such a wonderful contrast to the black outfit we first see him use. The colorful costumes show off all of these primary colors in a way the comics could never have provided. The green of Martian Manhunter and purple of the parasite sport outstanding colors and sharply defined boundaries in the artwork. You get wonderfully deep black levels that show off during the scenes that exist in outer space. HDR also delivers wonderful contrast with planets or stars against this deep black canvas. Superman learns about the healing powers of the sun, and it places him suspended in that blackness against the tight brightness of the sun.

The Atmos track defaults to a pretty solid 7.1 mix. The animated features return to the Atmos tracks, and it is gratefully appreciated. The dialog cuts through all of the powerful explosions and images. The score gives us, at times, an almost theatrical dynamic that demonstrates that these films are not mere cartoons but are taken seriously by all involved. Subs offer nice nuance and support the entire audio presentation.

Lobo – A Natural Force Of Chaos: (10:23) This is a character profile that goes all the way back to the various interpretations in the comics and a few somewhat campy television depiction.

Martian Manhunter – The Lost And Found: (8:47) Another character profile very much in the same style. There’s more connection to comics and pop culture in general to be found here. Nice to see David Harewood’s portrayal from Supergirl included here. He’s the best version of the character to date.

There are three “sneak” peeks here, but two of them are for films already released.

You get two episodes of Superman: The Animated Series. It’s the two-parter The Main Man.

These animated features can go places and do things that the television shows and the theatrical films simply can’t. Warner has done a pretty stellar job with these. In my opinion it’s a sharp contrast to the mess they’ve made of the theatrical releases with the very notable exception of Wonder Woman. It’s been my job to watch and review all three depictions of the DC universe, and I think I’ve made those distinctions pretty clear. “I don’t want to brag, but it’s kind of my specialty.”

Gino Sassani is a member of the Southeastern Film Critic's Association (SEFCA). He is a film and television critic based in Tampa, Florida. He's also the Senior Editor here at Upcomingdiscs. Gino started reviewing films in the early 1990's as a segment of his local television show Focus. He's an award-winning recording artist for Omega Records. Gino is currently working on his 8th album Merchants & Mercenaries. Gino took over Upcomingdiscs Dec 1, 2008. He works out of a home theater he calls The Reel World. Favorite films: The Godfather, The Godfather Part II, The Body Snatcher (Val Lewton film with Karloff and Lugosi, not the pod people film), Unforgiven, Gladiator, The Lion King, Jaws, Son Of Frankenstein, The Good, The Bad And The Ugly, and Monsters, Inc.
Stephen King 5-Movie Collection (Blu-ray) Magnum P.I.: Season Two