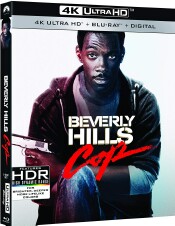 From the bouncing opening music by Glenn Fry to the final frame of Eddie Murphy’s smile, Beverly Hills Cop has established itself as a classic. Now finally out on Blu-ray, the film shows us all over again why we fell in love with it almost 20 years ago. Murphy hasn’t been as funny since, but we’ll always have Beverly Hills and Axel Foley.

The movie had a complicated history, and it’s a kind of miracle that the version we know ever happened at all. The movie was originally conceived as a straight action film with the plan to have either Al Pacino or Clint Eastwood in the title role. At that point the script was called Beverly Drive. When they couldn’t get Al or Clint, they turned to Sylvester Stallone, and Sly took the role. He took the script and rewrote it to fit his own particular style. The main character’s name went from Axel Foley to Cabretti so that he could be called The Cobra. The problem with Sly’s version is that the cost was rising higher than the execs at Paramount were willing to put out. Sly was offered another film to drop Beverly Hills Cop. He took his rewrites with him, and they eventually formed the nucleus of his movie Cobra. The rest of the film had already been cast, so imagine their surprise when the action movie they thought they were making with Rocky turned into a comedy/drama starring the Saturday Night Live but unproven box office comedian Eddie Murphy.

The result changed the face of the cop movie forever. With Beverly Hills Cop, the comic buddy cop film was born, and imitations follow to this very day. This was when Eddie Murphy was still hungry. Axel Foley is filled with drive and energy and loaded with charm. Murphy ended up adlibbing a lot of the material, but in those days he was a generous actor and was known for being very good at setting up his co-stars with great material to go with. He didn’t feel the need to steal every scene; the truth is he didn’t have to. The camera loved him then, and he was a natural. It didn’t help that the supporting cast here was also very good. Ronny Cox doesn’t do much comedy, but his straight-man Lt. Bogomil is priceless and a wonderful deadpan for the rest of the cast. Judge Reinhold and John Ashton had wonderful chemistry as the Beverly Hills detectives Rosewood and Taggert respectively. Neither performer has been in a better movie or had better roles before or since. Unfortunately Lisa Eilbacher never had a chance to do much since this movie and didn’t even get to do any of the sequels. Her part is considered a bit rigid by most critics. It’s easy to understand. When Sly was involved, she was the big love interest. The new version left her very little to do. Who can forget Bronson Pinchot’s cameo as the odd art museum assistant, Serge? Steven Berkoff played the main villain, something he knew a little about. He was known for his incredible portrayal of the main bad guy Orlov in the James Bond sleeper Octopussy. Finally, give director Martin Brest a standing ovation for complimenting his cast with Gilbert R. Hall as Axel’s boss, Inspector Todd. While scouting police stations in Detroit, Brest found this particular actor working as a genuine detective in the Detroit police department. He’s quite a catch and adds a great dose of authenticity in his few scenes with Murphy. The film didn’t give him a switch to movies, however. He only did the three Beverly Hills Cop movies, but he did use his bit of fame to become a Detroit councilman and even ran for the office of mayor of Detroit.

Of course, we all remember the energetic music of the movie. It’s become part of what I remembered most, I discovered as I was exploring the movie again for the first time in a decade or so. The pounding beat of the Axel Foley theme brought back the old Hollywood tradition of giving the main character a particular them. It is very effective here. Not since the Pink Panther films has a character been so identified by a simple musical theme. Okay, there was a certain big fish in the 70’s, but that’s not quite the same thing, is it?

Beverly Hills Cop is presented in its original aspect ratio of 1.85:1. The ultra-high-definition image presentation is arrived at with an HEVC codec at an average of nearly 60 mbps. It’s a dated film with a dated video style, but Paramount really pulled out all of the stops, it seems to me. The high bit rate alone is a wonderful testament to the sincerity of the studio here. This is about as good a high-definition image presentation as we are likely to see in a film of this age. The picture is just as bright as I remembered it from the theater. Colors show the contrast between the drab and dark Detroit scenes and the shiny gloss of Beverly Hills. Black levels are very good and reveal wonderful shadow definition. I think I saw some evidence of DNR work, but the original grain appears to be primarily intact.

The DTS-HD Master Audio 5.1 is just as bright and bouncy as the image presentation. Subs work well to deliver a dynamic range particularly with the music. Dialog sounds just great. Of course, it’s all very heavy in the main speakers with little surround action, but that’s the film we all saw back in 1984. But it’s no upgrade from the Blu-ray. Wish there had been an Atmos track here.

There is an informative commentary by Martin Brest. He’s a bit microphone-shy, and there’s a bit of dead air. He also laughs quite a bit at Murphy.

The extras on the UHD are all older items which includes 1984 interviews and mis of the music along with the deleted scenes.

The extras on the Blu-ray are all standard definition and ported over from the special edition Blu-ray and DVD’s.

The Phenomenon Begins: (29:11) Cast and crew remember the film with various anecdotes and fond reminiscences. This is great if you want to get the background on the film’s complicated history.

A Glimpse Inside The Casting Process: (9:33) They talk about the Stallone incarnation, and most of the cast talk about how they found their way to the film.

The Music: (7:49) Crew and cast continue their look back, focusing on the music here.

Location Map: This is an interactive map that provides a few 1-2 minute features.

The sequels never did measure up, but that’s OK. Paramount has really brightened our day and our ultra-high-definition collections with the overdue release of Beverly Hills Cop on UHD Blu-ray. Watching this movie again is like a much-needed vacation for this reviewer. The good news is that it will remain a part of my collection. I guess you might call it “the longest vacation you ever heard of”.

Gino Sassani is a member of the Southeastern Film Critic's Association (SEFCA). He is a film and television critic based in Tampa, Florida. He's also the Senior Editor here at Upcomingdiscs. Gino started reviewing films in the early 1990's as a segment of his local television show Focus. He's an award-winning recording artist for Omega Records. Gino is currently working on his 8th album Merchants & Mercenaries. Gino took over Upcomingdiscs Dec 1, 2008. He works out of a home theater he calls The Reel World. Favorite films: The Godfather, The Godfather Part II, The Body Snatcher (Val Lewton film with Karloff and Lugosi, not the pod people film), Unforgiven, Gladiator, The Lion King, Jaws, Son Of Frankenstein, The Good, The Bad And The Ugly, and Monsters, Inc.
Paramount Presents: Trading Places (Blu-ray) Coming to America (UHD Blu-ray) (4K) (Steelbook)