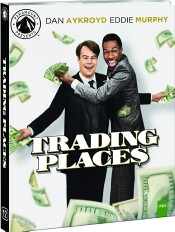 Trading Places was originally written as a vehicle for Gene Wilder and Richard Pryor. That team had had great success with a few films already, and it was felt they were the only ones capable of pulling off this kind of a film. I’m not sure how that might have worked. Certainly it still might have been a funny outing, but somehow I think everything worked out for the best. Trading Places broke many conventions of the time. The black and white stereotypes were a concern, as were other elements. Having a hooker play such a pivotal role was questioned. The studio even expressed some problems with the fate of Mr. Beaks. A little gorilla love went a long way toward the poetic justice these kinds of villains often require. John Landis stood his ground the entire time, refusing to budge. Remove any of these elements, and who knows what we might have ended up with.

Winthorpe (Aykroyd) is a wealthy man from a prestigious family. He has a well-paying job at the Duke & Duke Commodity Brokerage. He’s engaged to the niece of his two bosses. He lives the life of luxury, and it has made him the perfect snob. All the while, Billy Ray Valentine (Murphy) lives from scam to scam on the cold streets of Philadelphia. It’s an understatement to say he’s not feeling any of that brotherly love. The Dukes (Bellamy/Ameche) have an argument over the age old question of what makes the man, genetics or environment. To settle their $1 bet, they decide to frame and ruin the life of Winthorpe and invite Billy Ray to step into his shoes. Winthorpe befriends a hooker (Curtis) paid to drive away his fiancee. Billy Ray begins to develop a sense of responsibility and thrives in his new position, until he overhears the Dukes and learns of the bet. He teams up with Winthorpe and company to get even with the Dukes. When you tell it that way, it all seems so ordinary. Watch the film, and you’ll be surprised at just how extraordinary ordinary can get.

Trading Places is presented in its theatrical aspect ratio of 1.85:1. It’s not likely you would guess this was a nearly 25-year-old film. Colors are fantastic and close to reference. Detail is what impressed me the most. It was striking for a comedy this old on Blu-ray. I saw small nuances in this print I never saw on my old DVD Looking Good Edition or in the theatre. Aykroyd’s drunk Santa was a perfect example. When he’s eating the fish, and half his beard, on the bus you’ll see every hair on that salmon. Someone dedicated a great amount of care to provide this print.

The Dolby Digital 5.1 track is not near as impressive as the video. Still, it does a more than adequate job given the material. There aren’t any explosions or rumbling engines to fuel an aggressive mix. Mostly all we have is dialog, and it comes through just fine. There are some noticeable improvements in places like the train sequence where rear channels provide a little more width to the film. I think the music might have been mixed a touch too loud, particularly in the film’s hilarious opening shots. A little extra flair. It’s all nice and clean and every bit as immersive as you get from these kinds of films.

The only new extra is a short Filmmaker Focus piece with Director John Landis and a fold-out mini film poster.

Insider Trading: The Making of Trading Places: (18:28) This is a collection of current-day interviews and archive footage with the cast and crew. Both share their memories of making this picture and how it impacted their careers and their lives, a good watch for fans of the movie.

Trading Stories: (7:58) Archive footage from 1983. The cast are interviewed about who they would trade places with if they could, or if they were put into the same situations as their characters. Surprisingly pretty interesting to watch and has a few laughs.

Dressing the Part: (6:31) A look into the costumes of the characters, ranging from rich to poor. The costume design is showcased.

The Trade in Trading Places: (5:24) An in-depth look on the exchange floor in the New York Stock Exchange. An interesting look into the hectic world of stock trading.

The Duke Brothers were conducting a scientific experiment of sorts. Back when the DVD was released, I decided to sit down with a couple of friends, and we conducted an experiment of our own. Could a 25-year-old film for which we each had great memories, we wondered, still be as funny today? We meticulously assembled the essential equipment. Cola? Check. Chips and crackers? Check. Comfortable seats? Check. We needed to conduct our experiment under controlled conditions in a controlled environment. The Reel World had been constructed for just such cases. The walls were carefully plied to make them sound neutral. The back seats were raised on a platform which also served to work with the subwoofer to vibrate the room. We used nothing but state of the art equipment. And so on Tuesday night at approximately 8:00 P.M. we conducted the experiment. Our findings? (and it holds up even better now in Blu-ray): “Looking good. Feeling good!”

Gino Sassani is a member of the Southeastern Film Critic's Association (SEFCA). He is a film and television critic based in Tampa, Florida. He's also the Senior Editor here at Upcomingdiscs. Gino started reviewing films in the early 1990's as a segment of his local television show Focus. He's an award-winning recording artist for Omega Records. Gino is currently working on his 8th album Merchants & Mercenaries. Gino took over Upcomingdiscs Dec 1, 2008. He works out of a home theater he calls The Reel World. Favorite films: The Godfather, The Godfather Part II, The Body Snatcher (Val Lewton film with Karloff and Lugosi, not the pod people film), Unforgiven, Gladiator, The Lion King, Jaws, Son Of Frankenstein, The Good, The Bad And The Ugly, and Monsters, Inc.
Westworld: Season 3: The New World (UHD Blu-ray) (4K) Beverly Hills Cop (UHD Blu-ray) (4K)