Posted in: Disc Reviews by Gino Sassani on November 21st, 2020 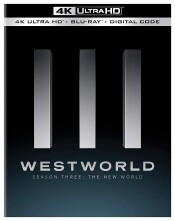 “Things are about to get dangerous.”

Keep your hands and feet inside the ride vehicle at all times. At some point in his life, Michael Crichton must have had a really bad experience at Disney World. Maybe he got stuck on a ride, or a ghost followed him home from the Haunted Mansion. Whatever his reasons, the man sure had it in for the amusement park industry. He’s created two iconic franchises from the “way out” amusement park idea. His novel Jurassic Park incited all of our imaginations, not the least of which was Steven Spielberg’s. That amusement park brought back living and breathing dinosaurs who would entertain park attendees, that is when they weren’t eating said attendees. But long before that came his screenplay for the 1973 film starring Yul Brenner and James Brolin called Westworld. It was another future amusement park. This time androids were created to serve out an attendee’s darkest fantasies. It was a kind of Fantasy Island meets The Stepford Wives. You could go to Westworld and live out your wild west fantasy. You can shoot it out with outlaws or become an outlaw yourself. You could kill at random and be perfectly safe from the carefully programmed androids that populated this version of the wild west. Of course, just like Jurassic Park, things go wrong. The androids begin to rebel, and the vacationers become the hunted. Three years later came a sequel with Yul Brenner returning along with Peter Fonda in Futureworld. It’s been over 40 years, but Westworld has come back, and it’s come back big. HBO has now completed three seasons of the series, and things keep getting better.

The first two seasons of the show pretty much introduced us to the park and the people who run it as well as the androids who run around within its boundaries. Ed Harris leads a rather large and talented cast. He plays one of the wealthy investors who created the park and also one of its best clients. He takes a month each year to truly submerge himself in the wild west environments. He meets Delores, played by Evan Rachel Wood, who becomes aware of who and what she is. By the end of the second season she leads a massacre of humans, particularly the park’s board of directors, and when that season ended, everything was in tatters. Android designer Bernard Lowe (Wright) discovers that’s he’s one of the androids himself. There’s a lot leading up to this awesome climax, and you can read all about the first two seasons and meet all of the wonderful characters who populated the first two years. And yes. You’re going to want to catch up before you even think about picking up the third season. But it’s going to be well worth the investment of time and sheckles to get yourself ready, because Warner Brothers has released Season 3 on UHD Blu-ray in incredible 4K, and you’ll want to be able to hit the ground running. Bang it here for our reviews of the first two seasons: Westworld Seasons 1 and 2 reviews

The first two seasons of Westworld kept the action pretty much within the park and behind the scenes where the androids are created, programmed, and repaired. Get ready for a brand new production design as the series takes us out into the human world of 30 years from now. Delores is now in the real world, and she has revenge on her mind. She sets out to get back at the rich folks who paid to rape and kill her over the years. As she is fulfilling her own fantasy in man’s world, she makes a rather chilling discovery. The first two seasons spent a lot of time in exploring the idea of free will and what really makes us human. Now the show turns that question on its ears as it applies to flesh-and-blood people. Serac (Cassel) and his brother have created something they call Rheoboam. It’s a giant sphere that runs a special algorithm. The software takes all of the trivial information that makes up our lives from our texts, internet browsing, phone calls, and all of the many digital trails we leave behind. It then makes predictions that are “intended” to allow people to live the best life catered for them. It projects futures, and the population of the world end up judged on these projections.

Enter Caleb played by Breaking Bad’s Aaron Paul. He’s a construction worker with a mentally institutionalized mother. He tries to better himself by looking for some kind of job or career, but what he doesn’t know is that the algorithm has projected that in a decade or so he’ll end up killing himself, so no one is willing to invest any resources in him. He has to resort to crime, these days organized on a nice little phone app called RICO. He’s caught in a rut without really understanding any of it. That is, until his path crosses that of Delores. She’s taken by him and sees him as the future of a human race she originally wanted to merely destroy. He changes her mission, and she changes his life.

On the other side Maeve (Newton) stumbles upon a new part of the park called Warworld. Here guests engage in a WWII scenario where they have to smuggle vital Nazi plans out of occupied Italy in the 1940’s. But she’s learning and eventually discovers Delores’s original mission and attempts to stop her. Meanwhile Bernard (Wright) has been attempting to fit in in the human world, but he feels compelled to return to the park looking for answers. They are all looking for a key believed to be in Delores’s mind that will reunite Maeve with her family. Meanwhile a new android version of Hale (Thompson) is discovering feelings for the real Hale’s family. Throw in some nice corporate raiding and a fight for control of Westworld’s parent company Delos, and you have a lot of action and story packed into just eight episodes.

I think the most exciting thing about the third season is the future world designs. Jonathan Nolan and his crew have found a way to make this future unique but still quite recognizable. The craft owe a little of their design to John Cameron’s aircraft, and there’s certainly an aspect of Blade Runner here even if Nolan attempts to deny the influence. It’s not near as stylistic and much more functional, but the movement toward upper levels of life are a dead giveaway, even if it’s without the tacky giant billboards. Both are based pretty much on Singapore where most of the skyline was taken for the original photography. The third season of Westworld takes us into the non-park world, and that world certainly complements and now informs the simulated world of the park and the android creations. Like Blade Runner, there’s beginning to be that area of gray that separates humans from androids. It’s a nice change of pace in direction that I’m eager to see develop more.

Each episode of Westworld is presented in its original broadcast aspect ratio of 1.78:1. When the world is inside a simulation it breaks out into a 2.35:1 aspect ratio. The ultra-high-definition 2160p  image is arrived at by an HEVC codec with an average bitrate of 45 mbps. The extra you get in 4K has to most pronounced in the wonderful location vistas. You get a nicer sense of depth and richness in the beautiful mesas and landscapes. Another aspect enhanced in the ultra-high-definition presentation has to be the show’s wonderful textures. From costumes to the dirt and grit environments, there is a rather immersive quality that is made possible through the use of film instead of digital source material. One of the most impressive contrast moments can be found in a scene where the Delores character is shown partially finished. The wonderful flesh tones stand out in stark contrast to the dark, mechanical aspects of her makeup.

The Dolby Atmos presentation defaults to a 7.1 track. The extra speakers do not provide a lot more than the 5.1 track. What you end up with here is mostly a little more depth to the subtle end of the surround presentation. Score elements are enhanced, and the realism of the space in which the action plays out is heightened. I love the music of this series, and it comes through in crystal clarity. The theme is awesome, and many of the show’s cues are just as nice. There’s a wonderful violin solo version of David Bowie’s Space Oddity that will knock your socks off. (So now you know where they went). Subs deliver a fullness that truly brings these vehicles and new cityscape environments to life. Dialog always cuts through cleanly, and this is one of the best television audio presentations you’re going to get.

The extras are on both the Blu-ray and UHD discs.

Creating Westworld’s Reality: These are 6-9 minute features that are episode-specific and found for almost all of the episodes.

Escape From Westworld: (1:53) This is pretty much a teaser trailer for the third season and sets up the main points.

Exploring Warworld: (3:06) I wish we could have spent more time there and saw much more of it. This feature takes you behind the scenes and on location in Spain for that new park element.

Westworld Live In Technology: (13:44) Cast and crew draw some parallels between the data mining going on today and the Insight program of the series.

Westworld On Location: (11:20) The show went to Spain, Singapore, and L.A. to shoot the third season. Hop along and travel with the cast and crew.

There are also a series of amusing light interview segments to finish off the season’s extras.

I’m always pleased when I see television make this jump to 4K. Broadcast stuff has a long way to go, but Nolan, like his brother, uses film, and it makes such a start difference on these discs. If you watch the show through streaming you’re going to be blown away when you see what it looks like with the superior bitrate ability of the UHD release. Just kick back in your home theatre and enjoy the ride and… “I’ll see you on the dark side of the moon.”

Gino Sassani is a member of the Southeastern Film Critic's Association (SEFCA). He is a film and television critic based in Tampa, Florida. He's also the Senior Editor here at Upcomingdiscs. Gino started reviewing films in the early 1990's as a segment of his local television show Focus. He's an award-winning recording artist for Omega Records. Gino is currently working on his 8th album Merchants & Mercenaries. Gino took over Upcomingdiscs Dec 1, 2008. He works out of a home theater he calls The Reel World. Favorite films: The Godfather, The Godfather Part II, The Body Snatcher (Val Lewton film with Karloff and Lugosi, not the pod people film), Unforgiven, Gladiator, The Lion King, Jaws, Son Of Frankenstein, The Good, The Bad And The Ugly, and Monsters, Inc.
It’s a Wonderful Life (Blu-ray UHD) (4K) Steelbook Paramount Presents: Trading Places (Blu-ray)