Posted in: Disc Reviews by Gino Sassani on March 9th, 2021 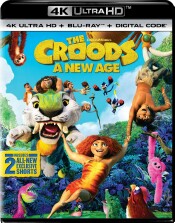 They say that timing is everything. When Dreamworks released The Croods back in 2013, it performed rather nicely both at the box office and on home video. The combined take brought the studio over a billion dollars and a bit of a comeback for their animated studio branch. It appeared to be the anchor for a new franchise that could hold its own against such juggernauts as Ice Age, Shrek, and pretty much anything Pixar puts out. I expected there to be a follow-up, but I didn’t expect it to take over seven years. Kids have relatively short attention spans, and sequels really need to strike while the box-office iron is hot. That wasn’t the case here. I’m not sure what the holdup might have been. The project was quickly greenlit by Dreamworks, and we should have seen something in a couple of years at the longest. Instead it took the better part of a decade, and the film faced a double whammy when it finally was ready for release. Of course, no one could have predicted the last year with its closed-down theatres and worldwide panic. The film just didn’t have a chance to bring in anything close to what the original took. Now it’s out on home video, which hasn’t been hit quite so hard by the pandemic. It’s a chance for the franchise to find some legs and allow for the chance that there will be more.

The film finds the Guy (Reynolds) pretty much becoming a part of the Croods’ family. It’s a bit of an irritation to patriarch Grug (Cage), who doesn’t appreciate that his daughter Eep (Stone) has become quite close to the newcomer, and fears the family will fall apart if the two youngsters decide to leave and venture off on their own. It’s pretty much the same emotion most modern fathers get when the boys start to show interest in their daughters, and worse yet, when their daughters start showing an interest in the guys. That’s the dynamic within the family when they come upon a huge obstacle in their path in the form of a gate, the likes of which they have not encountered before. A series of pratfalls finds the family inside what was believed to be an impregnable barrier where another family resides in a world that is paradise. There is plenty of food and water. There are no dangerous animals trying to eat them, and this land of milk and honey appears to extend out forever. And in control of this new world are the Bettermans. Phil (Dinklage) is the father and patriarch here. Hope (Mann) is the mother, and there’s teen daughter Dawn (Tran). The Croods are mesmerized by their massive treehouse and abundant resources. Of course Grug feels threatened by it all. He sees his family tempted by this new life and sees the family traditions lost forever. Instead of sleeping in a giant pile, they have their own bedrooms. It appears the Bettermans have it all, but there’s one Eden-like taboo. You can’t eat any of the plentiful bananas. Just the kind of restriction that Grug is going to rebel against. So he eats ALL of the bananas and is told later that they appease a terrifying creature that leaves them in peace in exchange for the fruit. Yes, it’s King Kong being told here, and with predictable results. The story leads to a moral of family, and for Grug, the ability to let go, at least a little bit.

There are enough adult references here to satisfy the grownups. There’s the obvious biblical origin story of the forbidden fruit going on that most of the kids won’t quite understand. The King Kong bit is obvious enough for anyone to understand. But there are a ton of complicated emotions and relationships at work here that are not really geared towards the kids. Parents will find some hard lessons here that they already know if they have teens in their own clans.

There’s a lot to love here, and the writers did a good job of making te Croods be the fish-out-of-water representations here, but I find the Bettermans a little over-the- top. It suggests a giant leap forward in evolution in a single generation, or it indicates the Croods were the out-of-time family all along. I’m not sure which of these possibilities I dislike more, but it takes me out of this family’s story more than a bit. But the meeting is pure gold when it comes to story material here. There’s so much potential here that one film couldn’t possibly tell it all or touch on the elements that the scenario provides. So I’m left a little split on the film in the end. I guess I would have liked to see another story of the family’s survival in their own world with this kind of thing as a franchise finale, which I don’t believe will be the case. It certainly wasn’t the intent when the film began production. Of course, the plot allows for a nice expansion of characters, and that was likely something this franchise rather desperately needed.

The Croods: A New Age is presented in its original aspect ratio of 2.35:1. The ultra-high-definition 2160p  image is arrived at by an HEVC codec with an impressive average bitrate of 85-90 mbps. This is about as close to a perfect ultra-high-definition image presentation as you’re going to find. It doesn’t hurt that it’s a digital creation and can take advantage of the tools that this 4K and HDR presentations can deliver. Colors are the most remarkable and most obvious results. These are rich, vibrant colors that just splash across the screen with the help of superior contrast. This one will bring out the best in your monitor. It’s a show-off disc. It gives you the kind of vivid experiences the store demo recordings often provide. Black levels are deep and pure.  And it’s not just the colors. The image has a razor sharpness that I just haven’t seen before even with Pixar’s incredible presentations. Textures allow for some photo-realistic images that go beyond that. It kind of reminds me of the day when comic books went from the 4-color printing to the computer-generated pages that just brought the art to a different level. That’s what happened here. We tossed those crude pages for something entirely different, and it’s amazing.

The Atmos track defaults to a pretty solid 7.1 mix. The surround is aggressive here, but not in an overwhelming nature. Some action films just saturate your ears with loudness that sometimes fittingly submerges you into the chaos. Here the audio presentation is full but often subtle. The score delivers the emotional punches, to be sure, but there are tons of ambient sounds that surround you without assaulting you. That’s a truly immersive presentation. Dialog punches through it all and is always perfectly placed. The subs add just the right amount of depth and physicality to the sound to keep you constantly engaged, and that’s honestly the best way to describe this audio presentation. It keeps you constantly engaged.

The extras are all on both copies of the film.

Deleted Scenes: (23:03) There are eight scenes with a handy play-all option. There’s an intro to each by director Joel Crawford. They are not finished product, but rather animated storyboards.

There are two animated shorts: To Gerald (7:32) is an incredibly emotional silent story about a magician and a young girl. and Dear Diary (2:54) A story taken from the film’s characters.

The Croods Family Album: (8:24) The voice cast talk about their characters, and you get to join them for a few recording sessions.

The Evolution Of The Croods: (10:17) Cast and crew talk about working on the franchise. There’s a lot with the new folks and plenty about the story and what it means to each of them.

How To Draw Caveman Style: (29:05) An artist shows you step-by-step instructions for drawing eight of the characters with a play-all option.

Famileaf Album: (2:58) An arts-and-crafts primer on creating a primitive leaf album to represent your family.

The Croods has room to grow, and it’s a solid franchise that has run up against some pretty unfortunate circumstances. I’m fully convinced that Dreamworks waited too long. It would have hit the characters during the peak of their popularity and offered better box office odds. The choice now will be a hard one. It’s not fair to judge box office here, so what will happen going forward? I hope the answer is, “It’s just the beginning.”

Gino Sassani is a member of the Southeastern Film Critic's Association (SEFCA). He is a film and television critic based in Tampa, Florida. He's also the Senior Editor here at Upcomingdiscs. Gino started reviewing films in the early 1990's as a segment of his local television show Focus. He's an award-winning recording artist for Omega Records. Gino is currently working on his 8th album Merchants & Mercenaries. Gino took over Upcomingdiscs Dec 1, 2008. He works out of a home theater he calls The Reel World. Favorite films: The Godfather, The Godfather Part II, The Body Snatcher (Val Lewton film with Karloff and Lugosi, not the pod people film), Unforgiven, Gladiator, The Lion King, Jaws, Son Of Frankenstein, The Good, The Bad And The Ugly, and Monsters, Inc.
Do the Right Thing (UHD Blu-ray) (4K) Breakdown (Blu-Ray)