Posted in: Disc Reviews by Jeremy Butler on November 25th, 2021 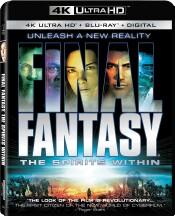 This was actually the first movie I ever saw on a date. Nearly twenty years ago. The most interesting thing being that I can tell all sorts of things about that experience, but for the life of me, I can’t tell you a thing about the movie. Prior to re-watching it, that is, and having done so, I now understand why it faded from memory, because it isn’t a movie that really makes a lasting impression. This is surprising given that the film is credited as the first photorealistic computer animated film, as well the most expensive video-game inspired film up until 2010. The thing is, it’s a film that if you ask me, never really should have been. The story is not compelling, and it does not accurately depict the source material by which it was inspired. They share the same name, but none of the characters or the plot of the film originated from the video game franchise. Talk about a bait and switch.

I will preface this by saying that I am not an authority on the popular video game franchise. However, based on my own experience, when you think of Final Fantasy, you think about Cloud Strife, the blonde warrior carrying a sword with a blade the size of a tree trunk. Or at least I do. In contrast to characters established in canon and the video game series, the film follows Dr. Aki Ross, a woman attempting to gather eight spirits in order to invigorate the Earth’s Gaia Spirit following a alien invasion. Lost yet? Don’t worry, you are not alone. I don’t know where they pulled this story line from, but it did not play well with me, as for me, it in no way represented what the game series was about, which explains why I purged it from memory.

On the positive side, the realistic CGI depiction was masterfully done, in my opinion. Even now, I’d say that it held up quite well twenty years later. I can’t say I’m all that surprised given what they spent to accomplish it, the equivalent of over 180 million dollars in today’s market. That has to hurt when the film only grosses 85 million at the box office. Needless to say, the film has a bit of a stigma, especially given that it is considered to be the reason for the demise of Square Pictures, the company that created it.

I think a large chunk of my issues with the film is the lifelessness of the story. For one, there isn’t a great setup. The audience is just sort of dropped into the thick of it. Now, if the film’s plot had any semblance of the game’s plot, this might have worked, but if you are going to go off script, setting the film up properly should have been crucial. I would have settled for an opening narration that explained things up front. We do eventually get an explanation for the state of the world, but it should have come sooner in my opinion.

Then there are the characters. Not to keep beating the whole deviation from the source material horse to death, but I feel compelled to mention the fact that starting out we know nothing about these characters. As such, there is no emotional connection; therefore it made me wonder why should I care about them. I will confess mild intrigue in the relationship between Aki and Gray Edwards. The two share history, and it caused me to be curious about that history, as well what caused the relationship comes to an end. We do eventually get the answer, but it felt more like melodrama than anything else. The film just failed to deliver a compelling story.

Final Fantasy: The Sprit Within is presented in its original aspect ratio of 1.85:1. The ultra-high-definition image presentation is arrived at with an HEVC codec at an average of 65-70 mbps. The upconverted image is a bit of a blessing and a curse. The faults of the 20-year old computer generated animation are certainly revealed here. The technology has come a long way since this film was shot, and the extra detail and resolution here isn’t always kind. On the other hand, the boost in color and contrast found with the HDR improvements is quite dramatic, to be sure. There is a more brilliant fiery red and orange body to the ghostly creatures that make them truly stand out when you add the greater black levels and contrast. Now they stand out starkly against the black environments. Some of the best images come in outer space. The rich blackness against pinpoints of bright stars or a nearby planet is quite nice, indeed. Honestly, I’m impressed with how much better it looks overall when you consider the age and f/x done at an HD, and some at 2K level.

The Atmos track defaults to a really solid 7.1 mix. The first thing you will notice right out of the gate is the sweet sub response. The opening credits deliver a heavy dose of lows that are both felt and heard. There’s actually quite a bit of sub going on here. Lots of rumbling of engines and even the background noise on a planet. Dialog comes through fine and is well placed in the mix. Surrounds offer some good ambient moments, and there’s plenty of ear candy to keep you pretty well immersed within the environments. I feel as though the score at times overwhelms the rest of the audio presentation. Too often it dominates everything else. It’s almost like it’s being used to cover some deficiency elsewhere.

When you open the Special Features Menu, the features are not clearly evident. There will be blank space that you need to navigate beyond before the features present themselves for selection. At least that is how our disc presented. It’s possible there was a glitch on this particular disc. We’d be curious to find out if others discovered the same issue. It should also be noted that these features appear only on the Blu-ray copy of the film and not the UHD disc. It appears these are all ported from an earlier edition, but we do not have that disc available to compare.

Ali’s Dream Reconstruction (09:02): The full dream sequence from the beginning of the movie. While it provides greater context of the aliens origins, I doubt it would have done much for the overall quality of the film, had it remained.

On the set with Aki (0:55): The film’s attempt at a computer-generated behind-the-scenes featurette. Given how brief it was, not really worth it.

Composition Builds (07:46): This was a worthless featurette that just shows the building of the composites. No explanation, just composites.

Matte Art Explorations (06:13): If this featurette had been paired with the composition build, it would have made them both worthwhile.

Original Opening (04:54): I think I would have preferred this opening sequence. Wish I could have seen it completely rendered.

The Gray Project (05:37): The animation test for establishing the movements and surroundings for the film. Another featurette that is short on explanation; just a series of images flowing across the screen.

Character Profiles: A 2-3 minute each in-depth look into each of the movie characters. Outside of Aki, Gray, and maybe Hein, if you want to get the antagonist perspective, my interest in the rest of the characters was limited.

Gag Reel: Worth a watch, especially given that it is rare to get an opportunity to see a gag reel featuring realistic computer-generated characters.

I won’t spend any more time attacking the film, but simply put, even with this second chance, there is nothing about the film that I want to take with me. I think the film should have dropped Final Fantasy from the title. It should have been marketed as The Spirit Within. Maybe I could have accepted it better, it didn’t feel like the film used the popular game franchise as a means of drawing an audience under false pretense. Maybe it could have stood a chance without a connection to the game franchise.

Jeremy Butler is a film school graduate of the International Academy of Design and Technology. He is been writing for Upcomingdiscs since 2012; however, movies have played a big part of his life for much longer. Favorite genres include horror, science fiction/fantasy, and comedy. Favorite movies are V for Vendetta, Boondocks Saints, Kiss Kiss Bang Bang, and The Godfather.
DC’s Legends of Tomorrow: The Complete Sixth Season Snowpiercer: The Complete Second Season (Blu-ray)