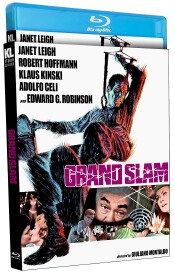 The original heist movie is often credited to The Asphalt Jungle, directed by John Huston.  A criminal mastermind, a million-dollar jewel heist, a band of outlaws, and the dame in a seamy and gritty underworld.  It had all the qualities that would set up that genre for decades to come.  Today’s offering is another film that is often listed on top-twenty lists for the genre, Ad ogni costo, better known by its English title as Grand Slam.  In it, a retiring school professor recruits four criminal masterminds to steal ten million in diamonds.  We’ll have to see if it makes the grade or is doomed to be held back for another year.

Rio de Janeiro.  Kids are shouting and singing as people board a plane to go to America.  In particular, these kids are wishing their former professor, James Anders (played by Edward G. Robinson) safe travels, as he happens to be going to New York.  Music is played, and a hearty goodbye is felt as we roll the credits.

It’s a blistery winter as we arrive in New York.  From the airport, the professor goes to a house with an M etched on it.  He is let in after he shows a note, and he goes through several rooms, one of which has a bunch of dressed-up socialites watching a woman sensually dance to some music. Ultimately he gets to where he needs to be, to see Mark Milford (played by Adolfo Celi), an old friend of forty-plus years.

Mark isn’t your normal rich person with a big house, bodyguards, and expensive clientele; he is in fact part of the criminal underworld who has hundreds of contacts for any conceivable job.  As it turns out, James has one such job in mind.  Ten million dollars in diamonds come to Rio de Janeiro every year around festival time and are stored in a vault across the street from the school where the professor used to teach.

James and Mark start to look through various categories of criminals that Mark has at his disposal (this, by the way, would be a wonderful device for a heist television show).  They select from four categories.  Electro-technicians, playboys, safe crackers, and the military are all chosen after careful consideration.

James proceeds to visit each of these candidates.  The electro-technician, Agostino Rossi (played by Riccardo Cucciolla), the safe cracker, Gregg (played by George Riguad), and the ex-military, Erich Weiss (played by Klaus Kinski).  Of special mention is the playboy, Jean Paul Audry (played by Robert Hoffman) who must seduce the dame of this picture, Mary Ann (played by Janet Leigh), who works at the bank and has the key to the vault.  Only time will tell if these four special chosen criminals will be able to pull off such a high-stakes heist without getting caught.

The movie is named Grand Slam after the security system (the Grand Slam 1970) that the team must figure out how to get around and crack.  The film has a wonderful setup and is brilliantly acted by the entire cast from top to bottom.  Many of the tropes that we find in heist films came from this very picture, and it oozes with great film mechanics as opposed to style with a grittiness that’s hard to match.

Klaus Kinski’s efforts to keep the team in check, Robert Hoffman’s tenacity to get the dame to fall for him, and Riccardo Cucciolla’s innocence that gives him unique perspectives of how to approach his work.  All of these elements help to form the film like clay into the mold that other films have emulated to this very day.  The twists were also refreshing as they led the film into a dark place that many will not see coming.  Personally, I did not care for the ultimate ending that felt like a case of the director trying a little too hard to come up with a clever final touch.

This movie is filmed in a 2.35:1 widescreen format.  The cinematography is expansive here as we have material shot in Italy, Spain, and West Germany.  (Nothing in New York or Brazil, oddly enough.)  Anyhow, while much of it is quite picturesque, it does feel muted, especially with the darker shots.

Often, nighttime or low-light scenes are hard to make out what exactly is going on sometimes (despite what the commentary folks think), and there is a lot of thick grain here regardless of the time of day.  I do think that most of this lies with the source, which I’m willing to forgive, but it should be noted nevertheless.

The sound to this film is presented in DTS HD 2.0 Master Audio in English and also has English SDH subtitles.  Dialog is clear, and there should be very little issue here even with accents and dialects aplenty featured throughout the film.  However, my main issue is the score and music of this film.

Yes, it is done by legendary composer Ennio Morricone.  Yes, it is also bloody awful.  Morricone was more famous for his scores of famous westerns, certainly not this dreck.  The screaming (disguised as singing) was not pleasant at all.  Also, I found any environment sounds to be lacking.  It will suffice for most, but I found it very average at best.

Audio Commentary by Film Historian Howard S. Berger, Steve Mitchell & Nathaniel Thompson: This was a very entertaining commentary; the back-and-forth aspect really helped this ensemble commentary.  Also, they seemed to actually enjoy watching the film together, which always makes for a much more pleasant experience.  Plenty of good information here, and one of the better Kino commentaries I have heard.

The inspirations from Rififi are all over the screen, right down to the film poster’s advertising which mentions it without any attempt to conceal its origins.  However, what that film does better, perhaps, is the idea of truly producing a picture with a grittier feel and showing us how dirty crime can be.  It almost felt like Grand Slam was trying to emulate that with perhaps a much bigger budget.  In the process, while it was a good film, it didn’t feel as quite as authentic and was a little more showy than it should have been.  It also didn’t help that the last twenty minutes pretty much sapped the heart out of the film entirely.

We get another solid disc from the fine folks at Kino.  The commentary is top-notch, and the video is as well, even if it sometimes feels muted.  There is a lot to like here if you are an aficionado of heist films or just dig those sixties-infused pictures.  Recommended as long as you don’t mind a bit of “salt” into your film endings.  Enjoy.

Michael Durr has been reviewing movies for the better part of fifteen years now. He primarily enjoys thrillers, sci-fi, animation and even a little courtroom drama. His favorite films include Escape from New York, the Goonies and anything with Alyssa Milano. When he’s not praising Kurt Russell as the greatest actor of our time or scratching his head over a David Lynch flick, he’s spending time at home in Texas with his lovely wife, Lori and his amazing son. How they put up with him is a mystery, but even Basil Rathbone doesn’t have the time to solve that one.
Beverly Hills Cop II (UHD Blu-ray) (4K) Ray Donovan: The Movie