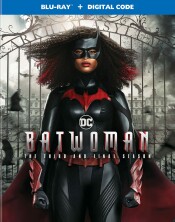 “Sounds like the Mad Hatter is throwing a tea party.”

Of all of the Arrowverse shows, I think Batwoman has had the hardest road of it. Ruby Rose was far from the dynamic character the CW or DC could have hoped for, and she spent most of her first season complaining or on the outs in some way or another. In her single season she was constantly outshone by her villain and pretty much everyone around her. It’s bad when the one in the cape and cowl can’t seem to attract any attention. It was a surprise to no one that Ruby Rose left the show after that first year. What did surprise me was that the show was going to continue. Instead of recasting Kate Kane, the powers that be brought in a completely different person to play the title character. Enter Ryan Wilder, played by Jevicia Leslie. She took the rap for a friend and ended up serving 18 months in prison for drug possession. Her foster mother was killed by some bad guys who never paid for the crime. Needless to say, she is carrying a lot of angst. Now she can’t find a job or a place to live. She’s homeless and living out of her van. She watches a ball of fire which turns out to be a plane crashing out of the sky. It hits near her van, and when she explores the wreckage, she finds the batsuit. Of course she puts it on and gets quite a kick out of the things she can do. She soon realizes the suit can help her get some revenge on the bad guys and starts kicking some butt.

This season deals with the results of Year 2. A case that held Batman’s “trophies” of his worst villain ended up in the river and scattered. These were the dangerous weapons of Batman’s infamous rogue gallery. They include: Joker’s Joy Buzzer, Mr. Freeze’s Liquid Nitrogen, Catwoman’s Whip, Clayface’s Clay, Penguin’s Umbrella, Mad Hatter’s Hat, King Croc’s Tooth, and Poison Ivy’s Vine. The season’s task is to locate these items before they fall into the wrong hands. Or barring that, stop those wrong hands from destroying Gotham City.

No hero can do it alone, and while the series was retooled to do away with Kane’s military crime fighters, many members of the Kane family and circle of friends remained. Luke Fox (Johnson) is the son of the famous Lucious Fox, who worked for Wayne Enterprises and was one of the few people who knew that Bruce Wayne was Batman. Fox was the genius who came up with most of those famous gadgets for the Caped Crusader. Now his son Luke is carrying the torch. While his father is long dead, that doesn’t stop there being a reunion this season. You might recall from Season 2 that Luke discovered a suit that had been designed and built by his father based on drawings a young Luke made. Luke uses the suit to become Bat Wing this year. The suit is pretty much an Iron Man knock-off with the AI of Luke’s father acting as the suit’s interface. Luke has to go on his own hero’s journey to gain the confidence to be ready for the suit. Honestly I loved this idea and thought it was much more interesting than anything going on with Batwoman. Camrus Johnson is fantastic, and these hero journey stories are the stuff the old comics were made of. A true opportunity missed by not building around this actor/character and his story.

Mary (Kang) is a huge holdover from the Ruby Rose days. She was Kate’s sister and also provided far more dynamic stories as the medical student running an illegal clinic for people who can’t afford medical care. Again it’s a wonderful character with a wonderful journey. This year Mary gets a lot to do. She teams up with Alice (Skarsten), who is the most dynamic character/actress on the show. The Team Bat is given an ultimatum from Detective Renee Montoya, played once again by Victoria Cartagena. More on that later. For Mary that means a partner in crime when she’s infected by Poison Ivy’s vine and turns bad girl. With her and Alice on the road doing nasty stuff again, the show delivers on its promise. She gets her MD this season, but it comes at a huge price.

Now about Montoya. She was a character on the FOX series Gotham. She is here being played by the same actress, and that appears to imply that these two shows are in the same DC Universe, which means Gotham was actually part of the Arrowverse even though it played on a different network. Montoya is also kind of a villain here. She’s obsessed with taking down Ivy because Ivy killed her close friend. She threatens to expose the entire Bat Team operation if they don’t team up with Alice to get those trophies back safe and sound.

And, of course, there’s Batwoman, aka Ryan. I just can’t get into her or her character no matter how good the people around her might be. And she gets to play with a new powerhouse this season. She discovers that her birth mother didn’t die in childbirth. Instead she’s a rich CEO who paid $2 million to fake her death. Enter special guest star Robin Givens, who adds a world of gravitas to her character of Jada Jet. You kind of never know which side she’s working for until pretty much the end, but it’s fun watching her work. She has a son Marquis Jet, played brilliantly by Nick Creegan. We learn he was infected with the Joker’s Buzzer when he was a child, and that brings out a dark side that we eventually get to see full-blown. It’s believed that another jolt from the buzzer could cure him. There are two problems. He’s quickly evolving into a new Joker with plans to kill millions, and Alice also thinks the buzzer might cure her. Problem is there’s only one shot left.

Loyalties change a bit as the season progresses, and it’s obvious that they did not know this would be their last season. The season finale which has become the series finale sets up a bit of a cliffhanger and certainly the feeling of more to come. That’s not meant to be. You get all 13 episodes and extras on four discs.

Each episode is presented in its original broadcast aspect ratio of 1.200:1. The 1080p image is arrived at with an AVC MPEG-4 codec. This high-definition image presentation will take you to an entirely different world. There’s a lot of gritty texture to be found here. Colors don’t often pop. This is often almost a monochromatic world, but once in a while a single color will pop to deliver stunning contrast. It might be a red wig or a bright dress, but it offers just the right balance to break up any of the dreariness to be found here. Fortunately, black levels are up to the challenge with rather sweet shadow definition. A lot happens in these shadows, and we wouldn’t want it lost. For a television show, this is as fantastic as a world gets.

Batwing – A Hero’s Journey: (13:45) A look at the evolution of the character who got the short end with the series ending.

It appeared clear long before Ruby Rose exited that this show wasn’t getting the kind of numbers other Arrowverse shows were getting. The showrunners paid too much attention on the character’s social attributes and not enough time on finding a dynamic actress to fill the suit. The agenda items could have taken care of themselves as they have on the other shows, but more seamlessly. In the end everyone around the main character was so much more compelling than Batwoman was. It’s a shame, but I’d look at this cancellation as more of a mercy killing. I’ve followed the series from its first episode. “This is me punching out.”

Gino Sassani is a member of the Southeastern Film Critic's Association (SEFCA). He is a film and television critic based in Tampa, Florida. He's also the Senior Editor here at Upcomingdiscs. Gino started reviewing films in the early 1990's as a segment of his local television show Focus. He's an award-winning recording artist for Omega Records. Gino is currently working on his 8th album Merchants & Mercenaries. Gino took over Upcomingdiscs Dec 1, 2008. He works out of a home theater he calls The Reel World. Favorite films: The Godfather, The Godfather Part II, The Body Snatcher (Val Lewton film with Karloff and Lugosi, not the pod people film), Unforgiven, Gladiator, The Lion King, Jaws, Son Of Frankenstein, The Good, The Bad And The Ugly, and Monsters, Inc.
Downton Abbey: A New Era (Blu-ray) Exclusive Interview With Michael Chait: Director Of Wolf Hound