Posted in: Disc Reviews by Michael Durr on November 5th, 2022 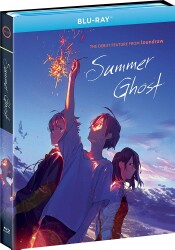 Many people will agree to disagree on the existence of ghosts.  It is probably easier to agree on the point that if those ghosts do exist, they were wronged in some fashion, or there is something left to their story that is unsolved.  That mystery is what makes the concept of ghosts so fascinating.  Today, we have another GKids anime production, this time by the genius loundraw.  It’s called Summer Ghost.  Let’s take a trip into the paranormal.

A light burns.   Three friends who haven’t seen each other have gathered in this special place.  Summer is here again.

The scene shifts, a cafe.  A boy named Tomoya Sugisaki (voiced by Chiaki Kobayashi)  meets a girl named Aoi Harukawa (voiced by Miyuri Shimabukuro).  Soon they are joined by Ryo Kobayashi (voiced by Nobunaga Shimazaki).  All three of these kids met online for a specific task.  That task is to get the Summer Ghost to appear.  Let’s start.

The teenage group start by talking about past stories where this particular ghost appears and how it happened.  One of the common links was that they all used fireworks, and so they buy a bunch of sparklers and other assorted items.  Another few details drop abut the Summer Ghost, one of which is that according to rumors she committed suicide.

Another scene, we see Sugisaki being praised for receiving all A’s at his school.  Back to the three newly acquainted friends who are burning fireworks and waiting for the ghost to appear.  They are down to the last one with no sign as of yet.  Sugisaki feels something…Ayane Soto (voiced by Rina Kawaei), the summer ghost, is here.  She says, “What do you want with a dead person like me?”

We learn more about the backstories of the three teens who are reckoning with the idea of death.  But Ayane Soto has a secret that has yet to be revealed.  Tomoya needs to learn the secret of the Summer Ghost and then solve the mystery behind it.  So he goes back with more fireworks to find the answer.

The rest of the story dives into the mystery behind Ayane Soto but also into the backstories of why Tomoya, Aoi, and Ryo are so close to death on their own.  It is an emotional journey, but also by the end of the story, an uplifting one that teaches you to treasure life especially when it can be taken from you in an instant.

First, let me focus on the point that this movie is only roughly 40 minutes long.  It’s an extended short, but somehow in that span of time, the film goes out of its way to create such raw emotion.  It’s rich in detail, and yes, it could have been expanded in its exposition (and selfishly I did want more film), but it’s honestly not necessary, as you will be transported to a beautiful and serene dream.  This is especially true for those who have experienced brushes with suicide.

This movie is filmed in a 1.78:1 aspect widescreen format.  Wow.  The painstaking detail and gorgeous colors jump off the screen.  It’s always refreshing to see such realistic imagery but yet at the same time still be “animated”.  Everything pops with a burst of color. I’m honestly not sure why they didn’t bump this up to a 4K disc.  Flesh tones are accurate, and all items on the screen have purpose in creating this dreamlike world of the supernatural but still rooted in something realistic.

The sound to this film is presented in Japanese and English DTS-HD 5.1 Surround with English (original), English SDH and Spanish subtitles.  From the first firework crackling with beautiful surrounds to interaction back and forth with a wonderful score behind it, the sound does everything it can  to immerse you into this world and make the viewer feel welcome.

To You Before Dawn Documentary 1:18:53: Longer than the entire movie, this documentary takes a trip with the crew from the very beginning with the concept to finishing up in the editing room and waiting for release day.  Of course, a lot of the focus is on loundraw here and the absolutely backbreaking work that he takes on in order to make something so close to perfect in his mind.  This doc is very interesting for any wannabe creator whomight want to be in this field.  However, I will say that it can be a touch boring at times if you aren’t completely into the subject matter.  In Japanese with English subtitles.

Feature Animatic 37:12: This is what it sounds like, the entire feature in a base animatic or moving unfinished drawing form.  Best if you have watched the movie several times and need a new way to enjoy it.

Interview with loundraw 13:36: This amazing creator stops by for a brief conversation.  His name is actually made up on three words, he explains: Surround, Loud and Draw.  He explains about the process he goes through and how he came up with the idea for this extended short.  In Japanese with English subtitles.

The original release of this film from Japan had a soundtrack as well as a nice full-color booklet.  Unfortunately, neither of those items made its way to the Shout Factory disc.  We did, however, get this wonderful film and a nice selection of extras for our consumption.  It’s a film that despite its dark subject matter produces such positive feelings and should be shown to anyone who might be going through a tough time.

The disc has some of the best video and audio that you will find in a Blu-ray.  The extras do a lot to expand the film, which gives the viewer a lot to do even after the film has been viewed a couple of times (which is vital in my opinion to really experience the picture).  Anime can often be hit-or-miss, but this is a home run.  This is an easy recommendation, and won’t take too much time out of your day.  But it will stick with you for a lifetime.  Enjoy.

Michael Durr has been reviewing movies for the better part of fifteen years now. He primarily enjoys thrillers, sci-fi, animation and even a little courtroom drama. His favorite films include Escape from New York, the Goonies and anything with Alyssa Milano. When he’s not praising Kurt Russell as the greatest actor of our time or scratching his head over a David Lynch flick, he’s spending time at home in Texas with his lovely wife, Lori and his amazing son. How they put up with him is a mystery, but even Basil Rathbone doesn’t have the time to solve that one.
Top Gun: Maverick (Blu-ray) Unidentified