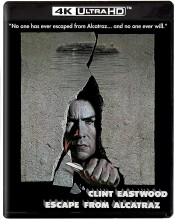 “It’s opening up all kinds of doors.”

Alcatraz Prison was one of the country’s most secure facilities for over 60 years. It was built on a rocky island off San Francisco. You couldn’t dig through the rock, and the surrounding ocean was cold and heavily populated by sharks big enough to feed off the plentiful seal population. For 60 years no one had successfully escaped the prison. That record was broken in June of 1962 when three inmates, brothers Clarence and John Anglin, escaped with Frank Morris, who was believed to have masterminded the plot. Sixty years later the case remains officially open, and no one knows what happened to the three men. In 1963 J. Campbell Bruce wrote a non-fiction book called Escape From Alcatraz. The book attempted to document all of the serious attempts to escape the prison, which of course included the 1962 escape. The book also called attention to some of the conditions of the prison and was a part of the reason it shut down completely just a year after publication of the book.

Enter Hollywood screenwriter Richard Tuggle, who took on the script on spec and researched the events of the book and created a treatment to shop around. The problem was he couldn’t find a single party that was interested in the property. He used a lie to get director Don Siegal’s agent to forward a copy to the director. The ruse paid off, and Siegal shared it with his Dirty Harry partner Clint Eastwood, who wanted very much to do the film. That interest led to the story finally making it to film in 1979. Escape From Alcatraz was a go, and now it’s finally made its way to UHD/4K, and that’s where the fun begins, thanks to Kino-Lorber.

While the escape is the obvious draw to the film, Siegal and Eastwood agreed early that the film wouldn’t just be an escape plot drama. The decision was made early to populate the film with interesting characters that if well cast (and it was) would make for a compelling drama even without the escape plot points. They put that idea to the test when the escape plot doesn’t even really begin until halfway through the film. Instead we’re introduced to these amazing characters, and this would be a model followed later by Steven King and his gang for his prison films The Shawshank Redemption and The Green Mile. But that kind of prison film started here with Escape From Alcatraz.

“If you disobey the rules of society, they send you to prison; if you disobey the rules of the prison, they send you to US. Alcatraz is not like any other prison in the United States. Here, every inmate is confined ALONE … to an individual cell. Unlike my predecessors, Wardens Johnson and Blackwell, I don’t have good conduct programs, I do not have inmate councils. Inmates here have no say in what they do; they do as they’re told. You’re not permitted to have newspapers or magazines carrying news; knowledge of the outside world is, ah, what we tell you. From this day on, your world will be everything that happens in this building.”

The opening of the film features a first six minutes with no dialog. We watch the process of a prisoner, lost in shadow of a dark night, who is being transported by boat to Alcatraz. Once there, he’s processed, and the first inkling of dialog begins. Clint Eastwood plays Frank Morris, who is sent here because he’s escaped from a few other prisons over the years. He’s the “new fish”, and that means having to establish himself as someone not to be messed with. That kind of action is required almost immediately when fat thug Wolf (Fischer) decides that Frank is going to be his next butt buddy. Of course, Frank takes him down, but now he’s made a dangerous enemy, and attempts on his life are going to inspire the timetable when the escape plan begins.

“Alcatraz was built to keep all the rotten eggs in one basket, and I was specially chosen to make sure that the stink from the basket does not escape. Since I’ve been warden, a few people have tried to escape. Most of them have been recaptured; those that haven’t have been killed or drowned in the bay. No one has ever escaped from Alcatraz. And no one ever will!”

As I’ve mentioned, the prison is filled with wonderfully crafted characters. Frank first befriends Litmus, played by Frank Ronzio. He a wise kind of man ho feeds some of his meal to a mouse he keeps as a pet. This idea of a prison pet would be used by King in both of his prison stories/films. Then there’s Chester ‘Doc” Dalton. He’s a kindly old lifer who passes his years by painting. That is until he paints the wrong subject and gets those privileges taken away That event leads to one of the more dramatic and emotional scenes in the prison wood shop. Frank meets mild, fatalistic English, played by Paul Benjamin. Don’t let his mild exterior fool you. He’s the leader of the black element in the prison  and I suppose some are going to be offended by the fact that Frank and English trade racial barbs even though it’s completely clear that the barbs are traded in an affectionate way. Danny Glover gets his first film appearance as a background inmate. Then there’s Charlie Butts, played by Larry Hankin. He’s a car thief who just can’t catch a break  and that follows him here and in the escape plan. He’s a kind of ignorant guy who can’t get out of his own way even though he’s not by nature a horrible guy. It was the first sizable role for the actor. Of course, the warden is the kind of a guy who would have been just as at home as a German Nazi camp commander. Patrick McGoohan eats up the part and couldn’t have been cast better. Part of Frank’s need to escape is premised on his need to show up the warden  as evidenced by the film’s final scene actually added by Eastwood where the warden finds the flower on Angel Island.

The escape plot begins when Frank’s friends from another prison get sent to Alcatraz. The Anglin Brothers, Clarence (Thibeau) and John (Ward), inspire Frank to find a way out. He discovers that the cement of the buildings has been weakened by years of salty and damp air. He thinks he can dig around his ventilation grill and work himself up to the roof of the prison. From there they can build floatation devices using raincoats and rubber cement to get through the water. They made dummy heads to make it look like they were sleeping in their cells to give them a several hour head start. We never know if they made it, just like the actual events. The film does, however, lead us into believing they did make it. After all, a lot of time was spent getting us to like these guys, and we don’t really want them to have died in the attempt, do we? I still think there’s a chance Butch and Sundance made it, so it’s not that much of a stretch for me.

The film benefits from the long-time collaboration of Clint Eastwood and Don Siegal who brought us Dirty Harry. But the film would also lead to a falling out between the partners and become their last film together. It’s unfortunate, to be sure. It all came about over production companies. Siegal wanted the film produced under his Don Siegal Films banner, while Eastwood insisted that it be his Mariposa company. They both ended up sharing the production, and it’s a fight that wouldn’t have existed today. Watch any film and you sit through a few minutes of tags from various studios and production companies. Hollywood has since learned that multiple companies means sharing the risks, and if there are rewards, it’s not a bad deal. Rarely does a big-budget film carry only one production company. In 1979 it was rare for those duties and credits to be shared. Escape From Alcatraz was a turning point in how films are made from the production point of view. Eastwood and Siegal have since reconciled, but they never did work together again.

Escape From Alcatraz is presented in its original aspect ratio of 1.85:1. The ultra-high-definition image presentation is arrived at with an HEVC codec at an average of 70 mbps. The film was shot on 35mm, so is native 4K. This is a truly atmospheric film, and a lot happens in the shadows. From Frank’s arrival to the escape tasks that occur late at night in the bowels of the prison, it’s important that black levels are up to the task. The HDR allows that superior contrast with deep blacks that also give us wonderful shadow definition with source lighting true to the film’s intent. Don’t be confused by a couple of rather black scenes that feature little or no detail. You’re not missing elements of the action; it’s part of the way it was shot with almost no lighting, and it’s absolutely the intent of the film. The film’s grain remains, and I was happy that there is little evidence of DNR abuse. Colors reflect the accuracy of the 1979 film stock. Details come out. The wood shop incident is particularly more detailed with a clarity I don’t recall from earlier releases. The textures of the prison uniforms come through, as do close-ups and facial features.

The DTS-HD 5.1 audio presentation has not been upgraded, and just like I mentioned in To Kill A Mockingbird, there really is no reason to create a more aggressive or expanded presentation. There is something claustrophobic here that is a huge part of the atmosphere. The dialog is served well, and that’s all I really want from this transfer.

The extras are found one on the Blu-ray disc and consist of an audio commentary and two interviews:

This is one of those films that appears custom-made for Clint Eastwood. It’s been a favorite of mine, but it’s been often overlooked compared to his more iconic roles and other more recent prison films. But it changed that sub-genre significantly, and those influences remain today. There is little doubt in my mind that this film was a huge influence on Steven King, and there’s no question he “borrowed” more than a few elements from this work. Maybe I shouldn’t say that. “There’s always the possibility that some asshole will be offended. Isn’t there?”

Gino Sassani is a member of the Southeastern Film Critic's Association (SEFCA). He is a film and television critic based in Tampa, Florida. He's also the Senior Editor here at Upcomingdiscs. Gino started reviewing films in the early 1990's as a segment of his local television show Focus. He's an award-winning recording artist for Omega Records. Gino is currently working on his 8th album Merchants & Mercenaries. Gino took over Upcomingdiscs Dec 1, 2008. He works out of a home theater he calls The Reel World. Favorite films: The Godfather, The Godfather Part II, The Body Snatcher (Val Lewton film with Karloff and Lugosi, not the pod people film), Unforgiven, Gladiator, The Lion King, Jaws, Son Of Frankenstein, The Good, The Bad And The Ugly, and Monsters, Inc.
High Plains Drifter (UHD Blu-ray) (4K) Holiday Gift Guide Spotlight: To Kill a Mockingbird 60th Anniversary Limited Edition (UHD Blu-ray) (4K)