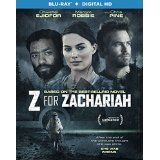 Between Judgment Day, zombie apocalypses, and various other doomsday scenarios, we’ve gotten a pretty good look at what the end of the world is supposed to look like. One of the most striking things about Z for Zachariah — an otherwise straightforward and deliberate drama that takes its story from a 1974 novel of the same name by Robert C. O’Brien — is that, for the most part, the end of the world looks an awful lot like paradise.

In fact, the biggest visual clues that this is even a post-apocalyptic story occur within the first 10 minutes or so. That’s when we’re introduced to a slight, shapeless figure in a makeshift decontamination suit pushing a cart through a barren, abandoned town. We eventually find out her name is Ann Burden (Margot Robbie), and she is presumably the only survivor of an unspecified disaster that has wiped out most of civilization. Ann survives on her family’s farmland, which is uniquely (and miraculously) located in a place that shields her from radiation. She also has plenty of fresh water at her disposal. One day, Ann is shocked to find another survivor in a radiation suit.

After a close call and a misunderstanding, we learn the man’s name is John Loomis (Chiwetel Ejiofor). He is a resourceful engineer who escaped from a military bunker and found his way to the valley where Ann’s farmhouse is located. The two grow close despite their differences: goodhearted, spiritual Ann is grateful for the company and seems content for things to stay the way they were, while the more pragmatic “Man of Science” Loomis proposes tearing down the small church on the family’s land to build a wheel for the nearby waterfall, which would provide electricity. And just as the subject of re-populating the Earth comes up, the duo comes across a mysterious man named Caleb (Chris Pine). Ann welcomes the stranger into her farmhouse — just as she did with Loomis — but there is immediate friction between the two men. Is it because a seemingly charming rogue like Caleb shouldn’t be trusted? Or is it much simpler than that, and these two dudes are essentially competing for the last woman on Earth.

To be honest, I never read O’Brien’s novel. However, this disc’s Special Features section reveals the film adaptation deviates from the story in a few significant ways. For one, this version of Ann is a little older than the teenager in the book, an understandable change which is undoubtedly designed to make the movie’s central love triangle feel less icky. The casting of Ejiofor is also a departure, since Loomis isn’t black in the original story. I like this change because Ejiofor is an awesome actor who shouldn’t have to play a Slave to snag a lead role in a movie. More importantly, it creates an intriguing potential barrier between Ann and Loomis. The idea is that, when there are only two people left in the world, differences based on race or philosophy might not — or at least should not — matter as much. (Or at all.)

That’s why the most provocative addition is Caleb, a character who doesn’t appear in the novel. (Makes me wonder what the source of conflict is in the original story.) Other than his cagey demeanor — which clashes with Ann’s naïve open-heartedness — good ol’ boy Caleb superficially has much more in common with Ann than Loomis does. Director Craig Zobel, working from a script by Nissar Modi, steers directly into the story’s religious overtones. (The movie’s title is a reference to a Biblical alphabet book in Ann’s house.) Burden Valley and Ann’s farmhouse serve as an oasis in the post-apocalyptic world, and it eventually comes to resemble a version of Eden after Ann and Loomis start building a life together. Following that same line of thinking, Caleb represents the snake in their garden.

Then again, it all depends on how you look at things. And despite telling a relatively simplistic story, Z for Zachariah is constructed in a way that invites multiple interpretations. It helps that the movie is in the hands of very capable actors. Ejiofor gives Loomis a subtle, mad glint that belies the character’s reasonable demeanor and makes us believe he’s capable of taking extreme measures to survive. (And an early monologue reveals Loomis has already done just that.) Meanwhile, Pine is at his most alive (Star Trek, Into the Woods) when he’s being a little oily. So even though we don’t know as much about Caleb’s backstory — his own survival tale paints him in a more sympathetic light than Loomis — it’s more natural to distrust him. Robbie, who has impressively and glamorously held her own opposite Leonard DiCaprio and Will Smith, wears a Plain Jane shade of brown here and transitions into more of a lead role with ease. Her Ann may not be a teen, but Robbie is convincingly guileless and optimistic without crossing the line into being a total sap.

Z for Zachariah, not surprisingly, leaves the fate of one character up in the air. (And I’m not talking about Ann’s dog, who mysteriously goes missing less than halfway through the film.) You can have a debate about what happened to this particular character — I know where I stand — but I mostly found the film’s contemplative, picturesque, and openly-spiritual approach to the end of the world a nice change of pace.

Z for Zachariah is presented in an aspect ratio of 2.40:1. The 1080p image is arrived at with an AVC MPEG-4 codec at an average of 36 mbps. Turns out the “Garden of Eden” on Earth is located in New Zealand, which is where most of this movie was filmed. (With a little West Virginia mixed in.) The result is an impressively textured and pleasingly woodsy palette — lots of green and browns — that especially shines in panoramic shots. (Even though the image isn’t always what you’d call razor sharp.) There is also a warm, golden hue on Ann’s farm that is the opposite of what you usually see in end-of-the-world stories. Black levels are deep and offer strong separation, particularly during a nighttime swim for the three characters.

The DTS-HD Master Audio 5.1 track is a solid companion for the movie’s subtly effective visual presentation. A lot of the more obvious ambient noise— whooshing winds, a crashing waterfall — comes from the rears early on, when Ann’s farmlife is still being established. Dialogue is always clean, and fidelity is pretty spot on. Subs don’t have much work to do beyond offering a low rumble when the characters are near the waterfall. Again, this film offers a quieter, more reflective approach to the end of the world, and this track absolutely follows suit.

The Making of Z for Zachariah: (11:28) The changes from the book are discussed here, along with the fact that Zobel would also deviate from Modi’s script while filming. The cast and crew talk about the movie’s themes, including the fact that this is a story about people who probably wouldn’t be together under normal circumstances.

Deleted Scenes: (6:00) There are four scenes total, including one in which Loomis contemplates leaving the farmhouse early on. There is also an extended version of the drunken evening of partying and swimming between the three characters. Features a Play All option.

Extended Interviews: (20:14) Includes longer chats with director Craig Zobel, stars Margot Robbie and Chiwetel Ejiofor, and writer Nissar Modi. While Robbie and Ejiofor speak eloquently about their characters, the best of the bunch are the interviews with Zobel (who wanted to tell the story of a year-long relationship in a short amount of time) and Modi (who discusses the deviations from the book). Features a Play All option.

Of course, that’s one of the things I enjoyed about it, along with its solid performances and thought-provoking storyline. I realize some people might slam this movie for being boring or too slow. (The “Zzzzzzz for Zachariah“ joke writes itself.) But check this out if you don’t mind a more leisurely look at the apocalypse.