Posted in: Disc Reviews by David Annandale on September 23rd, 2003

A terrible virus called Rage (which just happens to be the French word for rabies, thatdistinctly English fear) gets loose and ravages the population of Britain. 28 days after the initialrelease, Cilian Murphy wakes up in a deserted hospital. He wanders around empty London,wondering where everyone has gone, until, come night, he is attacked by a horde of the infected,who move like George Romero zombies on speed. He is rescued by Naomie Harris, and togetherthey then hook up …ith Brendan Gleeson and daughter Megan Burns. They leave London,heading for the north, following a broadcast that promises shelter and a cure. Their problems areonly beginning. Danny Boyle’s film, scripted by Alex Garland, owes a lot to Romero’s Dawnof the Dead and to John Wyndham’s novel The Day of the Triffids (less so to themovie version of that book). Does it, as some have claimed, reinvent the zombie movie? No, notreally. It does rework the familiar motifs with great intelligence, however. It also achieves imagesof startling beauty, greatly expanding the horizon for movies shot on DV. Most importantly,however, it is suspenseful, gruellingly intense, and doesn’t water down its horrors with comicrelief.

The intensity and terror of the film are helped no end by the superb 5.1 sound mix. Themusic is well handled, with one standout being the slow crescendo to full-out surround roaringduring Murphy’s search of deserted London. The sound effects are harsh, jagged and startling,stabbing at you from unexpected corners of the room, and virtually guaranteed to keep you onedge. The whoosh sounds in particular are startling. The left-right separation is excellentas well (there are a couple of flies on the soundtrack that will have you reaching for a flyswatteras they flit from side to side of the room). The dialogue is perfectly clear, and the ominoussilence in some scenes is free of background hiss.

The look of this film, being shot on DV, is rather different from that of your standard release.Rather than try to make DV look like film, the decision here appears to have been to celebrate thedifferent look, and explore just what DV is capable of. One does, therefore, encounter some quitenoticeable grain, but that is from the source material, and is not the transfer’s fault. The image isvery sharp, and thus shows imperfections (which are clearly meant to be there) very clearly. Thetheatrical look, from strange, painting-like shots to home-movie-from-hell aspects, is perfectlypreserved. The contrasts are astonishing, with the blazing reds of fires standing out explosivelyfrom the deep blacks of the night. This is a very beautiful film, and each viewing reveals more.This is not a conventional beauty, but is rather that of a new medium, and the transfer is perfectlysuited to exploring this new look. This edition has a gorgeous 1.85:1 anamorphic widescreenaspect. There is a fullscreen version available too, but why would you want it?

Partway through its theatrical release, 28 Days Later acquired a DVD-like extra in theform of an alternate ending playing after the credits. It is only fitting, then, that the DVD havethree such endings: the theatrical alternate, an incomplete alternate (much of the sound has yet tobe added and the time code is still visible), and a never shot, “Radical” version, in the form ofstoryboards narrated by Boyle and Garland. These two creators also provide optionalcommentary on the first two endings, as well as for the film itself. Both men are articulate, andthey cover a lot of how-we-did-this-and-why ground. I am a bit surprised that, while discussingthe scene where Murphy must kill a small child, Garland doesn’t refer to an essentially identicalsequence from Dawn of the Dead. Be that as it may, this is still a good commentary. Stillmore optional commentary accompanies six deleted scenes.

If you still haven’t had enough commentary, yet more is provided for the photo galleries.There are two: “Production” and “Polaroid.” While not every picture is described, this is still somuch better than the countless other galleries out there that have no identification for the pictureswhatsoever. The “Marketing” extras are the theatrical teaser, the theatrical trailer, the animatedstoryboards from the UK website, and a Jacknife Lee music video. “Prime Rage: The Making of28 Days Later” is the usual promotional featurette. The menu’s main page, introduction andtransitions are animated and scored. The main page is very much in the spirit of the movie, andits sudden flashes of movement should help make people nervous before they even hit Play.

A terrific disc, and a terrific film. This is one of those horror movies that will still be writtenabout years from now. Highly recommended. 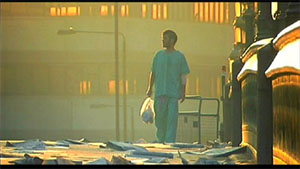 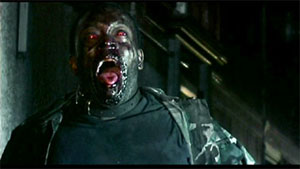 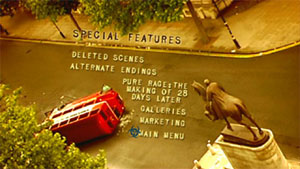 The Legend of Sleepy Hollow Bionicle: Mask Of Light