Master and Commander – The Far Side of the World

Posted in: Disc Reviews by Archive Authors on April 5th, 2004

Master and Commander is an epic tale that is adapted from 2 novels of a 20 novel collection by writer Patrick O’Brian. This Napoleonic-era story follows the escapades of Captain “Lucky” Jack Aubrey (Russell Crowe) and his intrepid crew aboard the British war frigate HMS Surprise, as they try to hunt down and capture or destroy the French warship Acheron. The Film gets off to a fast start as Capt. Aubrey and crew are ambushed by the Acheron and decimated in short order. This initial attack is well done and well acted … the initial surprise and horror of the crew of the Surprise is visceral, which is then overtaken by the start of a fine performance by Russell Crowe as a battle savvy Captain who quickly sizes up the situation and inspires his crew to survive the initial assault. After the narrow escape we are introduced into a few of the other major members of the crew. Paul Betthany plays the ship’s surgeon Stephen Maturin, and the Captain’s close friend and confidant. This is a very fine performance in which the friendship the two share and their differences in opinion about duty are strained. After two narrow escapes, Jack Aubrey makes it his personal mission to track down the faster, more heavily armored, and more heavily armed Archeron even if it takes him to the far side of the world (which in this case is the Galapagos Islands).

The acting in this film is great. While these are men of war and duty, and the emotional tone is one of courage and bravery, there are many scenes where the fear is palpable and scenes of betrayal that are very believable. In particular the exchanges between Betthany and Crowe when Crowe has to pull rank is very moving – he has to do what he believes even if that costs him the most important relationship that he has on his vessel. The two major battles are well done – both the ship to ship cannon-fire and the chaos of the boarding scene at the end. The cinematography is excellent with wide sweeping shots of the ship on the open ocean in varying conditions from calm sunsets to “perfect storm” settings.

Now the not so good. This film reportedly cost $150 million but only brought in $93 million – this would be considered a box-office bomb. Russell Crowe plus warships should equal box-office success, right? Well I think this movie was marketed wrong – I’ve read some reviews that called this “Gladiator on boats.” Well you couldn’t be more wrong. This is not an action movie in the classical sense – there are only two major battles – at the beginning and at the end. That’s it. This is a historical drama set during the Napoleonic years that focuses on the relationship between the Captain and his right-hand man, the ship’s surgeon.

This movie lacks the manic pace of the aforementioned Gladiator and lacks the singular heroism of that movie. If you go into this movie with the attitude that this is a action picture, after the first 30 minutes you would likely start to feel bored – the pace slows completely down almost to a grinding halt to start to explore the relationships between the shipmates. Finally there was a scene that completely shattered any sense of reality of this movie for me. For the readers that have no surgical experience, this will not be a big deal, but for others in the medical professions read on. The ship’s surgeon gets accidentally shot in the left upper abdomen by one of the crew. No one on the crew is skilled enough to remove the bullet – so guess what? Dr. Maturin has to perform surgery on himself, with no anesthetic! And better yet, as he is lying down while he does this, an assistant has to hold a mirror at his waist so that he can view his abdominal cavity while he explores the wound. So in other words he is opening up his own abdomen, exploring it using a mirror i.e. based on an inversed image, no less, and telling his assistants to retract his lower ribs so he can get a better look. Anyone see any problems with this? First of all, surgeons can do surgery with inversed images… it’s called laproscapy and it takes years to learn how to do it properly. Secondly, retracting ribs is no easy feat – for the person retracting it takes a decent amount of force to move ribs. The person whose having their ribs retracted doesn’t complain… because he is asleep! This would be very painful to do if one was awake!

Master and Commander is presented in a 2.40:1 aspect ratio. The film is as sharp as they come. The colors are limited to blues, blacks and grays, but that is the color palette that was chosen for the film and has nothing to do with the transfer. There is excellent detail particularly in low light scenes – the night chase was particularly striking in the amount of detail that could be noticed. The black level was well set and the skin tomes were excellent.

There are two English tracks – Dolby Digital 5.1 and a very impressive DTS track. In addition there are a French and Spanish 2.0 tracks. The DTS track included is so realistic that you would swear you were in the middle of the battles. The rears are used consistently and separation is first class. At several points in the film you can hear cannons firing towards you, they come from the front speakers and whiz past you, ending up in the rears. It is not just the battle scenes where this soundtrack impresses though, as some of the quieter scenes are also well defined and the rears are used for the subtler effects. Dialogue levels are also perfect and never seemed to get muffled in the midst of all the chaotic battle scenes.

The only extras which can be found on the one disc release are trailers for The Day After Tomorrow, Man on Fire and I Robot Sizzle Reel and a link to the Fox website. The I Robot feature is a short teaser for Will Smith’s latest movie which if truth be told actually looks quite interesting. Whether it delivers is another thing, but I am sure that this extra will whet people’s appetite.

This was a movie with great press but likely poor marketing which may have explained it’s relatively poor showing at the box office. This is not an action movie – if you keep that in mind you will enjoy this film for what it is. But don’t believe all of the press – the cover has the quote “The Best Movie of The Year!” from A.O. Scott from the New York Times. Well A.O. Scott should have his reviewer’s license pulled – Return of the King is the best movie of the year. Master and Commander is a very good movie but not the best. In addition if you want a rockem’ sockem’ action flick with big boats watch Pirates of the Caribbean, you’ll have a much better time. But if you have any interest in history and nautical warfare – Master and Commander is definitely up your alley! 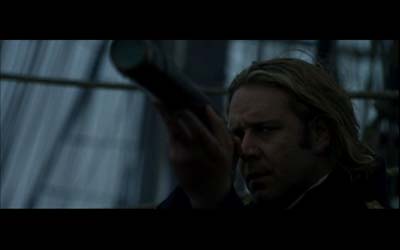 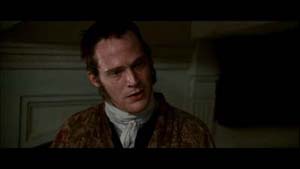 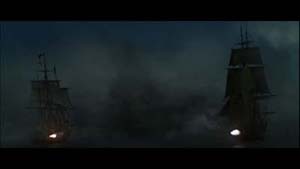