Posted in: Disc Reviews by Archive Authors on July 10th, 2005 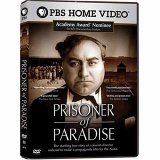 Prisoner of Paradise is the haunting story of German film and theatre actor, Kurt Gerron. This Oscar nominated documentary follows his rise and fall. Gerron was one of Germany’s most popular stage and screen actors before World War II. He was the original singer, in fact, of “Mack the Knife” in Brecht’s “Three Penny Opera”. Gerron’s popularity, however, took a different turn with the rise of Hitler’s Germany. Gerron was Jewish and, eventually, was forced to flee. But later he was captured and then hired…to make a propaganda concentration camp film. This documentary is a fascinating tale of history, as well as being a moving character study. The narration by Ian Holm is clinically precise.

The Dolby Digital 2.0 audio track is fine. The narration, interviews, and music come through clearly and cleanly. Not much directionality here. It’s a PBS documentary.

The film is presented in a 1.85:1 widescreen format. The video is full of archival footage. The footage looks well worn. However, the new interview footage is quite clean.

None. Although the disc says it has more footage than the original broadcast.

Prisoner of Paradise is a tragic tale, which makes for a compelling documentary. Well worth a look.