Posted in: Disc Reviews by Michael Durr on June 3rd, 2009

Sword and Sandal films have been around since the early 1900’s and under the broad definition, Ben Hur was the first way back in 1907. However, under the more accepted narrow definition, this referred to Italian films that were based on loose plots around Greek mythology with giant muscle men and low budgets. The popular Sword and Sandal era was a period of roughly 10 years from 1957-1964 and started with the world-wide release of Hercules in 1957.. It kinda died out once the spaghetti westerns came around (giving Italian directors something else to do). Muscle Madness provides us with five films representative of the era including the likes of Steve Reeves, Alan Steel and Mark Forest. Let the cheesefest begin!

Giant of Marathon was made in 1959 under the Italian name: La battaglia di Maratona. The setting is 490 B.C. at the times of the Medic Wars. Philippides (played by Steve Reeves) has brought home to Athens the Olympic laurel crown and joins as commander of the Sacred Guard. Philippides is truly in love with Andromeda (played by Mylene Demongeot), daughter of Creuso who rejects him at first. However, there is a conspiracy afoot who try to influence Philippides with a seductive servant as well as brute force.

War of the Trojans was made in 1962 under the Italian name: La leggenda di Enea. It is also known as the Avenger. Steve Reeves returns as Aeneas (first seen in the 1960 movie: The Trojan Horse). After surviving the destruction of their city, Aeneas and the survivors have made their way to Italy where they will try to create a new life for the people. However, the land is not peaceful and the people struggle to keep their way of life and must battle to save it.

Hercules Against The Moon Men was made in 1964 under the Italian name: Maciste e la regina di Samar. Alan Steel is Hercules. The town of Samar has long been terrorized by Moon Men who demand children sacrifices. Queen Samara (played by Jany Clair) has made a deal with these aliens for years but Hercules is now in town and aims to stop it.

Goliath and the Sins of Babylon was made in 1963 under the Italian name: Maciste, l’eroe piu grande del mondo. Mark Forest would star as Goliath. Also featured in the film is Giuliano Gemma who plays Xandros. Goliath and his gang of merry men try to save the day from an evil ruler who must have twenty-four virgins for sacrifice.

The final film is called Colossus and the Amazon Queen and was made in 1960 under the Italian name: La regina delle Amazzoni. Rod Taylor plays Pirro and Ed Fury plays Glauco. Pirro and Glauco and a bunch of Greeks sail the unknown shores until they find themselves on an island of Amazons. Naturally, the Amazons imprison the Greeks but the Greeks soon show the women a good time if you know what I mean.

The only thing that these films really have in common with each other is that they were made in the heyday of sword and sandal flics and they all had a muscle man or two. The enjoyment here is really based on how much you take things seriously. If you are a staunch movie goer looking for historical accuracy and good acting, then you won’t find anything here. If you like to poke fun and laugh at stereotypes and poorly dubbed films, then you got a winner of a box set.

Actually, Hercules against the Moon Men was on Mystery Science Theater 3000, which kinda tells you how bad it truly is. The Reeves films are the only two that actually try to create a coherent story line but also come off as the most boring. Goliath and the Sins of Babylon is a weird gang of merry men picture and even includes the customary little person to provide laughs. At least in Colossus and the Amazon Queen, they already know they are in a comedy and do everything to play up to the laughs by providing slapstick and lots of beautiful women.

Muscle Madness did do one thing right, they did their best to remaster the video and put 4 of the 5 films in anamorphic widescreen at a 2.35:1 ratio. Colossus and the Amazon Queen is in 1.33:1 fullscreen but honestly I don’t think a widescreen print exists. Don’t be mislead, the quality (especially in the two Steve Reeves films) is pretty worn and haggard. Preservation was not these film’s strong suit and there are tons of specs and smatterings of grain. Hercules Against the Moon Men and Goliath & the Sins of Babylon are probably the best efforts and honestly, Retromedia did give this section a good effort.

The audio is provided in 1.0 Dolby Digital English dubbed Mono and for the most part, it isn’t much. Most of them films were originally done in Italian and then dubbed over to English. Since it is a mono track, the dialog stays in the center channel and the action does too. The sound hasn’t aged well for the most part and these are pretty substandard. No Subtitles either, so be sure to listen well.

There are no special features anywhere on the discs with the exception of a couple of extremely minor things. The exception is the Hercules & The Moon Men disc which contains a Theatrical Trailer & a Promo Booklet: Men!! How to be a Hercules. This looks like the things you would find in old comics where you send in a quarter and get a booklet how to not be a 98 pound weakling.

I think Rocky Horror Picture Show said it best, “We could take in an old Steve Reeves movie”. Of course, that was said by a sweet transvestite from Transylvania. To be honest, that is one of the few groups that will actually enjoy this sort of thing. The other group of people who will find enjoyment here are the type who will not take things seriously and try their best to make fun of the hour and a half epic in front of them. Retromedia does do a decent job here to bring five films to the forefront. The remastered video is a pleasant surprise but most people will hardly notice it. There aren’t any extras and the set could have used the Hercules disc to provide a documentary or two on the genre. All in all, if you enjoy the genre, then go for it. The rest; just stay away. 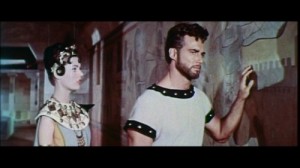 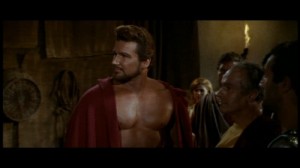 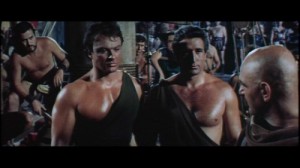 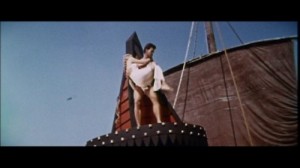 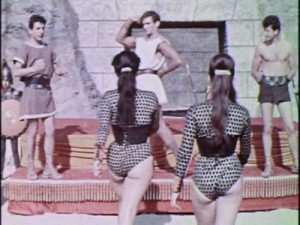 Michael Durr has been reviewing movies for the better part of fifteen years now. He primarily enjoys thrillers, sci-fi, animation and even a little courtroom drama. His favorite films include Escape from New York, the Goonies and anything with Alyssa Milano. When he’s not praising Kurt Russell as the greatest actor of our time or scratching his head over a David Lynch flick, he’s spending time at home in Texas with his lovely wife, Lori and his amazing son. How they put up with him is a mystery, but even Basil Rathbone doesn’t have the time to solve that one.
Dare to Play the Game Eden Log (Blu-ray)