Posted in: Disc Reviews by Michael Durr on September 21st, 2009

Some of you might remember my review of the first two volumes of X-Men, the Animated Series. After the first thirty plus episodes, I secretly hoped that I would be able to bring you reviews of the rest of the series. Luckily, I was blessed enough to make this a reality when I received volume 3 & 4 at my door just before my fall vacation. How sweet it is.

When we last left the X-Men at the close of the original Phoenix Saga, Jean Grey in the form of the Phoenix had defeated D’Ken and saved the universe from the power of the M’Kraan crystal. In such, the crystal (with D’Ken trapped inside) had to be taken far away and flown directly into the sun. Phoenix accepts this mission and the mind of Jean Grey says goodbye to her fellow X-Men.

For the next couple of episodes, we are re-introduced to Sauron who kidnaps Storm and then takes her back to the Savage Lands. He wishes to feed from her mutant energy and with the aid of mind-control, her will becomes unprotected and she turns against the X-Men. In turn, Garokk, a human mistaken for the Sun god and turned into rock a long time ago has awaken.

Garokk soon takes over the island and taps into the volcano granting the being immense power. Sauron returns to human form being tapped of power. The X-Men soon realize that the only way Garokk can be defeated is if Karl Lykos (Sauron’s human form) is allowed to feed on Garokk. The X-Men get close enough for this to occur, Sauron regains his pterodactyl form and defeats the petrified Garokk. Sauron despite his evil intentions allows the X-Men to leave.

A brief interlude occurs in the episode: Obsession. Here Archangel resumes his never ending plight to defeat Apocalypse. He’s found a weak spot (or so he thinks) in Apocalypse’s armor and tries to exploit it. The X-Men reluctantly join him and soon find a way to detain Apocalypse. They soon accomplish this with the aid of an ancient vessel and send him encased in a pod and shoot him far into the depths of space.

However, calm is not meant to last for long at the X-Men mansion. Jean Grey has returned. But her body is still united with the force of Phoenix who does not wish to leave her body. Rage and sensation overcome the Phoenix and Jean Grey must fight to retain control over her fragile existence. Things become more complicated when the Inner Circle Club led by Sebastian Shaw seek to gain the power of Phoenix and use it against the universe.

Jason Wyngarde (of the Inner Circle Club) with the help of Emma Frost creates an illusion to confuse Jean Grey in her Phoenix form. He sets her in a different time period with a different persona to make her think her X-Men history is just a terrible dream. The X-Men try to defeat the Inner Circle Club but find that Phoenix has turned evil and thirsts for more. Can the group not only defeat the Inner Circle but bring control to Jean Grey in the Dark Phoenix persona? If they can’t, then the fate of all of the universes might be in jeopardy.

The X-Men do it again. In two volumes and four discs of more entertaining episodes, they continue to establish a world that is not only exciting but brings out even more characters for us to enjoy. Nightcrawler, Iceman, Banshee as well as the groups X-Factor and Weapon X are introduced. Several important characters also re-appear including the Juggernaut, Sabretooth and Apocalypse. The depth of characters helps the interest level and the amount of stories makes us forget where the remote was.

Two rather important archs show up in these volumes that include the Dark Phoenix and the Beyond Good and Evil storylines. Several tiny 2-part stories also are produced and use continuity to go from one episode to the next. This continuity is important because it is also where these discs start to become inconsistent and get rather confusing. It’s the old story of air date vs script order.

The first two volumes of X-Men were easy to follow, they had a consistent story and it kept going for a long while. However, starting in season three, things became askew. Shortly after the original Phoenix Saga, episodes became random and the only logic was if it had multiple parts such as the 4-part Dark Phoenix story or the 2-part One Man’s Worth.

This is where volume three starts and the rest of the series continues in the future. Buena Vista decided to go with air date and therefore without some scrap of an external guide or heavy knowledge of the comics the average fan can and will get confused. It’s confusing and it is the only remotely negative thing I can say about the series. If you can push that aside, this series is an absolute enjoyment to watch.

The show is presented in 1.33:1 Fullscreen. Not much has changed from the previous volumes. The work here is thankfully the same style and if recognized Logan in the first couple of volumes, you’ll know good ole Wolverine here. Color is decent, just keep in mind that the series was made over fifteen years ago when dvds were barely a figment of your imagination.

The audio is provided in 2.0 English, Spanish and French Dolby Digital. Again, this is pretty much the same as past efforts. Simple stereo effects are used in various episodes but the action doesn’t stray too far from the center speaker. The dialog is clear despite the various odd accents that many of the mutants enjoy. English, Spanish and French subtitles are also included.

The animated series of X-Men remains something special to me. With each episode I crave more, and with each disc that follows, I think I should start reading comics again. The way X-Men provide great stories and ease with dealing with sensitive subjects should be commended. It’s a shame that Buena Vista took the easy way out when it came to continuity. They should have aimed for script order and they should have provided us with documentaries, commentaries, anything to boost the experience. In my heart, I do dread the final fourteen episodes (since they run all over the place), but hope I can bring you one final review in the greatest Marvel cartoon of all time. Recommended (just be sure to have a guide handy).

Disc 2
Have Yourself a Morlock Little X-Mas
The Lotus and the Steel
Love in Vain
Secrets, Not Long Buried
Xavier Remembers
Family Ties 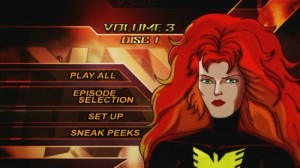 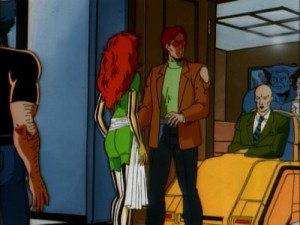 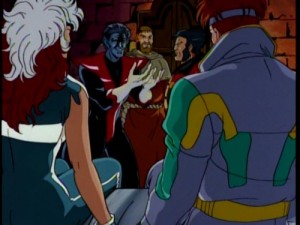 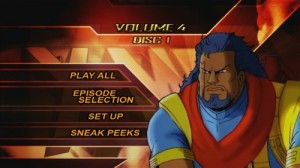 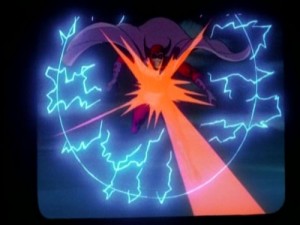 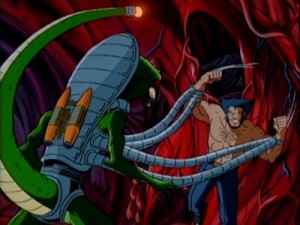 Michael Durr has been reviewing movies for the better part of fifteen years now. He primarily enjoys thrillers, sci-fi, animation and even a little courtroom drama. His favorite films include Escape from New York, the Goonies and anything with Alyssa Milano. When he’s not praising Kurt Russell as the greatest actor of our time or scratching his head over a David Lynch flick, he’s spending time at home in Texas with his lovely wife, Lori and his amazing son. How they put up with him is a mystery, but even Basil Rathbone doesn’t have the time to solve that one.
Iron Monkey (Blu-ray) Child’s Play (Blu-ray)