Posted in: Disc Reviews by Gino Sassani on August 14th, 2012 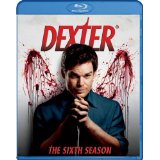 “Rituals are important. Not just for a serial killer.”

One of my favorite rituals happens about this time every year. That’s when Paramount releases the latest season of Dexter on Blu-ray and DVD. I don’t get Showtime, so it’s the only chance I get to get caught up with everyone’s favorite serial killer. Dexter’s back for more bloody murder and mayhem, and his world is just as dark and creepy as ever.

Dexter Morgan (Hall) is a forensic lab rat for the Miami-Dade Police. He really knows blood splatter. He should, because he moonlights as a killer. It seems that poor old Dex just can’t help himself. His parents were criminals, and he witnessed his mother’s brutal slashing by a chainsaw gang when he was just a young boy. He was adopted by Harry Morgan (Remar), a police officer. Harry saw the killer instinct in Dexter and taught him how to channel the urges for the sake of good. Dexter adopted Harry’s Code, which means he only kills others that he’s able to prove were killers themselves. His father continues to guide him through his own mind, meaning we get to see Pop even though he’s gone. Working for the police with his officer sister, Debra (Carpenter), Dexter is constantly just on the verge of getting caught. He has to adapt and evolve to avoid capture. Meanwhile Debra has several bad relationships including an on and off deal with bad boy cop Quinn played by Desmond Harrington.

“Most actors toil in obscurity, never stepping into the spotlight. But if you hone your craft, work diligently, you might just find yourself cast in the role of a lifetime.”

Talk about your perfect roles. The first thing that makes Dexter work is its star Michael C. Hall. You might remember Hall from his days on Six Feet Under, where he played the conflicted and very gay funeral director. His deadpan style and somewhat offbeat timing make him a perfect fit for these rather quirky characters. If you thought he was good as David Fisher, you’re simply going to love him as Dexter. It amazes me how different he looks and sounds. It was at first very difficult for me to actually identify him, he gets so completely immersed in character. You’ll find yourself rooting that Dexter doesn’t get caught, if for no other reason than you don’t want the show to end. The other actors and characters are also quite good. They include David Zayas as Detective Angel Batista, C.S. Lee as the lecherous lab tech Vince Masuka, and Lauren Valez as the head of the unit, at least for the first five seasons before she moves up to captain.

Dexter has new playmates this season. Edward James Olmos and Colin Hanks join the series as a couple of fun-loving religious freaks. Turns out they have a plan to bring about the Apocalypse, and it’s a rather bloody plan much to Dexter’s glee. Dexter also has a new friend in killer-turned-good-guy Brother Sam played by rapper Mos Def. It’s Dexter’s first friend who doesn’t share in his hobby

Things change at the station house for our crew. Sister Deb has been promoted to the station command and given the rank of lieutenant. It’s really payback from the Chief to LaGuerta. She gets the job Angel expected to get. It’s a bit unrealistic, of course, but I’ve seen much worse. There’s also a new hire at the station. Billy Brown joins the cast as Chicago transplant detective Mike Anderson. There’s a rather amusing B story that has Masuka hires a number of interns in an attempt to be impressive. A few of the interns backfire, so there’s a string of them. Aimee Garcia also joins the cast as Angel’s little sister and Dexter’s nanny for Harrison. It frees Dexter up for those extracurricular activities.

Finally, I liked that there are a few really nice nods to previous seasons. It plays out like a final season, but of course it isn’t. Dexter makes a side trip to Nebraska to tie up a loose end from the Trinity killer, and his brother shows up as a “ghost” to taunt him once again.

I’ve heard some complaints that this season was a bit weaker, but honestly, I found it better than season 5. If the season has a flaw it is that there do appear to be less actual Dexter killings. The murders by the religious kooks are just as inventive as previous seasons, and the performances are all rock-solid. Most important is the final seconds of the last episode. I won’t spoil the surprise, but I will tell you that Dexter’s life is about to change big time. The set comes out just in time to jump over a really sweet cliffhanger. “Don’t you just love it when things fall into place?”

Gino Sassani is a member of the Southeastern Film Critic's Association (SEFCA). He is a film and television critic based in Tampa, Florida. He's also the Senior Editor here at Upcomingdiscs. Gino started reviewing films in the early 1990's as a segment of his local television show Focus. He's an award-winning recording artist for Omega Records. Gino is currently working on his 8th album Merchants & Mercenaries. Gino took over Upcomingdiscs Dec 1, 2008. He works out of a home theater he calls The Reel World. Favorite films: The Godfather, The Godfather Part II, The Body Snatcher (Val Lewton film with Karloff and Lugosi, not the pod people film), Unforgiven, Gladiator, The Lion King, Jaws, Son Of Frankenstein, The Good, The Bad And The Ugly, and Monsters, Inc.
The Rookies: Season Two Contest: Win Barack Obama From Biography