“31 Nights Of Terror” Kindred: The Embraced – The Complete Series

Posted in: Disc Reviews by William O'Donnell on October 30th, 2013 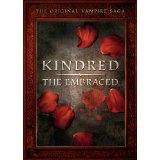 There are five clans of Vampires that are secretly living amongst humans. Said secret is maintained by a code of conduct called the “Masquerade” which states that vampires can never reveal themselves to a human; nor can they “embrace” (bite and convert) a human without approval from the highest council. Defying this means that your lengthy life is forfeit. A detective discovers the truth about the Masquerade when his girlfriend loses her life after defying these very rules, and he sets out to reveal the entire realm of vampires in San Francisco.

The vampire clans resemble mafia crime syndicates. They operate in secret to both hide their supernatural identities, and hide their financial operations; many of which have spanned centuries. So the story of the detective seeking to uncover the vampire world operates on different levels; revealing the truth behind the murders and other crimes these groups are committing, along with the aforementioned exposure of their supernatural lineage.

Despite the fact that many of the vampires are essentially underworld criminals, the core of this series seems to be stories designed to offer Pathos to (what should be) monsters. In the most obvious example, they set out to defy a lot of expectations by making the most gruesome character, the head of the “Nosferatu” clan, a vampire named Daedalus (whose appearance greatly resembled his clan’s namesake) the most sympathetic character by contrasting his violent assignments (he is often tasked with eliminating targets) with a artists lifestyle (he is a cellist and painter) while living in solitude. To add to this, his solitude is only broken when he has saves and starts sheltering a small human child who is suffering from cancer. While the rest of the vampires are the sexy assortment we come to expect in all vampire shows (starting with this show plus Anne Rice’s contributions and onwards) who compete for who can act more smug and cocky during confrontations, Daedalus’ long claws can be seen cradling an innocent youth with the care and concern of an adoptive father.

There is no shortage of melodrama in this series. The only time this truly feels cumbersome is with the nearly feature length first episode, where the every scene seemed to linger longer than it should have. Even the action scenes seem to move like molasses.

But despite some dull moments, there is still a very intriguing mythos in this series that is just aching for a reboot. Tragically, because of the death of leading man Mark Frankel, who very skillfully played vampire prince Julian Luna, there are limits to a cast reuniting for expanding on the established stories (although there are hints given in the special features about doing just that). But these characters and their world is much richer than most all of the current vampire tales (Twilight and Vampire Diaries have absolutely nothing on Kindred), so I wouldn’t be shocked if we see the clans on screen again soon.

Fullscreen. The picture is a little dampened, and isn’t exactly aided by the fact that (what with it being vampires and all) there are a great number of dark scenes. Although there are WAY more shots of vampires walking out in daylight than one would expect. They explain that if a vampire has recently fed on blood they can withstand daylight for a short time…I think it’s just easier to shoot in the daytime and the writer’s are saving the directors some grief. But I digress.

Dolby Digital 5.1 and English Stereo are available. Most of the sounds sit in the frontmost speakers but there is some decent spreading of the score and music into surrounding speakers. This is especially appreciated when a particular lounge plays Leonard Cohen and Morphine (whoever selected the music for this set piece had very nice taste).

Deleted Scenes: Only from select episodes. Certainly not crucial material.

Commentary by John Leekley, Peter Medak, Ralph Hernecker, and James L. Conway: This is a very interesting and insightful series of commentary tracks. There is a lot of talk of Film Theory (mostly due to Peter Medak’s presence) that should not go over non-film students head. One major bone I have to pick with Medak is his repeated reference to the necessity of making the camera inconspicuous when he does the EXACT opposite of that in certain key moments in the Pilot episode (which he directed). This is particularly bad in a scene where Daedalus emerges spookily within a morgue to attack a surgeon performing an autopsy. Medak has a love of long single takes with no cuts in his work (which is part reason for the idling I complained about earlier ) an as the camera follows the action of this scene it bumbles around in the all too apparent cadence of the camera’s man’s hurried footsteps. The camera could not be any more obvious in that scene. This makes me evaluate a lot of Medak’s high film art talk as a lot of pompous malarky.

Last Will and Testament of Daedalus: This is Jeff Kober returning as his character Daedalus. It is a video will made 17 years after the events in the final episode (true to the real time ending of the show). He is speaking to Abel, the boy with cancer I mentioned earlier in the review, who was turned into a vampire in order to survive his cancer sickness and has grown up (not sure if he did physically) to become a possible new leader of the clans for a monster has risen to destroy all vampires. This feature contains a lot of possible elements for feature stories, a huge fantasy element with the monster and the only piece of canon storytelling we get outside of the show itself.

The Kindred Chronicles – Genesis: Told through interviews and the occasional clip from the show, the creators and directors of the show, along with members of the main cast, reflect on the creation of the show. These people also touch on the rules of this vampire world a bit as it relates to the development of the show
And AGAIN Peter Medak mentions the unobtrusive camera and riles me up!

The Kindred Chronicles – Crafting the Myth: This portion of the two part featurette puts a bit more focus onto the creation of the character’s qualities and their placement within this fictional world. The actor’s speak with pure fondness for the show and a great revery for the mythos therein.

Kindred Requiem: A physical letter written by series creator John Leekly to introduce the Book of Nod to fans, both new and old.

Book of Nod: A very special treat for longtime fans. This book contains the myths written by Leekly which he based loosely on elements taken from the role-playing game “Vampire: The Masquerade.” This document was used for notes as the series was being shot. Few people had access to it while the series was being made, including the actors portraying the vampires, but now it is available to all.

The packaging is very appealing. The case with a hard cover appearance of a large book. Inside is a plethora of bonuses both paper and digital. Fans could not have asked for a better set.