Posted in: Disc Reviews by Brent Lorentson on October 30th, 2013 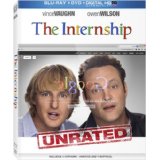 It’s hard to believe that once if you said the word Google, there is a good chance no one would have known what you were blabbering about.  Now the internet search database is the largest search engine on the web and is a dominating company that is given the same reverence Steve Jobs and Apple receive.  Because of Google, the days of hitting the books to find information and the Dewey decimal system are all but things of the past.  But technology and growth are a part of life.

Billy (Vince Vaughn, who also co-wrote the film) and Nick (Owen Wilson) are forty-something grinders who pound the pavement selling watches to their high-class clients.  Unfortunately for them, their boss, played by John Goodman,,has decided to call it quits with the watch business and retire.  With few skills and no other options, Nick takes a job at his sister’s boyfriend’s mattress shop, while Billy struggles to find where to go next.  This struggle is something most audiences will be able to relate to in the present job market as the film uses the current job market to delve into the opportunity for second chances and wrestling with regret.

It’s late at night when Billy does the unthinkable and Googles Google, and the opportunity for success strikes and he convinces Nick to join him as they embark on the journey to be interns at Google.  Separated into teams, Mick and Billy are paired with the rest of the outcast interns to form a team that reminded me of a smaller team of The Bad News Bears.   The team is made up of Yo-Yo (Tobit Raphael), Neha (Tiya Sircar), Stuart (Dylan O’Brien) and Lyle (Josh Brener).

Not only does the team have to deal with their personal differences with each other and themselves; there is Graham (Max Minghella) who steps up to be the films antagonist.  Personally I feel they made him a bit too much of a douchebag that it would be impossible for anyone to deal with someone this full of themselves and from the onset have nothing to show for it, though the scenes that play out between Billy and Graham are at times some of the more relatable ones; after all we’ve all encountered that person in our lives that enjoyed needling every fault and weakness and exploiting it.

As Billy wrestles with his insecurities, Nick on the other hand is doing all he can to steal the heart of Dana (Rose Byrne), who is an overworked Google executive who missed out on love for the sake of her career.  Of course we know how this is all going to turn out, but when Nick takes her on a date where he promises to make up for her ten years’ worth of jerks she’s missed out on, despite how hard he tries to be a jerk, Wilson manages to make it all sweet and charming.

With each of the challenges the team confronts, the group manages to grow closer together despite their close losses.  When the team does come together it is after a night of uninhibited fun where they all wind up at a strip club (watch the unrated version to fully appreciate the hilarity of this sequence as well as all the nudity).  Here the team finally cuts loose, and we get the chance to love these characters as they step out of their shells and embrace the moment.  Yoyo has a scene-stealing performance that was easily the most memorable and amusing moment of the film .

Though the film wasn’t well received by audiences during a lackluster summer, this is a film I believe will find an audience with time.  The casting and the heart of this film is what makes it work for me.  Sure, the unrated version has nudity and more bad language, but this is still a film that explores some issues that many forty-somethings as well as recently graduated twenty-somethings have to confront, and it has the feel-good spirit you find in most sports films.

The Internship is presented in its original aspect ratio of 2.35:1.  The 1080p image is arrived at with an AVC MPEG-4 codec at an average of 24 mbps.  The film starts out with a very plain desaturated appearance, but all that changes once the characters arrive at Google; the color palette changes as the colors in the Google logo are brought into frame and pop on the screen.  This isn’t a presentation that will melt anyone’s eye sockets, but the presentation delivers a sharp image.  The one noteworthy night shot between Nick and Dana is a beautiful shot that offers plenty of detail without feeling over-lit.

The DTS-HD Master Audio 5.1 track is just about what you would expect with this kind of comedy.  The dialog is clear, and that is what matters most in a film driven by the banter of Vaughn and Wilson.  The only scene I felt my speakers get put to work is during a team-building trip to a strip club where the music and other crowd activity takes advantage of the surround setup.

Audio Commentary with Director Shawn Levy:  This was a track that surprised me.  From start to finish Levy manages to deliver an amusing and insightful track about all points of the production of the film.  His insight in dealing with the audition process as well as adlibbing on set is something I think upcoming film makers should take some notes on.  He may not get into too much of the technical aspects of the film but this is a comedy, and Levy seems to know what he’s talking about without seeming full of himself.

Deleted Scenes: (8:26) A collection of forgettable scenes that you can easily understand how they managed to end up on the cutting room floor.  With the unrated cut containing the extended strip club scene everything else was simple fat to the film that wasn’t needed.  Though there is an amusing bit when Billy first comes home to find a foreclosure sign being put up and the altercation that follows.

Any Given Monday (17:52) This was a fun little bonus about the three-day shoot and everything that went into the Quiddich game scene.  Here we see everything from the rehearsals, the storyboards for all the key shots as well as how difficult executing a simple ball toss can be in Atlanta’s hundred degree heat.

Though The Internship may not go down as the most memorable film in Hollywood history, it still is worth giving a shot on Redbox or Netflix.  There’s something about the chemistry between Wilson and Vaughn that makes it nearly impossible to not be left in your recliner or love seat grinning.

Brent Lorentson is a horror writer and film critic based out of Tampa, Florida. With a BA in Digital Film, he co-wrote and co-directed Scavenger Hunt. His short stories have appeared in various horror anthologies. In 2019 his short script Fertile Blood will be a part of the anthology horror film Slumber Party. He is currently working on his first novel A Dark and Secret Place set to be released in late 2019. Favorite Films: Taxi Driver, Fight Club, I Saw the Devil, The Wild Bunch, Dawn of the Dead, A Clockwork Orange, Pulp Fiction, Heathers, The Monster Squad, and High Fidelity.
“31 Nights Of Terror” Kindred: The Embraced – The Complete Series Vikings: Season One (Blu-ray)